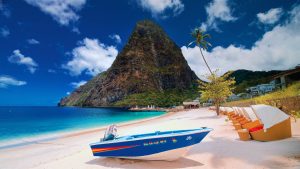 The earliest known inhabitants of St Lucia were the Arawaks, thought to have arrived from northern South America around 200-400 AD. Numerous archaeological sites on the island have yielded specimens of well-developed Arawak pottery. The Caribs gradually replaced the Arawaks in the period from 800 to 1000 AD.

The first Europeans landed on the island in 1492 or 1502, during Spain’s first exploration of the Caribbean. The British failed in their first colonisation attempts in the early 17th century. The island was first settled by the French, who signed a treaty with the indigenous Caribs in 1660. Like the British and Dutch, the French began to develop the island for the cultivation of sugar cane on extensive plantations.

Living conditions in the Caribbean were harsh and many slaves died before they lived long enough to have children. The French (and later the British) continued to import slaves until the latter nation abolished the trade and then the legal institution. At that time, people of African descent were far more numerous than those of European descent.

Thereafter, St Lucia was hotly contested between the two European powers until the British obtained it in 1814. It was part of the British colony of the Windward Islands. When the colony was dissolved, it joined the West Indies Federation (1958-62). In 1967, St Lucia became one of the six members of the West Indies Associated States, with internal self-government. It achieved full independence in 1979.

Saint Lucia's culture has been influenced by African, Indian, French and English heritage. One of the minor languages is St. Lucian Creole French, which is spoken by almost the entire population. Saint Lucia has the second highest ratio of Nobel laureates to total population of any sovereign country in the...