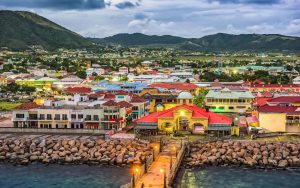 Things To See in Saint Kitts and Nevis

Of course, with an area of only 261 km2, St Kitts and Nevis has a somewhat limited (but not lacking!) range of typical sights. But this is no disadvantage for visitors to these two small islands, as they have all the enchanting natural beauty of the Caribbean.

Its strategic location made St. Kitts a focal point for colonisation and for European nations in their struggle for power over the West Indies. The settlers quickly developed sugar plantations and imported African slaves, laying the foundation for the islands’ colourful culture. The festivals, arts and crafts and other manifestations of this culture are now among the islands’ main tourist attractions, as are the ruins of the many plantations. The Scenic Railway, which follows the tracks of the old sugar railway, is a great way to see the best of it. But nothing makes the islands’ history more tangible than the impressive and well-preserved remains of Brimstone Hill Fort. This is a national park and UNESCO World Heritage Site that offers breathtaking views of the surrounding area and even some of the neighbouring islands. On Nevis, only a few ruins and a few cannons remain of Fort Charles, the Charlestown fortification.

Basseterre is a pleasant place and has some interesting sights, including St George’s Anglican Church and Independence Square, where the slave market was once located. The impressive 1894 Old Treasury building, originally the gateway to Basseterre, is an important historical site, but it also houses the National Museum, which has exhibits on the island’s history, identity and independence.

The island’s scenery is lovely, with panoramic views of green rainforest-covered hills as well as beaches and, of course, the bright blue sea. The main road around the island takes you to most of the sights, some great beaches and several villages. The hike to Mount Liamuiga, a dormant volcano on St. Kitts and the highest peak on the islands, is particularly popular and worth it for the great views from the top.

By air There are daily flights from San Juan, PR, with American Eagle, and via the British Virgin Islands/Tortola. American Airlines flies three times a week from Miami (more flights during the tourist season), twice a week to New York. Delta Airlines offers non-stop flights to St. Kitts from Atlanta.From...

By train There is a scenic rail tour that runs through parts of the narrow-gauge railway once used by the sugar mill. When more than one large cruise ship visits the island, organised train tours can fill the train. By car Taxis and buses are plentiful in St Kitts. Be sure to...

There are many dining options in St Kitts. Some of the most popular restaurants are: Sprat net - Vieille routeBallahoo Restaurant. Basseterre.Marshall's, Frigate Bay.Chevy's Beach Bar & Grill, Pinneys Beach, Nevis, +1 869 469-0055.PJ's Bar and Restaurant. Frigate Bay. There are many beach bars in Frigate Bay and on the south-eastern...

English is the only official language. St. Kitts Creole is also widely spoken. St Kitts and Nevis is known for a number of musical celebrations, including Carnival (18 December to 3 January in St Kitts). The last week of June is dedicated to the St Kitts Music Festival, while Culturama...