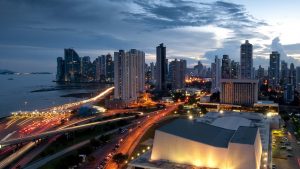 North AmericaPanamaHow To Travel Around Panama

There are two types of buses in Panama: those on the highway and the “city buses” (metro buses) that have replaced the Diablos Rojos (Red Devils).

The highway buses run constantly between the terminals in Panama City and various destinations along the Pan American Highway and then return to the terminal. The buses run relatively frequently and will pick you up or drop you off at any point along their route. The roughly linear shape of the country is ideal for a bus system, so ideal that you don’t really need a car to get to most areas. Take a bus to the intersection you want on the Pan American Highway. You can get on a bus anywhere on the Pan American Highway heading to Panama City, but a ticket is required for all trips out of the city. The city’s Grand Terminal is large and modern and will remind you of an American mall or airport (it is actually a mall too, the Albrook Mall). Timetables for all buses in Panama City can be found at HorarioDeBuses.com/pa.

When you want to get on a bus, stand at the side of the road, stretch out your arm and make clear gestures towards the ground. When you are on the bus and want to get off, shout “parada!” or tell the driver beforehand. You will get used to it very quickly. Locals are very helpful when it comes to tourists on the bus and may offer to help.

Buses on the highway are very cheap, costing about US$1 per hour of travel, sometimes less. An exception is the fare from Tocumen airport, for which buses and taxis charge a lot of money (by Panamanian standards) simply because they can.

The city’s buses are modern, air-conditioned and form the government-regulated metro bus system, which has been in operation since December 2010, replacing the old “Diablos Rojos” or “Red Devils” buses. Passengers must purchase a Metrobus card ($2), which can be loaded with amounts ranging from $0.50 to $50. A ride costs $0.25, or $1.25 if you use the Corredor Highway (south or north).

If your destination is far from the bus line, or if you just want to be lazy, taxis are also a decent way to get around Panama. Taxi fares are negotiated and vary by location. Most short taxi rides cost $2.5 and trips across town cost around $5. Unlike the city taxis you may be used to, they can take you far into the countryside.

A taxi ride from Tocumen Airport to Panama City can easily exceed the cost of the rest of your combined trip at a minimum of US$30. If you share a taxi ride with other passengers travelling from the airport to the city, the fare per person can be cheaper, at around US$12. You can save quite a bit of money by taking the bus to the Gran Terminal, but bus fares will also be higher than normal.

Panama is located in the south of Central America and can easily be discovered on your own. Panama’s road network is in very good condition (by Central and South American standards). You can rent a car and drive it around the country if you are an excellent defensive driver. Travelling by car allows you to discover attractions that are difficult or impossible to reach by public transport.

Panama City is more difficult to navigate than any other major city in the United States, with terrible rush hour traffic, few street name signs, poor street design and no traffic lights at busy intersections. You have to position your car aggressively to get ahead, while being very aware of the unpredictable and irrational behaviour of others. Drivers have little or no respect for the rules of the road, and drivers from North America or Western Europe will be amazed at their recklessness. In the rest of the country, driving is generally stress-free.

The Pan-American Highway is paved throughout the country and has many roads that branch off to towns outside the highway. Most of these roads are paved and most others are still easily navigable by sedan chair. However, road engineering standards are low, so watch out for undriveable curves, deep potholes and sharp turns without warning. It is strongly recommended to drive with good route knowledge. Use the detailed information on the Cochera Andina website to plan your trip and check road conditions, distances and driving times. Don’t forget to take a good road map with you on the way.

To drive in Panama, you need your country’s driver’s licence, but to avoid problems with police checks, it is best to carry an international driver’s licence as well. Traffic rules are almost the same as in Europe or the United States. Traffic signs are frequent. The speed limit is 40 km/h in the cities, 80 km/h outside the cities and 100 km/h on the highways. You will find petrol stations everywhere in Panama. Many stations are open 24 hours a day. Three types of petrol are available: unleaded, premium and diesel.

For driving on the Corredor Sur and Corredor Norte motorways, both of which are toll roads, the only means of payment accepted is the Panapass card; if you do not have one, you will have to pay a fine.

Local airlines serve many airports in Panama. Aeroperlas and AirPanama are the two local airlines. Flights from Panama City depart from Marcos Gelabert Airport in Albrook.

Private aircraft charters can be booked online and through local companies.

It is advisable to check the tail number of any aircraft chartered in Panama. All registered aircraft approved for public charter (air taxis) have a letter after their registration number (e.g. HP-0000TD). This means that the aircraft is insured for charter operations and is subject to more inspections and maintenance requirements.

Take the Panama Canal Railway from Panama City to Colón or vice versa. The first train ran on this line in 1855 (although the line has since been abandoned and rebuilt in standard gauge) and it was the first interoceanic railway in the Americas, preceding the transcontinental railway in the US by a decade and a half. Although the main purpose of the railway is freight, a passenger train runs once a day in each direction and is marketed as a luxury train to justify the $25 one-way fare.