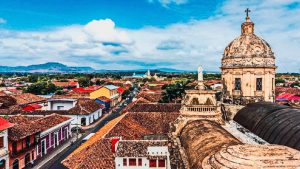 Nicaragua has made considerable progress in terms of police presence and order throughout the country. Crime is relatively low. However, starting in 2008, reports of low-level gang violence began to come from Honduras and El Salvador. The Nicaraguan National Police have been successful in arresting gang members and reducing organised crime.

Do not travel alone at night. Pay for a taxi to avoid being mugged in poorly lit areas. Tourists are advised to be vigilant at all times in Managua. Although gang activity is not a major problem in Managua or Nicaragua, caution is advised. Tourists are advised to travel in groups or with a trusted person who understands Spanish. There are local organisations that offer translation or guide services. One such organisation is Viva Spanish School Managua.

Tourists are also advised not to use foreign currency for local transactions. It is better to have the local currency than to have to convert with individuals on the street or in non-touristy areas. Banks in Nicaragua require identification for all currency conversions. Use ATMs that dispense the local currency. When using ATMs, take precautions and be aware of your surroundings.

Buses can be extremely crowded and cramped. There is usually a luggage rack available for storing bags and other items. However, it is recommended that tourists always keep their bags within easy reach and sight, and perhaps put a lock on the bag. A good idea is to have a smaller bag for items you absolutely cannot afford to have stolen and never leave them out of sight.

Shared taxis are also risky because organised crime flourishes in this transport sector because of the fixed passengers. In other words, the drivers already know who they are taking and can therefore attack the one extra passenger. However, this crime is not common. Tourists are strongly advised to close the windows of their taxis, as open-window muggings occur in Managua’s (frequent) traffic jams and at red lights.

Although extensive demining operations have been carried out to clear rural areas in northern Nicaragua of landmines left over from the civil war of the 1980s, visitors venturing into these areas off the main roads are warned that landmines can still be encountered.

You will need some money to cross international borders. Nicaragua charges a border duty of US$10 to US$13 (depending on the “administrative tax”). This is in addition to a CA-4 visa that allows you to cross the borders between Nicaragua, Honduras, El Salvador and Guatemala. According to the treaty that establishes this visa, border officials are not supposed to check people with such visas, but they do anyway and charge tolls, which they call visa fees for crossing the border.

According to the US State Department’s consular bulletin for Nicaragua, tap water in Managua is safe to drink, but bottled water containing chlorine is always the best choice. The water in Esteli is particularly good because it comes from deep wells. Bottled water is readily available, with a gallon costing about one US dollar in a supermarket.

Due to the tropical latitude, insects fly in abundance. Be sure to use a mosquito repellent containing DEET, especially when travelling to more remote areas (Isla Ometepe, the Rio San Juan region or the Nicaraguan Caribbean).

Dengue fever occurs in some areas and is caused by a type of mosquito that flies mainly between dusk and dawn. Malaria is not a serious problem unless you travel to the Caribbean coast or along the Rio San Juan, east of San Carlos. A doctor may advise you to get vaccinated against hepatitis A and typhoid before travelling to Nicaragua.

Although there is a public health system and many public hospitals, they are not a good option for tourists except in the case of a serious emergency, and then only until a private hospital can send an ambulance. However, they can usually treat minor problems just as well as any outpatient doctor and do not charge you anything. There are several private hospitals, in order of quality, from best to worst: Hospital Metropolitano Vivian Pellas on the Carretera Masaya Km 10, Hospital Bautista, Hospital Militar near Plaza Inter and several others.

Private hospitals are much cheaper than in the United States: in 2009, a private room with a private nurse at the Metropolitano cost $119 per day. A knee MRI in 2010 cost $300. Emergency surgery in 2008 at Bautista cost $1,200, including surgeon, anaesthesia, operating room, recovery room and supplies, after which a private room cost less than $100.