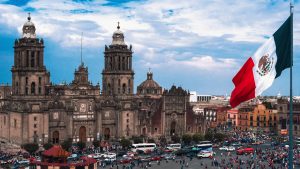 Mexican cuisine is best described as a collection of different regional cuisines rather than a standard list of dishes for the entire country. Due to climate, geography and ethnic differences, we can divide Mexican cuisine into four broad categories, depending on the region:

Ask for the town’s “platillo tipico”, this is the local speciality that you may not find anywhere else, a variation or the birthplace of a recipe, also bear in mind that most recipes change from one place to another, such as the tamales, which are made with the leaves of the banana plant in the south, and in the Huasteca region the tamales are very large (they are called “zacahuil”), we are OK for a whole family.

Traditional Mexican food can often be very spicy; if you are not used to peppers, always ask if your food contains them. (“Esto tiene chile? Es picante?”).

There are many food carts in the streets of Mexican towns and villages. Travellers are advised to eat in these carts with caution, as the hygienic preparation practices are not always reliable. In doing so, you may (or may not) find some of the most unique and authentic Mexican food you have ever eaten. At these vendors you will find tacos, hamburgers, bread, roasted field corn or elote served with mayonnaise or light cream and sprinkled with fresh cottage cheese, roasted sweet potatoes called camote, and almost any kind of food and service you can imagine.

You can judge the quality of food by its popularity. Do not eat in out-of-the-way places, even if they are restaurants or hotels. Remember that Mexicans have their main meal in the middle of the afternoon (around 3 p.m.), while breakfast or “almuerzo”, a mid-morning affair, is very early in the morning after a very light snack, such as a small plate of fruit or a roll with coffee. However, many Mexicans eat a big breakfast in the morning. Later, in the evening, the meal varies from a very light meal, such as sweet rolls or breads, coffee or hot chocolate, to a heartier meal, such as pozole, tacos, tamales, etc. Plan your meals accordingly and you will have a better idea of the occupancy (popularity) of a restaurant.

Tap water is harmless, but is generally not recommended for consumption. Some exaggerators even claim that tap water is not suitable for brushing teeth. Hotels usually give their guests one (large) bottle of drinking water per room per night. Bottled water is also readily available in supermarkets and at tourist attractions.

There are also some Mexican beers, most of which are available outside Mexico, including Corona (popular, but not necessarily as popular in Mexico as many foreigners think), Dos Equis (XX) and Modelo Especial.

Lighter Mexican beers are often served with lime and salt, although many Mexicans do not drink beer this way. In some places, beer is served as a ready-made drink called “michelada” or simply “chelada”. The recipe varies from place to place, but it is usually beer mixed with lime juice and various sauces and spices on ice, served in a glass with a salty rim. Another variation called “Cubana” contains the Clamato cocktail, soy sauce, salt and some hot sauce.

Northwest Mexico, including Baja California and Sonora, also produces wines. Mexican wine is often quite good, but most Mexicans tend to prefer European or Chilean imports.

The legal minimum age for drinking alcohol in Mexico is 18, but it is not strictly enforced. In many places, drinking alcohol in public (“open container”) is illegal and usually punishable by one day in jail. Watch out for waitresses and bartenders, especially in nightclubs. If you don’t know how much you are drinking and how much you have already spent, they may add a few extra drinks to your account. Some do, but not all.

Alcoholmeters are widely used in road traffic. Driving under the influence of alcoholic beverages is punishable by 1 to 3 days in prison.

Mexico, especially the southern state of Chiapas, produces excellent coffee. Very popular is the coffee con leche, which usually consists of one part coffee and one part steamed milk. Unfortunately, many places in Mexico that are not cafés serve Nescafe or other instant coffee – you have to look for the right coffee, but it is there.

By plane From the United States and Canada Hundreds of daily flights connect Mexico with cities and towns across North America. These include traditional airlines such as Air Canada, Aeromexico, Alaska Airlines, American Airlines, Delta, etc., as well as low-cost carriers such as JetBlue, Spirit, WestJet, Virgin America and Southwest Airlines....

Mexicans have a somewhat relaxed sense of time, so be patient. It is common to be 15 minutes late. When someone, even a complete stranger, sneezes, you always say "¡salud! ("to your wishes" or, more literally, "to your health"): otherwise it is considered rude. In rural areas, especially in central...

Mexican culture reflects the complexity of the country's history through the mixture of indigenous cultures and Spanish culture transmitted during the 300 years of Spanish colonisation of Mexico. Exogenous cultural elements were incorporated into Mexican culture over time. The Porfirian era (el Porfiriato), in the last quarter of the nineteenth...

Pre-Columbian Among the first complex civilisations in Mexico is the Olmec culture, which flourished on the Gulf Coast around 1500 BC. The Olmec culture spread throughout Mexico in the formative cultures of Chiapas, Oaxaca and the Mexico Valley. In central Mexico, the heyday of the classical period saw the rise of...