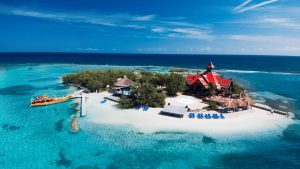 Jamaica has the fifth highest homicide rate in the world. As in any other country, in an emergency, after calling 119 for the police or 110 for the fire brigade or ambulance, you should contact your government’s embassy or consulate. Governments generally advise travellers who will be in Jamaica for an extended period of time to notify their embassy or consulate so that they can be contacted in the event of an emergency.

If you are approached by a Jamaican who wants to sell you drugs or something else you don’t want to buy, the conversation will most likely go like this: “Is this your first time on the island?” Reply, “No, I’ve been here many times” (even if it’s not true or he thinks you’re gullible). Next, he will ask you, “Where do you live?” Respond with a vague answer: for example, if you are asked about Seven Mile Beach, respond with “Down the street”. If you are asked, “Which resort? “, reply with another vague answer. You will see that you are neither stupid nor fooled. You will give the appearance of having a friendly conversation but as soon as you are labelled a fool (e.g. “I am here for the first time” “I am staying at Negril Gardens”) you will be harassed. If they continue to push you to buy drugs or anything else, calmly tell them “I have been to this island many times: don’t waste your time trying to sell me something. I am not interested. They should leave you alone, they may even say “respect” and clench their fists.

Marijuana (known locally as ganja), although cheap, abundant and potent, is illegal on the island. Foreigners can be arrested and jailed for drug use. Jamaican prisons are very basic and are places you want to avoid at all costs.

If you need the police, call 119 but do not expect them to come immediately.

Drugs and alcohol are common. Armed men can pose a threat to women in some areas. Central areas of the island, such as Spanish Town and some areas of Kingston (Trench Town, etc.), should also be avoided during the day. However, those wishing to visit the Culture Yard in Trench Town should be safe if they go in daylight and with a local guide, which should not be very expensive. Seek advice from the locals before visiting and avoid travelling during the pre-election period when violence breaks out.

The months of September, October and November are less popular with tourists because of the hurricane season. Therefore, police are encouraged to take their leave during this time. This reduction in the police force can make areas like the trendy Montego Bay area less safe than they normally are.

Medical facilities on the island do not always meet European or American standards of health care. If you fall ill, this can sometimes lead to considerable medical costs. Therefore, take out travel insurance to give you peace of mind in case of emergency.

Tap water is generally good and safe to drink. All tap water in Jamaica is treated to international standards and is of the same quality as you would expect in North America or Europe. In rural areas, the water supply can sometimes be interrupted for several hours at a time. People in rural areas have their own water tanks that collect water when it rains, so be prepared to draw from a tank rather than turn a hose. Water from these sources must be boiled before consumption. Bottled water such as Wata (a local brand), Aquafina and Deer Park are available everywhere.

Pay attention to the water quality at public beaches, such as the “Walter Fletcher Beach” in Montego Bay, which is called “Dump-up Beach” by some locals and is located near the northern gorge. During storms, large amounts of solid and human waste flow into the gorge. The water flowing from Dunn’s River Falls is also said to contain high levels of coliform bacteria, a sign of faecal contamination.

A malaria outbreak in Kingston in 2006 was identified and contained, and Jamaica regained the malaria-free status it had enjoyed for decades before this localised and isolated incident.

As in most parts of the Caribbean, dengue fever is an increasing risk. It usually manifests as a flu-like illness with severe joint and muscle pain, vomiting and a rash that can be complicated by haemorrhagic shock. It is transmitted by Aedes mosquitoes, which bite during the day and prefer densely populated areas such as Kingston, although they also inhabit rural settings. There is no vaccine or other prophylaxis available. So use insect repellent if you can’t bear to be covered from head to toe in the humid tropical heat.

Food in Jamaica Jamaican food is a mix of Caribbean and local dishes. Although Jamaican food has a reputation for being very spicy, local trends tend towards a variety of more versatile dishes. Some of the Caribbean dishes you will see in other countries in the region are rice and...

Music Although it is a small nation, Jamaican culture has a strong presence around the world. The musical genres of reggae, ska, mento, rocksteady, dub and more recently dancehall and ragga have all emerged from the island's vibrant and popular urban record industry. Jamaica also played an important role in...