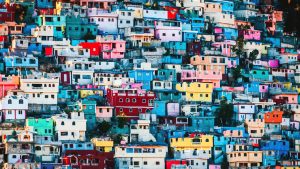 Haiti has a unique cultural identity made up of a broad mix of traditional French and African customs, mixed with significant contributions from Spanish and indigenous Taino culture. The country’s customs are essentially a blend of the cultural beliefs of the various ethnic groups that have inhabited the island of Hispaniola. Haiti’s culture is reflected in painting, music and literature. Galleries and museums in the United States and France have exhibited the works of some of Haiti’s best-known artists.

Haitian art is characterised above all by its paintings and sculptures, which are known for their diverse forms of artistic expression. Bright colours, naïve perspectives and mischievous humour characterise Haitian art. Common themes of Haitian art are large delicious foods, lush landscapes, market activities, jungle animals, rituals, dances and gods. Artists often paint fables. People are dressed up as animals and animals are transformed into people.

Due to a deep history and strong African ties, symbols have great significance in Haitian society. For example, a rooster often represents Aristide and the red and blue colours of the Haitian flag often represent his Lavalas party. Many artists group themselves into “schools” of painting, such as the Cap Haitian school, which shows representations of daily life in the city; the Jacmel school, which reflects the steep mountains and bays of this coastal city; or the Saint-Soleil school, which features abstract human forms and is strongly influenced by Vodou symbolism.

Haitian music combines a variety of influences from the many peoples who have settled on this Caribbean island. It reflects French, African, Spanish and other elements that inhabited the island of Hispaniola, as well as minor influences from the indigenous Taino. Music styles unique to the Haitian nation include music derived from vodou ceremonies, rara parade music, twoubadou ballads, mini-jazz rock bands, rasinmovement, hip hop kreyòl, méringue and compas. Young people attend parties in nightclubs called discos (pronounced “deece-ko”) and go to the bal. This term is the French word for ball, as in a formal dance.

The compas (konpa) (also known as compas direct in French or konpa dirèk in Creole) is a complex and changing music derived from African rhythms and European social dances, mixed with Haiti’s bourgeois culture. It is a sophisticated music whose basic rhythm is the méringue. Haiti had no recorded music until 1937, when Jazz Guignard was recorded in a non-commercial way.

Haitian cuisine is the result of several culinary styles of the various historical ethnic groups that populated the western part of the island of Hispaniola. Haitian cuisine is similar to that of the rest of the Latin Caribbean (the French- and Spanish-speaking countries of the West Indies), but differs in many ways from its regional counterparts. Although the cuisine is simple and unpretentious, the flavours are bold and spicy and show a primary influence of African culinary aesthetics combined with a very French sophistication with notable derivatives of indigenous Taíno and Spanish techniques. Although similar to other cooking styles in the region, it has its own uniqueness; many visitors to the island have mixed reviews of Haitian cuisine. Haitians often use chillies and other strong flavours.

The dishes are usually generously spiced. Therefore, Haitian cuisine is often moderately spicy. However, several foreign cuisines have been introduced into the country. These include Levantine cuisine, which originated from the Arab migration to Haiti. Rice and beans, in various forms, are eaten throughout the country, regardless of location, and have become a kind of national dish. They form the basis of the diet, which is very starchy and rich in carbohydrates. Rural areas that have better access to agricultural products offer a greater variety of choices.

One such dish is ground maize (mayi moulen), which resembles oatmeal and can be eaten with pea sauce (sòs pwa), a bean sauce made from one of the many types of beans such as kidney, pinto, chickpea or pigeon pea (known as gandule in some countries). Maize moulin can be eaten with fish (often red snapper) or alone, depending on personal preference. Among the many plants used in Haitian dishes are tomatoes, oregano, cabbage, avocado and peppers. A popular food is banana pesée (ban-nan’n peze), flattened slices of plantain deep-fried in cooking oil (known as tostones in Spanish-speaking Latin America). It is eaten both as a snack and as part of a meal, often accompanied by tassot and griot (fried goat and pork).

The dish Haitians traditionally eat on Independence Day (1 January) is Joumou soup. Haiti is also internationally known for its rum; Barbancourt rum is the most popular alcoholic beverage in Haiti and is highly regarded internationally.

Monuments include the Sans Souci Palace and the Laferrière Citadel, which was inscribed on the World Heritage List in 1982. Located in the Massif du Nord, in one of Haiti’s national parks, the structures date from the early 19th century. The buildings were among the first to be constructed after Haiti’s independence from France. The Citadelle Laferrière, the largest fortress in the Americas, is located in northern Haiti. It was built between 1805 and 1820 and is now considered by some Haitians to be the eighth wonder of the world.

Jacmel, a colonial town provisionally inscribed on the World Heritage List, was severely damaged by the 2010 Haiti earthquake.

The anchor of Columbus’ largest ship, the Santa María, is now in the Museum of the Haitian National Pantheon (MUPANAH) in Port-au-Prince, Haiti.

Haiti is known for its folkloric traditions. The country has fairy tales that are part of the Haitian Vodou tradition.