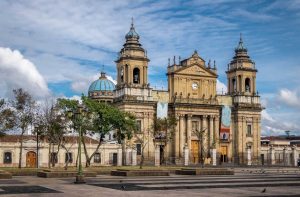 North AmericaGuatemalaHow To Travel Around Guatemala

It’s hard to miss the brightly coloured buses that fill the streets of Guatemala’s big cities and highways. These are chicken buses, or camionetas in Spanish, and are a common mode of transport for Guatemalans and an adventure for tourists. They are much cheaper than tourist buses or taxis and are usually very crowded, with three people squeezing into seats barely big enough for two children and others standing in the aisles.

The buses are often second-hand North American school buses with the logos “Blue Bird” and “Ford”. In addition to the driver, there is usually a conductor in the door – these people are often very rude and can even be dangerous if you tell them something you don’t like (e.g. turn down the volume of their subwoofers, which is often used in nightclubs). The driver collects the fare and occasionally jumps out to steer the bus through a blind intersection or sharp curve. On highways, chicken bus drivers are aggressive and do not hesitate to overtake in oncoming traffic. Driving these buses on the steep roads of the western highlands is particularly gruelling, but it is perhaps the most typical Guatemalan experience. It should be mentioned that many people are regularly killed in these harrowing experiences when these buses collide with other vehicles, fly into a ravine or overturn and spin around on the highway, dismantling the bus and serving as a blender and crusher for the passengers inside.

Bus drivers sometimes charge foreign tourists more than the usual fare. If you look at what other travellers pay, you can usually avoid this problem. By sending a message to the Guatemalan tourist office Inguat [www], you inform them about this problem.

You can get on a Chicken Bus almost anywhere along its route. When you reach out, it stops. You get on and find a place to sit or stand. Once the bus has started, the driver comes back to you to collect your ticket. You need to know where your stop is and get to the door in time. You ask the bus to stop more or less where you want to get off.

Bus robberies are similarly common on the highway, in the countryside and in the capital itself. Usually several people, one or more in the front, middle and back of the bus stand up, draw their weapons and announce a robbery, or simply a group of people – or even children – surround you and demand your belongings. Sometimes this is part of the bus drivers’ routine, sometimes the drivers even organise these robberies.

Guatemala City has a local trolley service for tourists.

There is a rail network, but with the exception of an occasional steam transport for tourist groups, no trains have been running since 2007, neither in freight nor in passenger traffic.