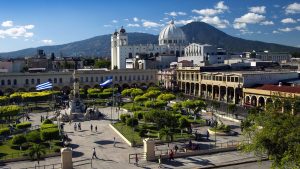 If you are travelling by car, there are car rental companies such as Alamo and Hertz. Buses and taxis are also a good way to get around. The distances between tourist attractions make walking an unpopular option, as does the layout of the city’s streets; San Salvador is not a square city, but has long avenues that are straight and streets that are not. In some neighbourhoods, however, walking is a good option, such as in the Zona Rosa.

El Salvador now has a well-developed GPS navigation system called QFind [www] to help you find your way around urban or rural areas. It is a fully functional system with thousands of points of interest and a turn-by-turn route to your destination.

Another option for luxury transport is Linea Ejecutiva [www], they offer private transfers. If you wish, you can contact the Convention Bureau of El Salvador to visit the country.

All rail transport in El Salvador ceased in October 2002.

In 2006, a pilot project was launched to revitalise the rail network and in 2007, a service between San Salvador and Apopa was relaunched with two return trips in the morning and evening for commuters. Although this service is of little use to passengers, it is hopefully a sign for the future reopening of other parts of the extensive rail network.

There are many buses that run on the country’s highways. National bus routes are generally very cheap (no more than two or three dollars for the longest routes) and difficult to understand, except that they are numbered consistently. The one- and two-digit numbers indicate local, inner-city routes, while the three-digit buses run between towns and villages. The buses themselves are often beautifully painted and adorned with all sorts of posters and trinkets, from religious to pop culture. Chaotic as it may sound, they run regularly and frequently. Longer journeys may include a stop in a town where many mujeres and sometimes their children get on to sell mangoes, nuts, water and sometimes even fried chicken in a box. There is no central office that coordinates bus routes and schedules. You can only check HorarioDeBuses.com to get an idea of which bus to take to get to your destination and from where. The site also has a map showing where the bus stops are. The best thing to do is to ask the cobrador or anyone at the bus station where and when the bus leaves. Most are very friendly and helpful, but beware of bus scammers.

Notice. Anyone travelling by bus (visitors or locals) must beware of the buses and microbuses that can be seen all over the country. Buses are often overcrowded and it is very easy to get robbed. Buses are cheap and a good way to get around, but remember that as a visitor you are at a higher risk of being robbed. If you have to travel by bus, be very careful with yourself and your belongings.

By air Visitors arriving by plane usually land at El Salvador's international airport in Comalapa (IATA: SAL), which is 50 km or a 45-minute drive south of the capital. Avianca is the national airline of El Salvador. Taca officially merged with Avianca Holdings in May 2013 and uses the Avianca brand...

El Salvador's landscape is breathtaking, with volcanoes and mountains offering "green" adventurers just what they are looking for. Many environmentally-oriented community organizations promote ecotourism, and a number of beautiful and secluded beaches and forests are scattered throughout the country. A well-maintained and almost deserted national park lies to the west,...

From the pre-Columbian period to the beginning of independence El Salvador's civilisation dates back to pre-Columbian times, around 1500 BC, as evidenced by the ancient structures of Tazumal in Chalchuapa. The Spanish admiral Andrés Niño led an expedition to Central America and landed on the island of Meanguera, located in the...

Stay Safe in El Salvador El Salvador has a bad reputation because of the civil war in the 1980s. According to the U.S. State Department, El Salvador has one of the highest murder rates in the world. Crime is a problem largely attributed to street gangs, although statistics from official...