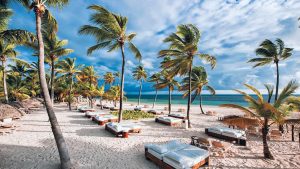 The culture and customs of the Dominican people have a European cultural base influenced by African and indigenous Taíno elements; culturally, the Dominican Republic is one of the most European countries in Spanish America, along with Puerto Rico, Cuba, central Chile, Argentina and Uruguay.

European, African and Taino cultural elements are evident in cuisine, architecture, language, family structure, religion and music. Many Arawak/Taíno names and words are used in everyday conversation and for many foods native to the Dominican Republic.

The architecture of the Dominican Republic represents a complex mix of different cultures. The profound influence of European settlers is most evident throughout the country. This style, characterised by ornate designs and baroque structures, is particularly visible in the capital Santo Domingo, home to the first cathedral, castle, convent and fortress in the Americas, located in the city’s colonial zone, an area declared a World Heritage Site by UNESCO. The motifs can be found in the villas and buildings of the country. It can also be seen on buildings with stucco exteriors, arched doors and windows and red-tiled roofs.

The indigenous peoples of the Dominican Republic have also had a significant influence on the country’s architecture. The Taíno people relied heavily on mahogany and guano (dried palm leaves) to make crafts, art, furniture and houses. By using clay, thatched roofs and mahogany, they gave the buildings and the furniture they contained a natural look that blended perfectly with the island’s environment.

More recently, with the rise of tourism and the increasing popularity of the Dominican Republic as a Caribbean holiday destination, architects in the country have begun to incorporate cutting-edge designs that emphasise luxury. An architectural playground, villas and hotels are implementing new styles while offering new interpretations of the old. This new style features simplified, angular angles and large windows that merge exterior and interior spaces. Like the culture as a whole, contemporary architects draw from the rich history and diverse cultures of the Dominican Republic to create something new. When looking at modern villas, you can find any combination of the three main styles: a villa may include a modernist angular design, Spanish colonial style arched windows and a traditional Taino hammock on the bedroom balcony.

Dominican cuisine is predominantly Spanish, taino and African. The typical cuisine is quite similar to that of other Latin American countries, but many of the names of the dishes are different. One of the breakfast dishes consists of eggs and mangú (cooked and mashed plantains). In heartier versions, mangú is accompanied by fried meat (usually Dominican salami) and/or cheese. As in the Spanish tradition, lunch is usually the largest and most important meal of the day. It usually consists of rice, meat (chicken, beef, pork or fish), beans and a portion of salad. “La Bandera” (literally “the flag”) is the most popular lunch dish; it consists of meat and red beans on white rice. Sancocho is a stew often made with seven different kinds of meat.

Meals tend to favour meat and starch over dairy products and vegetables. Many dishes are prepared with sofrito, a mixture of local herbs used to baste meat and sauteed to bring out the full flavour of the dish. Throughout the south central coast, bulgur or whole wheat is a main ingredient in quipes or tipili (bulgur salad). Other Dominican favourites are chicharrón, yuca, casabe, pastelitos (empanadas), batata, yam, pasteles en hoja, chimichurris and tostones.

Musically, the Dominican Republic is known for the globally popular style and genre of music known as merengue, a lively and fast type of rhythm and dance music with a tempo of around 120 to 160 beats per minute (although this varies), based on musical elements such as drums, brass instruments, string instruments and accordion, as well as some elements specific to the Spanish-speaking Caribbean, such as the tambora and güira.

Merengue became popular in the United States, especially on the East Coast, in the 1980s and 1990s, when many Dominican artists living in the United States (especially New York) began performing in the Latin club scene and getting airplay on the radio. Among them were Victor Roque y La Gran Manzana, Henry Hierro, Zacarias Ferreira, Aventura and Milly Jocelyn Y Los Vecinos. The emergence of bachata, as well as the increase in the number of Dominicans living among other Latino groups in New York, New Jersey and Florida, contributed to the overall growth in the popularity of Dominican music.

Bachata, a music and dance form that originated in the countryside and rural outskirts of the Dominican Republic, has become very popular in recent years. Its themes are often romantic; stories of heartbreak and sadness are particularly common. In fact, the original name of the genre was amargue (“bitterness”, or “bitter music”, or blues music) until the more ambiguous (and neutral) term bachata became popular. Bachata evolved from the pan-Latin American romantic style called bolero, to which it is still closely related. Over time, it was influenced by the merengue and a variety of Latin American guitar styles.

Palo is an Afro-Dominican sacred music found all over the island. The drum and the human voice are the main instruments. The palo is played at religious ceremonies – usually at the religious festivals of the saints – as well as at secular celebrations and special occasions. It has its roots in the Congo region of west-central Africa, but its melodies are coloured with European influences.

Salsa music enjoys great popularity in the country. In the late 1960s, Dominican musicians like Johnny Pacheco, creator of the group Fania All Stars, played an important role in the development and popularisation of the genre.

Dominican rock is also popular. Many, if not most, of its performers are based in Santo Domingo and Santiago.

Some of the most important symbols of the Dominican Republic are the flag, the coat of arms and the national anthem entitled Himno Nacional. The flag has a large white cross that divides it into four quarters. Two quarters are red and two are blue. The red represents the blood shed by the liberators. The blue represents God’s protection of the nation. The white cross symbolises the liberators’ struggle to leave a free nation for future generations. According to another interpretation, the blue stands for the ideals of progress and freedom, while the white symbolises peace and unity among the Dominicans.

In the centre of the cross is the Dominican coat of arms, in the same colours as the national flag. The coat of arms shows a red, white and blue shield draped with a flag, a Bible, a golden cross and arrows; the shield is surrounded by an olive branch (left) and a palm branch (right). The Bible traditionally stands for truth and light. The golden cross symbolises redemption from slavery, and the arrows symbolise noble soldiers and their military pride. A blue ribbon above the shield reads “Dios, Patria, Libertad” (meaning “God, Country, Freedom”). A red band below the shield reads “República Dominicana” (Dominican Republic). Among all flags in the world, the depiction of a Bible is unique to the Dominican flag.

The national flower is the Bayahibe rose and the national tree is the West Indian mahogany. The national bird is the Cigua Palmera or Palm-throat (“Dulus dominicus”).