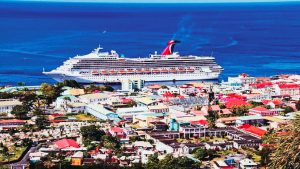 Dominica is home to a variety of population groups. Although historically inhabited by several indigenous tribes, it was occupied by the Arawak (Taino) and Carib (Kalinago) tribes when European settlers reached the island. “Massacre” is the name of a river that commemorates the murder of indigenous people by French and British settlers, as the river ran red with blood for days. The French and British tried to claim the island for themselves and imported slaves from Africa as labour. The remaining Caribs now live in a 15 km2 area on the east coast of the island. They elect their own chief. Today’s culture has emerged from this mixing of cultures.

Music and dance are important facets of Dominican culture. A variety of traditional songs and dances are performed at the annual independence celebrations. Since 1997, there have also been weeks of Creole festivals, such as “Creole in the Park” and the “World Creole Music Festival”.

Dominica gained international attention in 1973 when Gordon Henderson founded the group Exile One and its own genre of music, which he called “Cadence-Lypso”. This paved the way for modern Creole music. Other musical genres are “Jing ping” and “Cadence”. Jing ping, which uses the accordion, is indigenous to the island. Dominica’s music is a mixture of Haitian, Afro-Cuban, African and European traditions. Popular artists over the years include Chubby and the Midnight Groovers, Bells Combo, the Gaylords, WCK and Triple Kay.

The 11th annual World Creole Music Festival was held in 2007 as part of the island’s celebrations of independence from Britain on 3 November. In January 2008, a year-long reunion celebration began to mark the 30th anniversary of independence.

Dominica is often seen as a society transitioning from collectivism to individualism. The economy is a developing one, which used to depend on agriculture. Signs of collectivism are evident in the small towns and villages scattered across the island.

The famous novelist Jean Rhys was born and raised on Dominica. The island is indirectly described in her most famous book, Wide Sargasso Sea. Rhys’ friend, the political activist and writer Phyllis Shand Allfrey, had her 1954 novel The Orchid House (ISBN 0-8135-2332-X) set in Dominica.

Much of the Walt Disney film Pirates of the Caribbean: Dead Man’s Chest (the second film in the series starring Johnny Depp, Keira Knightley and Orlando Bloom, released on 7 July 2006) was filmed on Dominica (although the island is referred to in the film as “Pelegosto”, a fictional island), as was part of the filming of the third film in the series, At World’s End (released on 2 May 2007).

Dominica’s cuisine is similar to that of other Caribbean islands, including St Lucia and Trinidad and Tobago. Like other Commonwealth islands in the Caribbean, Dominicans have developed a distinct flavour in their cuisine. Breakfast is an important daily meal that usually includes salt fish, dried and salted cod, and “bakes”, fried dough. Vendors on the streets of Dominica sell these snacks to passers-by, as well as fried chicken, fish and fruit and yoghurt smoothies. Other breakfast meals include cornmeal porridge, made with fine cornmeal or polenta, milk and condensed milk, and sugar for sweetening. Traditional British-style dishes such as eggs, bacon and toast are also popular, as are fried fish and plantains.

Common vegetables include plantains, tanias (a root vegetable), yams, potatoes, rice and peas. The most commonly eaten meats and poultry are chicken (very popular), beef and fish. They are often braised with onions, carrots, garlic, ginger and herbs such as thyme. The vegetables and meat are sautéed, creating a rich, dark sauce. The most popular dishes are rice and peas, stewed chicken, stewed beef, fried and steamed fish, and many types of broths and fish soups. The latter are filled with dumplings, carrots and ground stocks.

By air There are two airports in Dominica, Melville Hall (DOM) and Canefield (DCF). Most commercial flights land at Melville Hall. However, the airport cannot accommodate jet aircraft. Night landings have been permitted since early October 2010, but many airlines have not yet adjusted their routes to accommodate the additional...

Much of the accommodation on the island is outside the towns. CalibishieCove:. Luxurious suites with stunning views of the sea, red rock islands, coastline and beaches. The penthouse has a saline pool overlooking Treasure Island and a rooftop balcony overlooking the incredible east coast. All suites are stylish and each...

Snorkelling is particularly good at Champagne, south of Roseau, and at Scott's Head. Diving, water skiing, jet skiing, kayaking and other water sports are also available. Note that kayaking or canoeing offers an alternative to the sea and allows you to explore Dominica's rivers and inland waters. Whale and dolphin...

The best local handicrafts are the baskets made by the Caribs. The earthy colours are created by burying the fibres in the soil for varying lengths of time. American citizens (and probably others) should make sure that the materials they are made of allow them to be taken home. Dominica...

Dominica was the last of the Caribbean islands to be settled by Europeans, mainly because of the fierce resistance of the indigenous Caribs. France ceded possession in 1763 to Great Britain, which made the island a colony in 1805. In 1980, two years after independence, Dominica's situation improved when...

Stay Safe in Dominica Dominica is one of the safest places to travel in the region.There are no snakes or poisonous insects on Dominica. Take the usual safety precautions when travelling in Dominica. Although rare, petty crime tends to occur around Roseau. Elsewhere, the island is extremely safe. Stay Healthy in Dominica The...