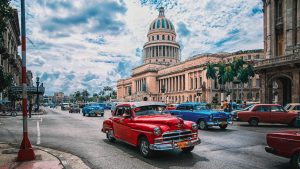 Cuba is generally a very safe country; strict and extensive policing, coupled with neighbourhood watch groups (known as the Committee for the Defence of the Revolution, or C.D.R.) generally keeps the streets free of violent crime.

Drug laws can be harsh and their enforcement unpredictable. The same applies to laws on prostitution. The importation, possession or production of pornographic material is strictly prohibited. It is not uncommon to see a dog jogging on the baggage carousel to sniff out incoming luggage, especially if it comes from countries prone to drug trafficking. Please ensure that you lock and/or pack your luggage to avoid any problems in this regard.

Tourists are generally advised not to get involved in the following three areas: Politics, drugs and pornography/prostitution. There is relatively little tolerance for public comments against the revolution, Fidel, Che, etc. It is advisable to refrain from such comments.

Women get a lot of attention from men, especially outside the more touristy centre of Havana. Avoid cleavage and short skirts to reduce attention, but not to prevent it. Don’t be irritated by whistles or hisses, as Cuban women often recognise and appreciate this attention. However, if they do it too enthusiastically, they are likely to encourage the men.

Cuba is a country of scams so widespread that they surprise even experienced travellers:

Cuba is considered very healthy, except for the water; even many Cubans boil their water. Nevertheless, some travellers drink untreated water without suffering. It is best to drink bottled water, and plenty of it, especially for visitors not used to temperatures above 30°C/85°F. Bottled water (agua de botella) is readily available and costs between 0.65 and 2 CUC for a 1.5-litre bottle, depending on the shop. It should be noted that the mineral content (total dissolved solids) of bottled water is quite high compared to other countries. So if you are planning a longer stay in Cuba (e.g. as a student or with a work permit), it may be worthwhile to bring a small jug or sports bottle with a water filter and some cartridges to further purify the water.

Cuban milk is usually not pasteurised and can make visitors sick. Also, tourists should be careful with vegetables that have been washed in tap water. Despite these warnings, most Cuban food is safe to eat and there is no reason to be paranoid.

The island is tropical and therefore hosts a number of diseases. Some recommend an aggressive vaccination schedule when planning a trip to Cuba, but most travellers arrive with little or no vaccination protection. Hepatitis B and tetanus vaccinations are recommended by most travel clinics. Hepatitis B is usually transmitted through direct blood contact or sexual contact. The vaccination course requires three injections over several weeks, followed by a blood test to determine if the treatment has been effective; shorter courses are available. (Interestingly, the hepatitis B vaccine is actually produced in Cuba for worldwide use). In general, immunisation against tetanus is more important because tetanus is a risk with any wound or cut, especially a dirty, contaminated wound.

The HIV/AIDS infection rate is less than 0.1 per cent. However, as always, you should exercise caution and ensure that you or your partner wear a condom if you engage in sexual activity while in Cuba.

Cuba has one of the highest per capita numbers of doctors in the world (about one doctor per 170 inhabitants), making doctors readily available in much of the island. Your hotel reception should be able to direct you to the nearest doctor (in fact, doctors are so numerous in Cuba that it is not uncommon to see doctors selling paintings, books or other works of art to tourists at the flea market to earn money to supplement their meagre salaries).

However, certain medicines are often difficult to find. It is highly recommended to stock up on over-the-counter medicines before travelling to Cuba, as pharmacies do not stock many medicines you would expect as a Westerner, such as aspirin, ibuprofen and Immodium. Do not try to import psychoactive drugs into Cuba. There is also a clinic (and emergency room) for foreigners in Havana that offers an extremely fast service.

Toiletries such as shampoo, conditioner, razors, tampons and condoms are also hard to find and expensive, so stock up before you travel.

The big cities – especially Havana – have very polluted air because of the old cars and factories. This can cause breathing problems for some visitors.

The emergency number in Cuba is 106.