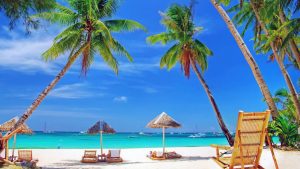 In the less developed outer islands (or family islands), basketry is made from palm leaves, among other things. This material, commonly known as “straw”, is woven into hats and bags, which are popular tourist items. Another use is for “voodoo dolls”, although these dolls are a product of the American imagination and not based on historical fact.

A form of folk magic (Obeah) is practised by some Bahamians, mainly in the Family Islands (outer islands) of the Bahamas. The practice of Obeah is illegal in the Bahamas and is subject to criminal prosecution.

Junkanoo is a traditional Afro-British street parade with “rush”, music, dance and art that takes place every year on Boxing Day and New Year’s Day in Nassau (and some other places). Junkanoo also celebrates other festivals and events such as Emancipation Day.

Regattas are important social events in many family settlements on the island. They usually involve one or more days of sailing on historic working ships and a feast ashore.

Many dishes are associated with Bahamian cuisine, which reflects Caribbean, African and European influences. Some places have festivals associated with the culture or traditional food of the region, such as the Pineapple Fest in Gregory Town, Eleuthera or the Crab Fest in Andros. Other important traditions are storytelling.

By plane The largest airports in the Bahamas are in the capital Nassau on New Providence and Freeport on Grand Bahama. Smaller airports are scattered throughout the other islands. The Bahamas has six international airports, the largest being Lynden Pindling International Airport, which is located west of Nassau. With the boat The...

By plane Bahamasair offers a comprehensive network that radiates out from Nassau and covers most population centres. However, fares are high, frequencies are low, aircraft are small and the airline is known for long delays. Many travellers in a hurry prefer charter flights. By bus Nassau/New Providence have a bus system called...

Islands New Providence (Nassau, Paradise Island)Dominated by the capital Nassau and connected to the small island of Paradise, home to the gigantic Atlantis casino complex.Grand BahamaAn ecological playground consisting of a system of underwater limestone caves. The Ecotourism Centre, which offers nature discovery tours, national parks and botanical gardens.BiminiAbacos and...

Accommodation in the Bahamas is expensive and there is virtually no hostel-style accommodation. The cheapest hotels start at around US$70 and most hotels cost US$200-300/night, with the best resorts easily exceeding US$500. However, deals can be had in the summer low season. Please note that the Bahamas charges a "Service...

Food in Bahamas As you would expect from an island nation, seafood is very popular. The national dish is conch (pronounced "conk" with a hard K), a type of mollusc served fried ("cracked") or raw with a lemon zest, and as elsewhere in the Caribbean, the classic side dish is...

Festivals The biggest event in the Bahamian calendar is Junkanoo, a street carnival that takes place on Boxing Day (26 December) and New Year's Day (1 January). Junkanoo bands parade through the streets of the cities, especially in Nassau, wearing spectacular but disposable crepe paper costumes and playing the characteristic...

The Taino people settled in the uninhabited south of the Bahamas from Hispaniola and Cuba around the 11th century after migrating there from South America. They became the Lucayan people. It is estimated that 30,000 Lucayans were living in the Bahamas at the time of Columbus' arrival in 1492. Christopher...

Stay safe By the middle of the year 2007, the country had already recorded 42 murders. The murder count for 2010 was 96. Police statistics will show that most murders are linked to domestic violence or gang related disputes, mostly fueled by competition in the illegal drug trade. In 2011...