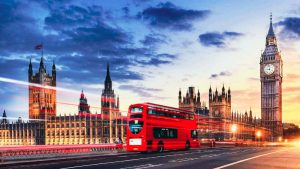 The United Kingdom of Great Britain and Northern Ireland is a union composed of the following original nations and territories:

Dependencies on the Crown

The UK also undertakes the diplomatic representation and defence of a number of overseas territories, including Gibraltar, Anguilla, Bermuda, the British Virgin Islands, the Cayman Islands, the Falkland Islands, Montserrat, St Helena, Ascension Island, Tristan da Cunha, the Pitcairn Islands and the Turks and Caicos Islands. As most of these islands have their own immigration rules and the climate and travel options are very different from those in the UK, they are covered in separate articles.

Many places and towns in the UK are of interest to travellers. Below you will find a selection of nine of them, the others are arranged by region:

Other destinations in United Kingdom

By plane There are direct international flights to many cities other than just the airports whose name includes "London". Recently, many airports in the south of England have added "London" to their names. Be aware that just because an airport has "London" in its name, this does not mean that...

Plan your trip With public transport Traveline, +44 871 2002-233 (calls cost £0.12/min from the UK). Traveline provides an online travel planning service for all public transport in the UK, excluding air travel. They also have separate planners for specific regions. You can also download their free apps for iPhone and...

England is connected to France by the Channel Tunnel. Northern Ireland shares a land border with the Republic of Ireland. UK, does not fully implement the Schengen Agreement, which means that travel to and from other EU countries (except Ireland) requires systematic checks of passports/ID cards at the border and...

The UK has a mild, humid temperate climate, tempered by the North Atlantic Current and the proximity of the sea. The hot, humid summers and mild winters offer temperatures pleasant enough to enjoy outdoor activities all year round. However, the weather in the UK can be changeable and conditions...

The UK offers a wide range of hotels, rated on a star scale from 5-star luxury (and beyond!) to basic 1-star. There are also a large number of private B&Bs (short for "B&B") offering rooms with usually a fried "full English breakfast". You can also rent a private house...

From Land's End in the south to John O'Groats in the north, there is so much to see in the UK. There are hundreds of free museums across the country, thousands of urban parks to browse, tens of thousands of interesting communities to visit and millions of acres of...

Although most visitors will visit London at some point, it's worth getting out of the capital to get a real insight into the country and it's important not to forget the diversity that can be found within a radius of just 50 miles. Whether you are looking for the countryside,...

Food in United Kingdom Despite its unjustly negative reputation, British food is in fact very good and has improved greatly in recent decades, and many Britons are proud of their national dishes. Mid-range and upmarket restaurants and supermarkets are still of a high standard and the choice of international dishes...

Money The currency used throughout the United Kingdom is the pound (£) (more correctly called sterling to distinguish it from the Syrian or Egyptian pound, but it is not used in common parlance), divided into 100 pence (singular penny) (p). The coins appear in 1p (small copper), 2p (large copper), 5p...

Public holidays Every country (and sometimes some cities, like Glasgow and Edinburgh) in the UK has a number of (slightly different) public holidays when the majority of people are not working. Shops, pubs, restaurants and the like are usually open. Many UK residents use these holidays to travel, both within...

In most social situations it is acceptable to address a person by their first name. First names are sometimes avoided among strangers in order not to appear too familiar. In very formal or professional situations, first names are usually not used until people get to know each other better....

Phone In an emergency, dial 999 or 112 from any phone. These calls are free of charge and are answered by an emergency service worker who will ask you what service(s) you need (police, fire, ambulance, coastguard or mountain rescue) and where you are. You can also call 999 or 112 from...

English English is spoken throughout the UK, although there are parts of major cities where a variety of languages are also spoken due to immigration. English spoken in the UK has many accents and dialects, some of which may include words unknown to other English speakers. It is quite common...

The culture of the United Kingdom has been influenced by many factors, including: the country's insularity, its history as a Western liberal democracy and great power, and the fact that it is a political union of four countries, each of which has retained different elements of tradition, custom and...

Britain, the largest island of the British Isles, has been inhabited since at least the last Ice Age, more than 10,000 years ago. Ireland is thought to have been settled by modern humans around the same time, or perhaps a little later. Although little is known about the inhabitants...

Stay safe in United Kingdom In general, the UK is a safe country to travel to; you won't make many mistakes if you follow the general advice and tips for Europe. In an emergency, call 999 or 112 (free from any phone, including mobile phones) and ask for an ambulance, fire...