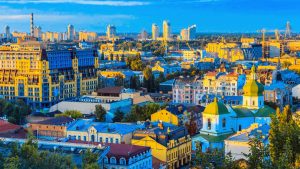 The hryvnia is the monetary unit (UAH). In Ukrainian, it is spelled pивн and pronounced hryvnia, whereas in Russian, it is spelled grivna. To add to the confusion, Russian speakers in the east often refer to it as ruble, and it is occasionally displayed as “” both before and after the amount, as well as with and without spaces. Actual rates at the National Bank.

Every fairly large town will have exchange booths and banks that will convert euro, USD, or Russian rubles to UAH; just check for exchange rate indications. British pounds are also often exchangeable, although at low interchange rates. A considerably broader variety of currencies may be exchanged in tourist destinations. Shop around since quoted prices often differ.

Booths and banks will not usually attempt to defraud you, but you should count your notes to be sure. Bank employees in several locations will reject money with even small blemishes or grease stains. A rip in the paper that is longer than five mm may be considered excessive.

ATMs (банкомат, bankomat) are widely available across the country and usually accept foreign credit cards. They almost usually provide UAH, but some may offer USD. Foreign cards are usually not subject to fees. (Unless you’re withdrawing cash).

ATMs accept debit cards such as the maestro. Cirrus/Maestro/Plus bank cards may be the most efficient method to get cash in Ukraine. Not all ATMs advertise that they support the Plus system, but if they accept Visa, they usually do. PrivatBank ATMs show that they accept Plus cards, however they do not accept North American cards.

Changing money in banks takes time and involves a lot of paperwork. Bank employees may be reluctant to go through all of the processes only to change a USD100 note and may attempt to deceive you with an explanation such as “sorry, we don’t have the money.” If you really must exchange money there, you may be able to convince them to alter their views; but, if you can go someplace else, you will most likely save time. You will also be required to present your passport at a bank. Banks may also restrict you from purchasing “hard” money in exchange for UAH.

Even at bigger branches, you should not expect English-speaking personnel. Anything else than money exchange may need the use of a translator or, at the very least, a great deal of patience.

Most banks will lend you money if you have a cash advance from a Visa or MasterCard. In addition to whatever your bank charges, there is a modest service fee of 3% to accomplish this.

While they may seem unsavoury, exchange booths are usually the finest locations to change money. Their rates are often lower than those of banks (although not always), and you will not be required to provide your passport. Service is prompt, and there is seldom any paperwork or invoices.

It is unlawful to remove objects of historical significance from the nation. These include items such as badges, medals, icons, historical artworks, and so on. While a luggage search is unlikely, don’t wear any old badges or flaunt anything that might raise suspicion.