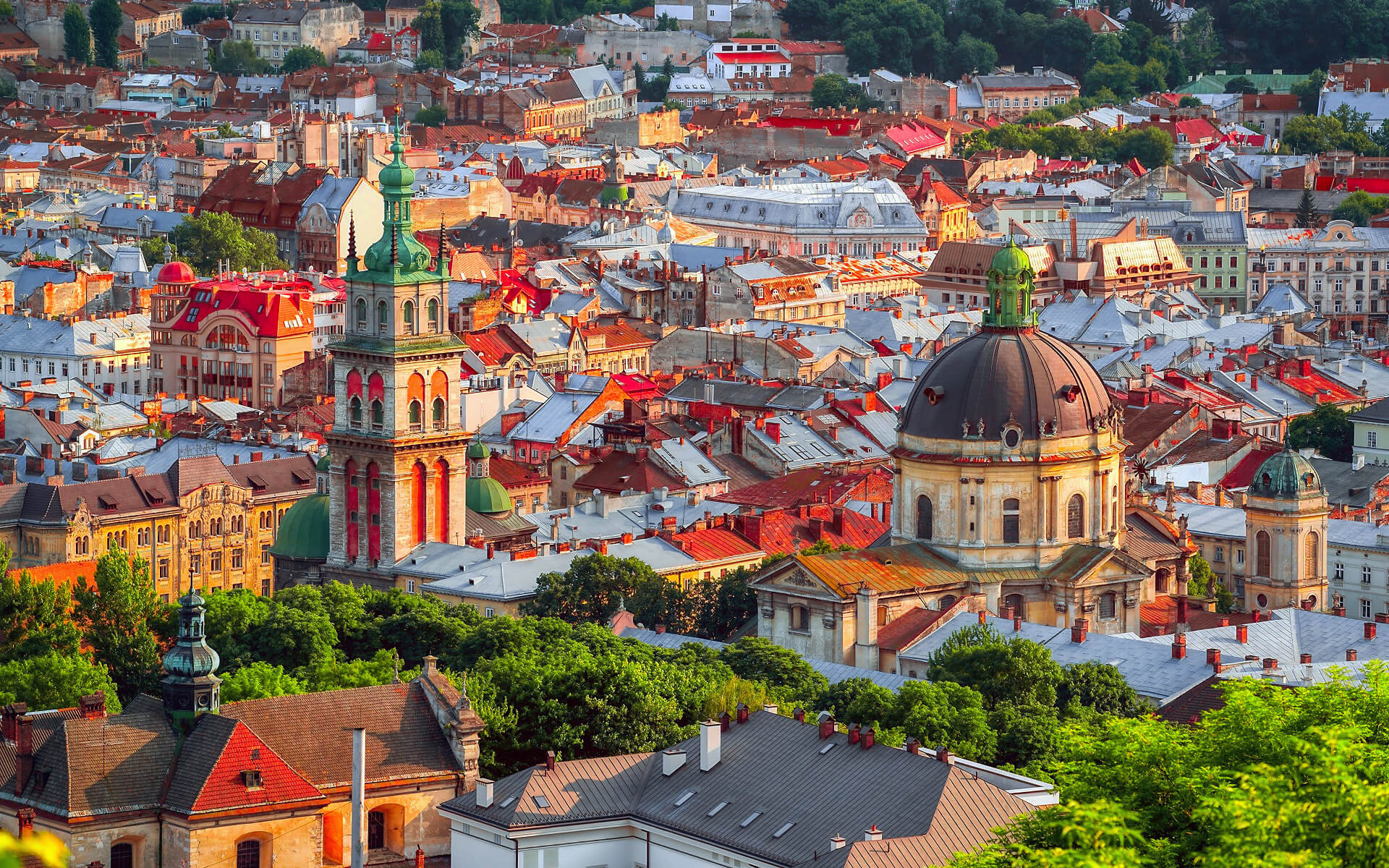 Lviv, the biggest city in western Ukraine and the seventh largest city in Ukraine overall, is one of the country’s major cultural centers. Named after the oldest son of Rus’ King Daniel of Galicia, Leo. From 1272 until 1349, it was the capital of the Kingdom of Galicia–Volhynia (also known as the Kingdom of Rus’), until it was taken by King Casimir III the Great, who became known as the King of Poland and Rus’. It was the regional capital of the Ruthenian Voivodeship in the Kingdom of Poland from 1434 until 1772, when it was renamed Lemberg as the capital of the Habsburg Kingdom of Galicia and Lodomeria. In 1918, it became the capital of the West Ukrainian People’s Republic in a short period of time. Between the wars, the city was known as Lwów, and it served as the administrative center of the Lwów Voivodeship during the Second Polish Republic. Following WWII, it became a constituent republic of the Soviet Union (Ukrainian SSR) then, in 1991, of independent Ukraine. Lviv is the administrative seat of Lviv Oblast and is designated as a city of oblast importance. Its population is 728,350 people.

Lviv served as the historical capital of Galicia. The city’s historical core, with its ancient buildings and cobblestone streets, escaped the Soviet and German occupations of the Second World War almost undamaged. The city is home to several enterprises and educational institutions, including Lviv University and Lviv Polytechnic. Lviv also has several world-class cultural organizations, including as a philharmonic orchestra and the renowned Lviv Theatre of Opera and Ballet. The historic city center is included as a UNESCO World Heritage Site. In September 2006, Lviv commemorated its 750th anniversary with a son et lumière event in the city center.

Lviv (also spelt L’viv and вiв; Polish: Lwów, German: Lemberg, Russian: Lvov, Latin: Leopolis) is a city in Western Ukraine that was once the capital of East Galicia. It is the region’s largest city and a key Ukrainian cultural center on the UNESCO World Heritage List.

Lviv is one of Ukraine’s most prominent cultural centers. The city is well-known for its arts, literature, music, and theater. Nowadays, the unmistakable evidences of the city’s cultural richness are a large number of theatres, music halls, creative unions, and a large number of artistic events (more than 100 festivals annually, 60 museums, 10 theatres).

Lviv is regarded one of Ukraine’s key tourist attractions due to its extensive cultural program, improved infrastructure (today Lviv has over 8 000 hotel rooms, over 700 cafés and restaurants, free WI-Fi zones in the city center, and strong connectivity with many countries across the globe). In the early 2010s, the city had a 40% surge in visitors, the highest pace in Europe.

The city has a cosmopolitan heritage, although little of it has remained to the present day. King Daniel of Galicia (Ukrainian: орол анило алики – Korol’ Danylo Galyckyy) created it in 1256, and it came under Polish power in the 14th century. For centuries, Poles, Jews, Ukrainians, Germans, and others coexisted. This multicultural experience came to a close during and after WWII. The Germans, with the help of Ukrainian nationalists, murdered the majority of the Jews (roughly one-third of Lviv’s population at the time), and at the end and in the immediate aftermath of the war, the Polish population (roughly half of the population) was first partly driven out by nationalist terror, then “repatriated” to Poland in its new borders by the Soviet government. The Polish and Jewish legacy is little maintained, however few inscriptions on previous stores in Polish, Yiddish, and German may be found.

Because of Lviv’s closeness to Europe and friendliness to outsiders, the city’s cosmopolitan atmosphere has recently witnessed a renaissance. Walking around the city center nowadays, one may hear Poles laughing and photographing the gorgeous ancient buildings, Germans on guided tours, Ukrainian or Russian visitors and students joking about this or that, and American or British businesspeople speaking in cafés. In the city, there is even a tiny Jewish community. Lviv’s many colleges attract students from every continent, and its historic architecture attracts visitors from all over the world, including Ukraine.

In the 17th century, the Polish monarch John II Casimir created Lviv University, and Lviv (known as Lwów) was one of the most significant towns in the Polish-Lithuanian Commonwealth, alongside Kraków, Warsaw, Gdansk, and Vilnius.

The city was captured by the Habsburgs in 1772, and under Austrian rule it was known as Lemberg, the capital of Galicia. It was restored to Poland upon the breakup of the Austro-Hungarian Empire in 1918.

As a consequence of WWII, Stalin shifted the Soviet border westward, and Lviv became a part of the USSR under the name Lvov (still widely used, even locally). When Ukraine gained independence in 1991, the city’s name was formally changed to Lviv (вв).

Lviv is situated in Ukraine’s most Ukrainian area. When it was a Soviet province, the majority of signs were solely in Ukrainian, with just a handful in Russian. Lviv has a Central European flare in its architecture as a result of its Polish and Austro-Hungarian heritage, making it one of the most attractive towns in Eastern Europe. Lviv has even been dubbed “the cultural center of Ukraine.” The folks there are quite kind, though a little direct (which is very common in eastern Slavic cultures).

The city has been more tourist-friendly since just before the Euro 2012 soccer competition. All downtown street signs are now in both Ukrainian and English, and the Information Center on Rynok Square workers speak a variety of languages. Maps, event schedules, and visitor guides are available for free in English, German, Polish, and Russian. There are also little information kiosks alongside several monuments (small touch-screen TVs with maps and city information). Visiting Lviv is incredibly beneficial for the first-time visitor since it is relatively affordable to live here and the city has a really authentic vibe, unlike locations like Kraków or Prague, which are overrun with tourists.

Lviv has a humid continental climate (Köppen climatic classification Dfb), with chilly winters and warm summers. In January, the average temperature is 3.1 °C (26 °F) and in July, it is 18.3 °C (65 °F). The average annual rainfall is 745 mm (29 in), with summer being the wettest season. Lviv gets roughly 1,804 hours of sunlight each year.

Lviv is situated on the outskirts of the Roztochia Upland, around 70 kilometers (43 miles) from the Polish border and 160 kilometers (99 miles) from the Carpathian Mountains in the east. Lviv has an average elevation of 296 meters (971 feet) above sea level. Its highest point is 409 meters (1342 feet) above sea level, at Vysokyi Zamok (High Castle). With its characteristic green-domed churches and exquisite architecture, this fortress has a commanding view of the old city center.

The historic walled city was located on the banks of the River Poltva, in the foothills of the High Castle. The river was utilized to convey products in the 13th century. The Poltva was built over in the early twentieth century in parts where it runs through the city; the river flows right under Lviv’s primary roadway, Freedom Avenue (Prospect Svobody), and the Lviv Theatre of Opera and Ballet.

Lviv is one of Ukraine’s major cities and is quickly expanding. According to the Ukrainian Ministry of Economy, the monthly average pay in Lviv is somewhat lower than the national average, which was 2765 UAH ($345) in February 2013.

Lviv is classified as a middle-income city by the World Bank.

Lviv is home to 219 big industrial organizations and about 9,000 minor businesses.

«Electrontrans» is a full-scale manufacturing firm specialized in the design and manufacture of contemporary urban electric transport – trams, trolleybuses, electric buses, units, and spare parts. Elektrotrans JV begins building low-floor trams in 2013, being the first Ukrainian company to do so.

Lviv is also one of the leaders in software export in Eastern Europe, with a 20 percent increase projected in the industry. Over a quarter of all IT experts in Ukraine work here, and 1500 IT graduates are graduated each year. There are hundreds of local IT firms (Eleks, DevCom, SoftServe, Epam, Lohika, Mita-Teknik, Global Logic, ISD, N-IX and others). Global Services, regarded in the outsourcing sector as a source of up-to-date news and research on IT and business services, issued an article in December 2011 naming Lviv as one of the most promising locations for outsourcing.

There are several restaurants and stores, as well as street sellers selling food, literature, clothing, traditional cultural artifacts, and tourist souvenirs. Banking and money trade are key parts of the Lviv economy, with several banks and exchange offices located around the city.

Lviv Airlines’ headquarters are located on the grounds of Lviv Airport.

The Lviv area code is +380 32. (2). The telephone system was recently updated; hence, while dialing 6-digit numbers, use the city prefix 322, but merely 32 when dialing 7-digit numbers.

All calls to and from mobile phones are considered long distance. Because the telephone system was recently updated, you must no longer dial an 8 followed by the city/mobile prefix, followed by the phone number. Some common mobile prefixes are 050, 067, 066, 096, and 097. Kyivstar, MTS, and Life are the leading mobile operators. Many establishments across Lviv sell SIM cards and balance replenishment cards.

There are several Internet cafés. Chorna Medeia on Kryva Lypa is centrally placed.