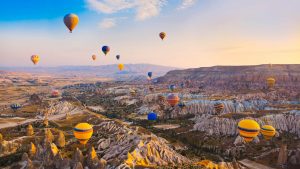 The climate in Turkey is very diverse, depending on the different topography and latitude.

The coastal areas of the Aegean and Mediterranean enjoy the typical Mediterranean climate. During the sunny and hot summer (May to October) there is hardly a drop of rain. The winters in these regions are mild and rainy, and it snows very rarely in the coastal areas, with the exception of the mountain regions, which are higher than 2000 meters, which are very snowy and often inaccessible. The water temperature in the Aegean and Mediterranean Sea is warm during the long summer season (May to October), which is the bathing season, and fluctuates between 23 ° and 28 ° C.

The region around the Sea of ​​Marmara, including Istanbul, has a transitional climate between an oceanic and a semi-Mediterranean climate, but it rains, though not much, during the very warm summer (as showers that usually last 15-30 minutes) . Winters are colder than on the west and south coasts. Snow is common on the coast, but does not stay long and is limited to a few days in winter. The water temperature in the Marmara Sea is also colder than in the Aegean and the Mediterranean Sea, although the water temperature in summer (June, July and August) only reaches between 20 ° and 24 ° C and the bathing season is limited to these summer months.

The Black Sea region, with its oceanic climate , has the highest rainfall and is the only region in Turkey with year-round precipitation. The eastern part of this coast has the highest rainfall in the country with an average of 2,500 mm per year. In summer it is warm and humid, while in winter it is cool and humid. Snow is common in coastal areas, although it does not stay on the ground for long and is limited to a few days in winter. As expected, the snow in the mountains is very high and often not passable, in the highest areas there are glaciers all year round. The water temperature along the entire Turkish Black Sea coast is always cool and fluctuates between 10 ° and 20 ° C all year round and is even less suitable for bathing in summer than in the Marmara Sea.

Most of the coastal areas have high relative humidity for most of the year, which makes hot weather feel hotter and cold weather colder than it actually is.

In inland areas such as Ankara, summers are generally hot (although nights are cooler and you won’t be comfortable outdoors wearing just a light T-shirt) and winters can be cold and snowy. The further east the town is, the colder the winters and the heavier the snow. The north-east (around Erzurum and Kars) is the only inland region with cool and rainy summers.

The southeastern region near the Syrian border has a desert-like climate, the temperature in summer is often over 40 ° C and it does not rain. There is occasional snowfall in winter.