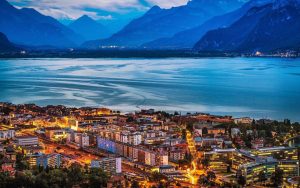 Switzerland is unsurprisingly one of the safest countries in Europe, but any place that attracts Rolex-wearing bankers and throngs of distracted tourists is bound to produce a few pickpockets too. Clearly, you need to keep an eye on your business, especially amid the summer crowds. In general, you are safe anywhere, anytime. If you feel threatened for any reason, seek out a nearby restaurant or phone box. In Switzerland, the emergency number is 112 and operators are usually English-speaking.

Many Swiss institutions print your full credit card number on the receipt, which raises concerns about identity theft when making credit card purchases in Switzerland. For this reason, visitors using a credit card should carefully check the information printed on all receipts before throwing them away. This is done, for example, in some book and clothing shops and even at the ubiquitous kiosk. This list is not exhaustive, of course, so visitors should be careful when using a credit card.

Women travelling alone should not have any problems. Young Swiss people tend to be very open and show affection in public – sometimes too much so, and some women may find people too friendly, especially in the early hours of the morning in clubs and bars. Usually the international language of waving people off or simply walking around is enough.

The Swiss police take a relatively discreet stance; they prefer to stay behind the scenes as they consider their presence a threat to the environment. Unlike some countries where the police are more present, they rarely approach civilians to ask if they need help or simply mark their presence by patrolling. However, the police do take traffic violations seriously. For example, crossing a level crossing or a red pedestrian light is punished with a fine on the spot. The advantage of strict traffic rules is that drivers are generally very disciplined and stop for pedestrians at level crossings without any problems. Football matches are the only notable exception to the above rule. Because of the potential danger of violence from hooligans, a large contingent of police is usually deployed at these matches (especially in Basel or Zurich), equipped with rubber bullets and tear gas in case of major riots.

Switzerland has very strict Good Samaritan laws that make it a civic duty to help someone in need without putting yourself at undue risk. People are therefore very willing to help if you seem to be in an emergency situation. However, be aware that the same applies to you if you witness someone in danger. Refusal to render assistance to a person in distress may be punishable under criminal law as “refusal to render assistance”. The general American caveat of not getting involved with foreigners because of possible future civil liability does not apply in Switzerland, as it would be virtually impossible to take civil action against anyone who provides assistance.

The minimum age for consumption of beer, wine and alcoholic cider is 16, except in Ticino where it is 18, while the minimum age for any other alcohol (e.g. spirits, “alcopops”, etc.) is 18. The consumption of alcohol in public is legal in Switzerland. So don’t worry if you see a group of teenagers drinking a six-pack in public places or on public transport; this is nothing unusual and should not be interpreted as a threat.

Switzerland is not a country of pointless civil lawsuits and claims for damages. So if you see a sign or warning telling you not to do something, comply! Example: In many alpine regions, charming little mountain streams may be flanked by signs saying “no swimming”. To the uninitiated, this may seem a bit exaggerated, but these signs are actually a consequence of the presence of hydroelectric power plants further upstream, which can release large amounts of water without warning.

In general, there are no problems with food and water in Switzerland. Restaurants are controlled according to strict rules. Water is drinkable everywhere, including at any tap, especially in public fountains, unless it is labelled “Non-potable”, “Non-potable” or “Non potabile”. Do not drink from the makeshift water trough installed in a meadow to water livestock supplied by the nearby stream.

Many organic foods are available in virtually every grocery shop with the label “organic”, and it is currently illegal to import and sell genetically modified foods.

Switzerland has a dense network of hospitals and clinics, and public hospitals will admit you in an emergency. There are also ‘permanent’ clinics open 24 hours a day at major stations, including Zurich, Basel and Lucerne, which can treat non-urgent illnesses without an appointment. Be aware that treatment costs can add up quickly, so you will need to take out travel insurance with a good level of cover if you cannot pay these costs out of pocket.