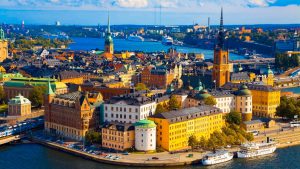 EuropeSwedenThings To See in Sweden

Sweden, despite its contemporary culture, is a nation rich of apparently unspoiled environment and ever-present history. Many tourists’ first destination is ancient and small Stockholm, which is rich in history, home to the Vasa Museum, and the entrance to the Stockholm Archipelago. Gothenburg’s canals and cobblestoned streets, with its renowned botanical park, or Malmö’s contemporary architecture, are also worth a visit. For additional history, visit Visby, a Unesco World Heritage Site, or Ystad, a medieval town made famous by the Kurt Wallander books set here, as well as Ales stenar, one of the country’s oldest iron-age grave mounds.

However, you haven’t visited Sweden until you’ve experienced its nature side. Its diverse natural environments provide a plethora of magnificent views and attractions, ranging from thick woods to crystal clear lakes, waterfalls, and rolling mountains. Sarek National Park, dubbed “Europe’s last wilderness” by some, is a difficult yet extremely rewarding place to explore. It was the first of 29 created national parks and is part of the large and Unesco protected terrains of Laponia, together with the national parks Padjelanta, Stora Sjöfallet (with its snowy peaks), and Muddus National Park’s taiga and ravines. Visit in the summer to view elk, wolverines, and other Swedish wildlife, or in the winter to experience the beautiful Northern Lights. Kosterhavet Maritime Park is the place to go if you want to go on a lobster or seal safari.

Sweden has the most palaces (slott), castles, and manors of any Nordic country. Eleven of them are owned by the Royal Family and are accessible to the public to some degree. Greater Stockholm includes Stockholm Palace (Stockholm/Gamla Stan), Rosendal (Stockholm/Djurgrden), Haga, Gustav III’s pavilion, and Ulriksdal (Solna), Drottningholm and Kina (Ekerö), Tullgarn (Södertälje), and Rosersberg (Sigtuna). Gripsholm (Mariefred) and Strömsholm (Hallstahammar) are farther distant. The agricultural regions are densely packed with aristocratic and bourgeois manors dating from the 17th century and later, many of which are now utilized as hotels.

While the Bergslagen district, Roslagen, and other parts of Sweden became world leaders in mining and metalworking during the 17th century, Sweden did not fully industrialize until the 20th century, when Swedish product brands such as Volvo, Ericsson, SAAB, SKF, AGA, IKEA, Tetra Pak, and Atlas Copco conquered the world. During the past several decades, the majority of the Swedish labor has shifted to high technology and the service sector, resulting in the conversion of numerous mines, factories, and canals into museums. Among the industrial historical sites are Göta Kanal, which runs from the Baltic Sea to the Atlantic Ocean, the Falun copper mine, and the Nobel Museum in Stockholm.