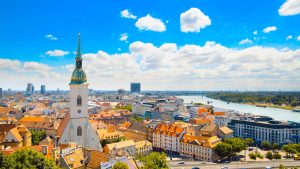 Western Slovakia
The capital, Bratislava, and its near environs are the center of tourism in this region. The southern region is a vast plain along the Danube River, and it is the most productive part of the nation. The north is made up of wide valleys formed by the rivers Vah and Nitra, divided by forested mountains crowned with castles such as Nitra, Trennor Bojnice.

Central Slovakia
A area located in the center of the Carpathians. There are many winter sports areas here, including the largest in Jasná. There are also many national parks, such as the Low Tatras, Great Fatra, and Little Fatra. The major cities are Banská Bystrica and Žilina, although there are also many mining towns, including as UNESCO-listed Banská Štiavnica.

Eastern Slovakia
The area of the High Tatras mountains, the summit of the Carpathians, and Slovak Paradise, a ravine hiking paradise. It contains the UNESCO-listed towns of Levoča and Bardejov, as well as the bulk of the country’s wooden churches. The major city include Košice, which is followed by Prešov.

Other destinations in Slovakia