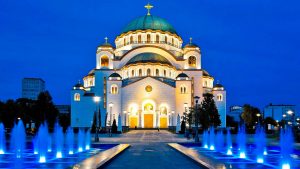 Money may be exchanged in official exchange offices, known locally as menjačnica, which often display the National Bank of Serbia symbol outside the building. Rates are often lower than those offered by banks. Converting Euros or other major currencies is considerably simpler. There are many ATMs that take international bank and credit cards without issue. Visa, Visa Electron, Mastercard, and Maestro are all commonly accepted payment methods. American Express and Diners Club cards, on the other hand, are seldom accepted. Similarly, traveler’s checks are not often accepted in Serbia, and cashing them may be difficult.

Outside of Serbia, the dinar is not readily convertible; it is recommended that you re-convert any leftover dinars to Euros or other major currencies before leaving the country.

Old Yugoslavian money may be bought from street vendors. A RSD500,000,000,000 note is a unique memento. A collection of ten banknotes from the hyperinflation period may be purchased for RSD500 in Kalemegdan, near Belgrade’s castle.

Since service costs are always included in the bill, tips are never considered a formal requirement; nevertheless, rounding up or leaving a tip (10-15 percent) is customary in restaurants (but not in fast-food restaurants) if the client is pleased with the service. In pubs and taxicabs, tips are also accepted (usually by rounding up the amount paid – e.g. if the taximeter displays 592 RSD, give 600).

Prescription medicines are available without a prescription in almost all Serbian pharmacies (apoteka).

Prices are generally comparable to the rest of the Balkans. However, import tariffs make clothing and shoes extremely costly in Serbia.