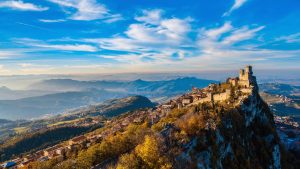 Saint Marinus and his longtime companion Leo fled the island of Arba in present-day Croatia to work as stonemasons in Rimini. Following the Diocletianic Persecution for his Christian preaching, he fled to the neighboring Monte Titano, where he established what is today the city and state of San Marino. The Republic was founded on September 3, 301, according to official records.

The Papacy acknowledged its independence in 1631.

The approach of Napoleon’s army in 1797 posed a short danger to San Marino’s freedom, but the nation was spared from losing its liberty due to one of its Regents, Antonio Onofri, who managed to earn Napoleon’s esteem and affection. Napoleon, thanks to his involvement, pledged to guarantee and preserve the Republic’s independence in a letter sent to Gaspard Monge, scientist and commissary of the French Government for Science and Art, even promising to expand its area according to its requirements. The Regents turned down the offer, fearing potential retribution from neighboring states’ revanchism.

During the latter stages of the Italian unification movement in the nineteenth century, San Marino provided as a haven for many individuals who had been punished for their support for unity. In appreciation of this support, Giuseppe Garibaldi agreed to San Marino’s request that it not be included into the new Italian state.

The government of San Marino designated Abraham Lincoln as an honorary citizen. In response, he said that the republic demonstrated that “government based on republican ideas is capable of being managed in such a way that it is safe and lasting.”

When Italy declared war on Austria-Hungary on May 23, 1915, San Marino remained neutral, and Italy took a negative view of Sammarinese neutrality, fearing that San Marino might house Austrian spies who could get access to its new radiotelegraph station. Italy attempted to impose a Carabinieri detachment in the republic and then severed the republic’s telephone connections when it refused to cooperate. Two groups of 10 volunteers fought alongside Italian troops on the Italian front, the first as fighters and the second as a medical corps running a Red Cross field hospital. Due to the presence of this hospital, Austria-Hungary eventually suspended diplomatic ties with San Marino.

Three days after Benito Mussolini’s assassination in Italy, the PFS regime fell, and the new administration proclaimed neutrality in the war. The Fascists reclaimed control on April 1, 1944, but maintained neutrality. Despite this, on June 26, 1944, the Royal Air Force attacked San Marino, believing that it had been captured by German troops and was being used to stockpile supplies and munitions. On the same day, the Sammarinese administration announced that no military facilities or equipment were situated on its territory, and that no belligerent troops were permitted to enter. When Allied troops crossed the Gothic Line, San Marino welcomed hundreds of civilian evacuees. It was temporarily captured by German troops in September 1944, but they were destroyed by Allied forces in the Battle of San Marino.

Between 1945 to 1957, San Marino hosted the world’s first democratically elected communist administration, a combination of the Sammarinese Communist Party and the Sammarinese Socialist Party.

San Marino is the world’s smallest republic, although when Nauru achieved independence in 1968, it disputed that claim, owing to Nauru’s tiny geographical mass of just 21 km2 (8.1 sq mi). However, Nauru’s authority over its surrounding seas extends over 431,000 km2 (166,000 sq mi), an area thousands of times larger than San Marino’s territory.

San Marino joined the Council of Europe in 1988 and the United Nations in 1992. It is neither a member of the European Union or the Eurozone, despite the fact that it utilizes the euro as its currency.

The euro is used in San Marino. It is one of many European nations that utilize the Euro. All euro banknotes and coins are legal tender across the EU. One euro is made up of 100 cents. The euro's official sign is €, and its ISO code is EUR. The cent...

The Three Towers of San Marino are situated in the city on the three summits of Monte Titano. They appear on both the San Marino flag and the coat of arms. The three towers are: Guaita, the oldest (built in the 11th century); Cesta, built in the thirteenth century...