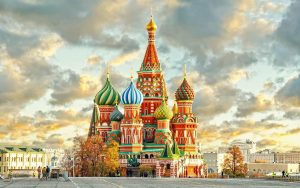 Russian is the main language in Russia. This language belongs to the East Slavic language family and is closely related to Ukrainian and Belarusian. Other Slavic languages such as Bulgarian, Croatian and Czech are not mutually intelligible, but still bear a slight resemblance. Russian is considered one of the most difficult languages for an English speaker to learn, mainly because of its very complicated grammar. You won’t learn the language in a short time; focus on learning a few key “pleasantries” and the Cyrillic alphabet (e.g. “ресторан” is spelled “restoran” in the Latin alphabet, meaning “restaurant”) so that you have a chance of recognising street names, labels and public signs. Familiarising yourself with the Cyrillic script is extremely useful and not very difficult, not only for Russia but also for a number of other countries.

Learning Russian is quite difficult. The script, Cyrillic, uses many letters of the Latin alphabet but gives them different sounds. The language uses three grammatical genders (masculine, feminine and neutral), six grammatical cases and falling stress, which makes it difficult for native English speakers to gain perspective.

English is becoming more and more of a requirement in the business world, and many Russians in the cities (especially in Moscow or St Petersburg, but also elsewhere) know enough English to communicate. Elsewhere, English is generally non-existent, so take a phrasebook with you and be prepared for slow communication with lots of interpretive gestures.

Russia has hundreds of languages and claims to support most of them. Soviet linguists documented them in the first decades of the USSR and made sure they had Cyrillic writing systems (except Karelian, Veps, Ingrian, Votic and Ter Sami). Some have become co-official local languages. Southern Russia is bordered by Turkic, Mongolian and Tungusic languages, the north by Finnish and Samoyedic languages. In the south-western corner there are a variety of Caucasian languages, and in the north-east some Chukotko-Kamchatk languages. However, a small amount of Russian is very useful for travellers wherever they are.

The Russian Orthodox religion is one of the oldest branches of Christianity in the world and continues to have a very large number of adherents, although it was suppressed during the communist period. The language spoken in Russian Orthodox services is Old Church Slavonic, which differs significantly from modern Russian.

By train Due to the vastness of the country and poor road safety, the best way to move around the country quickly is by train. Russia has an extensive railway network connecting almost all cities and towns. For intercity travel, the train is usually the most comfortable solution for journeys...

Russia is huge, and the attractions for visitors are exceptionally long, although many of them are in hard-to-reach areas of the most remote countries on earth. The most famous sights are in and around the country's capitals, Moscow and St Petersburg. Historical attractions Russia's history is the first reason tourists come...

Food in Russia The foundations of Russian cuisine were laid by the peasant diet in an often harsh climate, with a combination of fish, poultry, game, mushrooms, berries and honey. The cultivation of rye, wheat, buckwheat, barley and millet provided the ingredients for an abundance of breads, pancakes, muesli, kvass,...

Money in Russia Throughout its history, Russia has had different versions of the rouble (рубль), which is divided into 100 kopecks (копеек). The latest manifestation, the rouble (replacing the rouble), was introduced in 1998 (although all banknotes and the first coin issues bear the date 1997). All currencies before 1998...

Telephones The country code for Russia (and Kazakhstan as a former member of the Soviet Union) is 7. Russian telephone numbers have a three-, four- or five-digit area code (depending on the province) followed by an individual number with 7, 6 or 5 digits respectively, which always gives a total of...

Russians are reserved and well-mannered people. Gestures In Russia, smiling is traditionally reserved for friends, and smiling at a stranger can make them feel uncomfortable. If you smile at a Russian in the street, there is a good chance that they will not react in the same way. An automatic American...

Folk culture and cuisine There are more than 160 different ethnic groups and indigenous peoples in Russia. The country's great cultural diversity ranges from the ethnic Russians with their Slavic Orthodox traditions to the Tatars and Bashkirs with their Turkic Muslim culture to the nomadic Buddhist Buryats and Kalmyks, the...

An imperial power Russian identity dates back to the Middle Ages, with the first state known as Kievan Rus and its religion rooted in Byzantine Christianity (i.e. Greek Orthodox as opposed to Latin Catholic) adopted in Constantinople. However, it was not considered part of ordinary Europe until the reign of...

Stay safe in Russia Largely as a result of the transition from state socialism to market capitalism, Russia experienced an increase in criminal activity in the 1990s. As those who controlled capital through the state had to transform their business activities towards the rationality of free enterprise, profits and fraud...