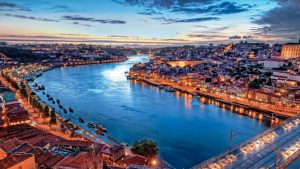 The official language in Portugal is Portuguese (português). Portuguese is one of the main languages in the world today and ranks 6th in terms of the number of native speakers (about 240 million). It is the language with the largest number of speakers in South America, spoken by almost the entire population of Brazil. It is also an official language in Angola, Mozambique, Cape Verde, São Tomé and Príncipe, Guinea-Bissau, East Timor and Macao.

Portuguese is a Romance language. Although it is largely intelligible with Spanish, with about 90% lexical similarities (both in vocabulary and grammar), it is far from identical. The Portuguese are a proud people and are uncomfortable with foreigners from non-Spanish speaking countries speaking the language when they travel to Portugal. While many words can be written almost the same as in Spanish (or Italian), the pronunciation differs considerably. This is because Portuguese has many sounds that are not present in these languages. Spanish is widely spoken, but it is not always the best language unless you come from a Spanish-speaking country.

It should also be mentioned that the pronunciation in Portugal differs significantly from that in Brazil. The difference is mainly in pronunciation and some differences in vocabulary, which makes it difficult even for Brazilians to understand the European Portuguese accent, but not vice versa, as Brazilian pop culture (e.g. soap operas and pop music) is very popular in Portugal. Nevertheless, today’s media have made this difficulty in understanding each other’s accent a side issue.

English is spoken in many tourist areas, but it is far from ubiquitous. Portuguese learn English at school and are also exposed to American and British films and TV shows with original English soundtracks and Portuguese subtitles, so most young people, although shy, have at least a basic knowledge of English. To improve your chances of being understood, speak slowly and stick to simple sentences. In fact, it is very likely that you will speak more English in Portugal than in countries like Spain or France. In the main tourist areas, you will almost always find someone who speaks the main European languages. Hotel staff are obliged to speak English, even if it is only briefly. French has almost disappeared as a second language, except perhaps among older people. German or Italian speakers are rare. About 32% of Portuguese can speak and understand English, while 24% can speak and understand French. Although Spanish is mutually intelligible in the sense that most Portuguese understand it in writing and/or orally, only 9% of the Portuguese population can speak it fluently. If you are a Spanish speaker, chances are you can understand each other very well for the most part, even without an interpreter.

Portuguese people generally have an excellent sense of humour when talking to someone who doesn’t speak their language. This means that all kinds of shopkeepers, vendors and people who are curious about you will take the time to try to find a way to communicate, often with amusing and unexpected results. Helping a stranger is seen as an opportunity and an enjoyable and rewarding experience. If you try to speak Portuguese correctly with the locals, especially if it is a little more complicated, you will be treated with respect and often the locals will apologise for the ‘difficulty’ of learning Portuguese or the ‘difficulty’ of the language and almost adopt you. This can encourage travellers to learn the basics of Portuguese, such as daily greetings and common “thank you, please” expressions.

In Miranda do Douro, a town in the northeast, and its surroundings, some people speak a regional language, the Mirandais, in addition to Portuguese, although rarely in front of people who do not know it.

Foreign television programmes are almost always broadcast in the original language with subtitles. Only children’s programmes are dubbed into Portuguese.

By plane Portugal has five airports with regular international passenger traffic: Lisbon Portela Airport (IATA: LIS) is the main hub with numerous intercontinental connections to the Americas and Africa (mainly operated by the national airline TAP Portugal and its Star Alliance partners), as well as a dense network of connections in...

Language The Portuguese feel genuine pleasure in helping tourists, so don't be ashamed to ask for help. If you make the effort to speak a little Portuguese with locals, it can help you a lot. A large percentage of the young population speaks English and many Portuguese understand basic Spanish. Although...