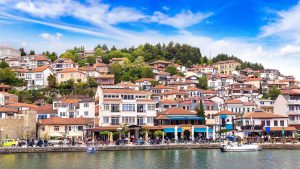 Macedonia has two international airports, one in the capital Skopje called “Alexander the Great Airport” (SKP) and another in Ohrid called “St.Paul the Apostle Airport” (OHD). There are about 150 flights each week from several European locations to Skopje. The Macedonian government granted a contract to a Turkish Airport Operator Company (TAV) to develop a fresh new Terminal building at Skopje Airport. The building was finished in October 2011. Only WizzAir flies directly between Skopje and London (Luton Airport), Barcelona (El Prat Airport), Venice (Treviso Airport), and Milan-Bergamo in Italy.

Another way to enter Macedonia is to fly to Thessaloniki (SKG) or Sofia (SOF) and then take a cab or bus from there. Buses leave Sofia Central Bus Station for Skopje at 09:00, 12:00, 16:00, 17:00, and 23:59. These services are provided by two bus companies, MATPU and Kaleia, both of which are situated outside the main bus station. A single ticket costs around €16. (MKD32). There are other flights from Skopje to Sofia with comparable costs and timings for the return trip home.

Furthermore, if you call the Sofia Tourist Information Service, they will usually be able to put you in touch with private transport firms that will pick you up at the airport and drive you to Skopje. Prices start at €60 and go up to €160. Negotiating with taxi drivers may be more difficult, but you may be able to obtain a better deal.

Regular rail services used to link Macedonia to Greece in the south, however all international trains to Greece were halted in February 2011 until further notice. Northern Serbian services are still available.

The Balkan Flexipass is an inexpensive method to travel to or from Macedonia.

Check that the “MK” box on your Green Card (International Insurance Card) is not cancelled. Unlike in Serbia and Greece, the guards nearly always want to see it. Obtain a decent map of Macedonia and/or learn to read Cyrillic characters. Although most street signs are written in Cyrillic and Latin characters, knowing the Cyrillic alphabet may be useful, particularly in small towns.

The border guards often make a great fuss about obtaining the car’s original papers (no copies). The enforcement rate is 50-50, and if you have a rental vehicle, this may be an issue since you typically have a copy. Certain power hungry guards have already ordered tourists to drive back many hundred kilometers over this detail.

There are bus connections to Skopje from Serbia, Kosovo, Bulgaria, Slovenia, Croatia, and Turkey. Furthermore, some buses, at least those operated by Drity Tours, run from Tirana to Pristina via Skopje (though don’t expect them to wake you up or stop anywhere near the Skopje bus station).

There are two bus terminals in Skopje. The majority of buses arrive at the new terminal, but some connections (such as those to Pristina) are served by the old terminal, which is located in the city center. If you need to change terminals, you must either walk to the stone bridge across Vardar and cross it (approximately 2.5 kilometers) or hire a cab.

Taxi drivers will pester you at both terminals, attempting to persuade you to use their services. You shouldn’t take their advice unless you have a lot of money to throw away. Taxis are likely to be costly, particularly for foreigners, while buses are inexpensive, clean, and safe.

By car Because to the hilly terrain and lack of well-maintained roads, it is common to encounter poorly marked abrupt bends, as well as dangerous obstacles that separate your tires from sheer cliffs. The northern section of the highway network has a short length of road with distinct directions, with...

Regions in North Macedonia PovardarieThe area around the Vardar River, which includes Skopje, the capital and biggest city. Western MacedoniaThe majority of Macedonia's tourism attractions, including the three national parks and Ohrid, can be found here. Eastern MacedoniaThere aren't as many tourist attractions here, but there are some breathtaking views of country...

Ohrid, being the country's main tourist attraction, is clearly more costly than any other location in Macedonia. It should be noted that hotel costs are extremely high across the nation and that visitors are charged double rates. It is therefore preferable to stay in private accommodations. If no one...

Things To See in North Macedonia

This beautiful, small nation has an unexpected number of things to offer. It's a wonderful blend of ancient Balkan, laid-back Mediterranean, and trendy and happening contemporary European vibes. It all begins in vibrant Skopje, the country's capital and economic hub. It has excellent shopping and partying possibilities, as well as...

Food in North Macedonia If you're on a budget, consider one of the Skara (grill) establishments. On the waterfront, there are a number of upmarket restaurants offering higher-quality cuisine, but they appeal to visitors, so don't be shocked by a hefty price at the conclusion of your dinner. Service in restaurants...

Macedonia has a plethora of marketplaces and bazaars that are well worth a visit. The biggest bazaars are in Skopje, Tetovo, Ohrid, and Bitola, and they offer everything from dried peppers to imitation designer eyeglasses. While most of the goods may not be worth purchasing, there is usually a...

Macedonian-Bulgarian, Macedonian-Albanian, and Macedonian-Greek ties are all contentious issues. Most Macedonians have strong political sentiments on their neighbors and will not hesitate to voice them in most instances. Politics is often brought up in casual conversation over a cup of coffee. Avoid subjects such as the 2001 war against...

Domestic Phones Domestic phone service is provided in all populated towns through PSTN or VoIP. T-home operates the PSTN network. The mobile operator ONE offers an inexpensive fixed phone service (wireless and simple to install), both prepaid (no monthly cost, 12 months availability without recharge, recharging for just MKD500/€8) and...

Macedonian is the country's official language and is spoken by almost everyone. Ethnic minorities speak Albanian, Turkish, and Serbo-Croatian. While many young individuals speak English, many elderly ones do not. Most workers, young and old, of tourism-related companies, especially in Skopje, Ohrid, and Bitola, can speak at least basic...

Macedonia has a rich cultural history in the fields of art, architecture, poetry, and music. It is home to a number of historic, protected religious sites. Annual poetry, film, and music festivals are held. Byzantine church music had a significant impact on Macedonian music genres. Macedonia contains a large...

Ancient and Roman period The Republic of Macedonia approximately correlates to the ancient kingdom of Paeonia, which was situated directly north of Macedonia. The Paeonians, a Thracian people, inhabited Paeonia, while the Dardani inhabited the northwest and tribes known historically as the Enchelae, Pelagones, and Lyncestae inhabited the southwest; the...

Macedonia is a safe nation to visit. Driving is not a bad idea, but foreigners should strive to utilize cabs and public transportation wherever feasible. Keep a watch out for pickpockets and keep all valuables secure, as you would in any other country. Hotels and most private accommodations will...