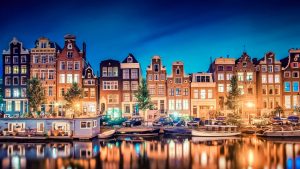 Nightlife in the Netherlands is very diverse. Amsterdam is known for its neighbourhood bars, Rotterdam has a reputation for clubbing, and Groningen, Leiden and Utrecht have an active student scene. Bars offer a wide range of music scenes, but nightclubs are dominated by dancing. Entry to bars is legally permitted from the age of 16, but many bars and nightclubs have stricter policies and do not allow entry to people under 18 or 21.

The Netherlands is known for its liberal drug policy. Although technically still illegal under international treaties, personal use of (soft) drugs is regulated by the Ministry of Justice as part of an official gedogen policy; literally meaning ‘accept’ or ‘tolerate’. Legally, it is a doctrine of non-prosecution on the basis that the action taken would be so irregular as to constitute selective prosecution.

You are allowed to buy and smoke small doses (5 g or less) of cannabis or hashish. You must be 18 years or older to buy it. To do so, you must go to a coffee shop, which are plentiful in most major cities. Coffeeshops are not allowed to sell alcohol and minors (under 18) are not allowed to enter. Coffeeshops are prohibited from explicit advertising. For example, many use the red-yellow-green colours of Rastafari to allude to the products available inside, others are more discreet and sometimes almost hidden.

Hallucinogenic (“magic”) mushrooms, once legal, are officially banned. However, “magic truffles”, which contain the same active ingredients as magic mushrooms, are technically still legal and are sold in some headshops in Amsterdam.

Prostitution is decriminalised, but only for prostitutes who are registered in a licensed brothel. Safer sex and the use of condoms are common practice, and the prostitute usually has them. It is illegal for sex workers to solicit clients on the street. Prostitution is more common in the capital Amsterdam with its red light district, although tourists only go there as a souvenir of their trip. In more rural areas, prostitution is almost non-existent.

By plane Schiphol Airport near Amsterdam is a European hub and the largest in Europe after London, Paris and Frankfurt. It is a sight in itself as it is 4 metres below average sea level. Travellers can easily fly there from most parts of the world and then connect with...

The Netherlands is a member of the Schengen Agreement. There are normally no border controls between the countries that have signed and implemented the treaty. This includes most countries of the European Union and a few other countries.Before boarding an international flight or ship, there is usually an identity check....

There is a wide choice of accommodation that focuses on the main tourist destinations. These include regions that are popular with domestic tourism, such as the Veluwe and Zuid-Limburg. Camping Campsites are widely available in almost every corner of the country and near most major towns. Outside the main tourist season...

Dutch culture For many foreigners, there is nothing that makes the image of the Netherlands better than windmills, clogs, tulips and remarkably flat land. Although some of these characteristics have become stereotypes that are far removed from the everyday life of Dutch people, there is still a lot of truth...

Food in Netherlands Dutch cuisine The Netherlands is not known for its cuisine, because it is simple and uncomplicated. A classic Dutch meal consists of meat, potatoes and a separate vegetable. The country's food culture is rather rustic. The country's high-carbohydrate, high-fat food culture reflects the dietary needs of agricultural workers,...

Currency in Netherlands The Netherlands uses the euro. It is one of the many European countries that use this common currency. All euro banknotes and coins are legal tender in all countries. One euro is divided into 100 cents. The official symbol of the euro is € and its ISO code is...

Festivals in Netherlands Every two years, the country goes crazy for football on the occasion of the European Championship or the World Cup. Whole streets will be decorated with orange flags, the country's national colour. It is not unusual for half the population to watch a match when it is...

Art, Philosophy and Literature The Netherlands has had many famous painters. The 17th century, when the Dutch Republic flourished, was the time of the "Dutch masters", such as Rembrandt van Rijn, Johannes Vermeer, Jan Steen, Jacob van Ruisdael and many others. The most famous Dutch painters of the 19th and...

Prehistory (before 500 BC) The prehistory of the region that is now the Netherlands was largely shaped by the sea and rivers, which constantly shifted the low-lying geography. The oldest human (Neanderthal) traces in the Netherlands were found in higher terrain near Maastricht and probably date back to about 250,000...

Stay safe in Netherlands Crime The Netherlands is generally considered a safe country. However, be vigilant in Amsterdam, Rotterdam, The Hague and other major cities, where pickpocketing and bicycle theft are common; violent crime is rare. In larger cities, some outer districts are considered unsafe at night. The police, ambulance and fire...