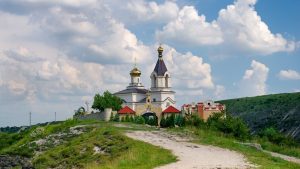 EuropeMoldovaThings To See in Moldova

In downtown Chişinău, there are many museums, including the Museum of Archaeology and Ethnography, the Museum of Natural History, and the National Museum of Fine Arts.

Moldova is well-known for producing wines, and high-quality wines at reasonable costs are the country’s primary tourist draw.

Milestii Mici – With almost 200 kilometers (125 miles) of subterranean roads, Milestii Mici is the world’s largest wine collection, according to Guinness World Records. Because a vehicle is required for the trip, it may be easier to arrange a tour via a travel agency. +373 22 382 333.

Cricova, Moldova’s second biggest wine cellar, contains more than 120 kilometers (75 miles) of subterranean roads. It is a popular tourist destination and is just a 15-minute drive from Chişinău. +373 222-277-378

Purcari – One of Moldova’s oldest vineyards, Purcari wine has been consumed by Russian Emperor Nicolai II and English King George.

Branesti is a smaller and more affordable wine cellar. It is near to the Orheiul Vechi Monastery, making it ideal for combining a monastic visit with wine sampling.

Orheiul Vechi – Moldova’s most well-known attraction is a 13th-century Cave Monastery approximately a half-hour drive from Chişinău. A tourist center with a small museum, restaurant, and hotel lies just up the road. Call ahead to +373 235 34 242 to make sure it’s open. The entrance fee to the facility is 20 lei or 15 lei if you are a student – yet no one seems to bother stopping to pay. Every day, six marshrutka trips operate between Chişinău’s central bus station and the tourism complex. There are enormous rocks nearby that hold six more systems of interconnecting caverns. It is strongly recommended not to explore them without the assistance of an expert guide. Just off the river are the ruins of a Turkish bath house.

Capriana Monastery is one of Moldova’s most important monasteries, located just 40 kilometers (25 miles) from Chişinău. Buses leave Calea Ieşilor in Chişinău’s Sculeni district every hour in the morning.

Bender (or Tighina in Romanian) – The Fortress of Bender is another fortress, although it is now being utilized as a military training field and is off bounds. The finest views are from the bridge that leads to Tiraspol.

Tipova Monastery is a rock monastery in the middle of Moldova, near the Nistru River.