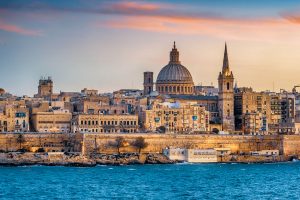 Maltese and English are the official languages. The Italian language is widely known and spoken. Some individuals in Malta speak basic French, but very few speak fluent French. All official papers in Malta are required to be written in both Maltese and English, and many radio stations transmit in both languages. Almost all Maltese people speak English well, and some even have a typical British accent.

Maltese is a Semitic language, although it has acquired a lot of terminology from Romance languages (particularly Italian). The nearest living cousin of Maltese is Arabic, namely Maghrebi Arabic (spoken in Morocco, Tunisia, and Algeria), but Maltese is written in the Latin alphabet rather than the Arabic script. Maltese is also more closely linked to Hebrew and Amharic, so you’ll notice some similarities if you know any of these three languages. It also contains a significant amount of English. Knowing a few Maltese words may come in handy.