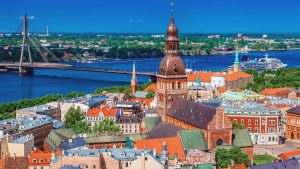 Latvians are typically quiet and respectful of others’ personal space; for example, strangers are seldom greeted unless they are introduced by someone. Although social ethics may not demand it, you may give someone assistance with anything, such as lifting something heavy.

When it comes to relationships and friendships, Latvians are notoriously difficult to please. In conversations, you won’t see nearly as many heart emoji as you would in other southern European nations, for example.

Near most shops, there are many garbage cans and waste bins along the pavements. Littering is considered impolite, and violators may be punished in certain cases.

Holding a door open for someone, allowing others to board a bus or train before you, and so on are all considered courteous in Latvian society. This is especially true when males let women go first.

When discussing politics and history with Latvians, particularly the Soviet Union, you should be cautious (USSR). After World War II, Latvia became a Soviet country, and many Latvians, particularly the older generations, have strong feelings on the subject. It is doubtful that praise for the Soviet and Russian governments would be understood or appreciated. Younger Latvians may be more receptive to the subject, but they all have the same viewpoint.