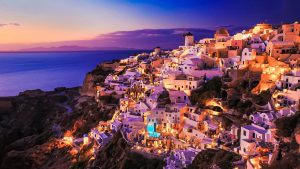 Greece, although small in size, has a very diverse climate.

The majority of the country, which includes all coastal areas, has a so-called Mediterranean climate, which is nearly the same as most parts of California. Summers are hot and dry with a period of 7 months of almost constant sunshine, usually from April to November. The rest of the year is characterized by a relatively cold and rainy period that usually begins in November and lasts until late March or early April. Sporadic rainfall occurs during the dry season, but it is usually brief and infrequent. The Ionian coast and islands generally receive more annual rainfall than the rest of the country. The islands in the southern Aegean Sea and parts of the south-eastern mainland are the driest areas of the country.

The most pleasant weather is in May-June and September-October. The hottest period of the year begins in mid-July and usually lasts until mid-August, when the annual Meltemia winds from the north cool the land. The period from mid-July to mid-August is the height of summer, and the midday sun tends to be very strong; during this period, most Greeks avoid intense outdoor physical activity between 1 and 5 pm. It is best to adapt to the lifestyle of the locals by getting up early, doing all your sightseeing and shopping in the cool morning hours and then spending the afternoon in the shade or on the beach. In fact, the majority of tourists come to Greece at the height of summer to do this! For visitors from more northern climes, the low season, from November to February, can be a rewarding time to visit Greece. It won’t be beach weather, but the temperatures will be mild. The big advantage is that there are very few other tourists and prices are reduced.

Summer evenings tend to be very rewarding. As strong as the sun may shine on a summer afternoon, the low humidity in most parts of the country prevents the air from retaining much heat, and temperatures tend to drop to very comfortable levels in the evenings. But even at noon, the high temperatures are actually quite pleasant, as long as you don’t spend your time running or doing other physical activity. (However, Athens can be uncomfortably hot on summer afternoons, as the city is mostly concrete, an effect similar to that of New York). Coastal areas close to open water (away from bays and narrow gulfs), especially on many islands, tend to be quite windy and can be quite cold at night.

While the Mediterranean climate dominates most of the country, there are two other climate systems. One is the cool Alpine climate, which is found in the mountainous inland areas, including many high-altitude valleys. Another system is the continental climate, found in the interior of north-central and north-eastern Greece, which gives these regions very cold winters and hot, relatively humid summers.

By plane Eleftherios of Venizélos International AirportAthens, near Spáta, on the outskirts of Athens, is the country's largest airport and main hub, handling more than 15 million passengers per year since 2006. Other major international airports in terms of passenger traffic are, in order of passengers handled per year, Heraklion...

General considerations A common question asked by travellers in Greece is whether they should rent a car. The main advantage of a car is that you can cover much more distance per day if you are travelling to rural areas or the larger islands: You can travel almost anywhere in...

Greece is a member of the Schengen Agreement. There are normally no border controls between the countries that have signed and implemented the treaty. This includes most countries of the European Union and a few other countries.Before boarding an international flight or ship, there is usually an identity check. Sometimes...

If you like local traditions and charm, the quiet rhythm of life, small family guesthouses are the best way to enrich your experience. The owners and staff are friendly and approachable, compared to the impersonal service you usually find in big hotels. If you have a larger budget, renting a...

Food in Greece Greek cuisine is a mixture of local traditions and foreign influences. The neighbouring countries of Italy and Turkey have a great influence on Greek cuisine, and there are dishes in common with both nations. The traditional Greek diet is very Mediterranean, with vegetables, herbs and grains from...

News You can check with various news agencies that offer Greek news in English, such as the official news agency of Athens and Reuters or Kathimerini, English Edition (a daily newspaper published in Athens and distributed exclusively with the International New York Times in Greece and Cyprus), but it is...

Ancient and Classical periods The first evidence of the presence of human ancestors in the southern Balkans, dating back to 270,000 BC, was found in the Petralona Cave in the Greek province of Macedonia. The three stages of the Stone Age (Palaeolithic, Mesolithic and Neolithic) are represented in Greece, for...

Stay safe in Greece Greece is generally a safe destination: the vast majority of people you deal with are honest and helpful. The above information is intended to warn travellers of the risks that can affect them with little but not zero probability. There is also a serious social problem...