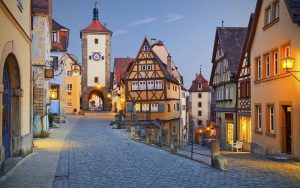 According to the law, “Sundays and public holidays remain protected as days of rest from work and of spiritual upliftment” (Art. 139 WRV, part of the Basic Law via Art. 140 GG). Thus, all Sundays are holidays in a sense – but they are not generally understood under the term “holiday” (except usually Easter Sunday and Pentecost Sunday).

Public holidays, with the exception of Sundays (which must exist under constitutional law), can be established by law either by the Federation or by the Länder for their respective areas of jurisdiction. Under federal law, only the Day of German Unity is currently a public holiday (Unity Treaty, Article 2(2)); the others, including those celebrated nationwide, are public holidays under the law of the Länder.

A few days are designated as “silent days” by provincial legislation, which regularly means that public dancing, music in hostels (if live or not much quieter than usual), etc. are prohibited.

Some holidays are quiet days:

a de facto holiday (not established by law, as it is always a Sunday, but with officially organised celebrations) is a day of rest:

Another Sunday is a quiet day:

and some days can be quiet days without being holidays:

In a few cases – apart from All Saints’ Day, which, however, has long been associated with commemoration of the dead in the popular understanding – the status of silent days is also given to festivals with a joyful character: In Hesse, the highest Christian festivals are Half Days of Silence (until 12 noon) and in Rhineland-Palatinate, Easter Sunday and Christmas Day are Two-Thirds Days of Silence (until 4 pm). For more details, see the German article on the ban on dancing.

A third category, which in a sense can be called “holidays”, are “flagging days”. Only the highest institutions and the military use the national flags every day, so the guidelines for displaying the flags mark the days in question as special.

Flagging is regulated by the federal decree on

In times of national mourning, flags are often hoisted ad hoc to half-mast.

Rosenmontag or Faschingsdienstag is a de facto public holiday in some cities in western and southern Catholic Germany that have a strong carnival tradition.

Moreover, Christmas Eve becomes a kind of half-holiday: from the afternoon onwards, it is practically considered a public holiday, and while shops are still open in the morning, working in businesses (apart from those that also work on public holidays) becomes increasingly unusual; schools are closed anyway.

Ascension Day and Corpus Christi are always on Thursday. If you only take one day off, staff can have a four-day weekend.

The Day of the Magi, better known as Epiphany, is 6 January, the day after the 12 days of Christmas. In some parts of Germany it has its own local customs.

Germany is a member of the Schengen Agreement. There are normally no border controls between the countries that have signed and implemented the treaty. This includes most countries of the European Union and a few other countries.Before boarding an international flight or ship, there is usually an identity check. Sometimes...

Regions in Germany Germany is a federal republic consisting of 16 states (called Bundesländer). Three of these federal states are actually city states: Berlin, Bremen and Hamburg. The federal states can be roughly grouped by geographical areas as shown below, although other groupings exist. For a long time, the division...