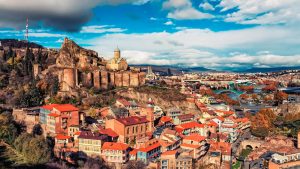 Kartli
The Georgian heartland, the core of East Georgian culture, and the nation’s economic, cultural, and political center; home to the most popular tourist attractions of Tbilisi, Mtskheta, Gori, and Stepantsminda.

Rioni Region
The capital of West Georgia and the ancient kingdom of Colchis, the land of the Golden Fleece; nowadays, it is home to beautiful UNESCO monuments and stunning mountainous landscapes.

Northwestern Georgia
Magnificently gorgeous, hazardous, and politically unpredictable, but worth the risk of a visit to experience Upper Svaneti’s once-in-a-lifetime dream.

Samtskhe-Javakheti
Home to much of Georgia’s Armenian population, Vardzia, and the enchanting Sapara Monastery

Disputed Territories (Abkhazia, South Ossetia)
Georgia’s separatist territories, which are at odds with the national government; Abkhazia is a lovely subtropical beach and volcanic resort, whereas South Ossetia lies high in the Greater Caucasus Mountains, with nothing to offer a visitor other than continuous danger and mountain views.

The absence of Abkhazia and South Ossetia from the regional hierarchy is simply a practical difference, since travel circumstances in these two areas vary significantly from those in the rest of Georgia.

Other destinations in Georgia