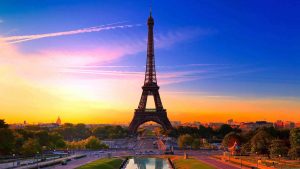 France was visited by 84.7 million foreign tourists in 2013, making it the most popular destination in the world. Thanks to shorter stays, it ranks third in tourism receipts. 20% more tourists spent less than half of what they spent in the United States.

France has 37 sites inscribed on the UNESCO World Heritage List, including cities of great cultural interest (first and foremost Paris, but also Toulouse, Strasbourg, Bordeaux, Lyon, etc.), beaches and seaside resorts, ski resorts and rural regions that many people appreciate for their beauty and tranquillity (green tourism). Small picturesque French villages with a quality heritage (such as Collonges-la-Rouge or Locronan) are highlighted by the association Les Plus Beaux Villages de France (litt.). The label “Jardins remarquables” is a list of more than two hundred gardens classified by the French Ministry of Culture. This label serves to protect and promote remarkable gardens and parks.

Most tourists arriving in France in 2014

Most tourists arriving in France in 2014 came from the following countries:

Number of overnight stays in France in 2014

Paris, the capital, is the third most visited city in the world. Paris has some of the most important and prestigious museums in the world, including the Louvre, which is the most visited art museum in the world, but also the Musée d’Orsay, which is mainly dedicated to Impressionism, and the Beaubourg, which is dedicated to contemporary art. Paris is home to some of the world’s most famous monuments, such as the Eiffel Tower, which is the most visited paid monument in the world, the Arc de Triomphe, Notre-Dame Cathedral and the Sacred Heart. The City of Science and Industry is the largest science museum in Europe. Located in the Parc de la Villette in Paris, France, it is the centrepiece of the Centre culturel des sciences, des technologies et de l’industrie (CCSTI), a centre for the promotion of science and scientific culture. Near Paris is the Palace of Versailles, the former palace of the Kings of France, which is now a museum.

With more than 10 million tourists a year, the Côte d’Azur in southeastern France is the second largest tourist destination in the country, after the Paris region. According to the Côte d’Azur Economic Development Agency, it enjoys 300 days of sunshine a year, 115 kilometres of coastline and beaches, 18 golf courses, 14 ski resorts and 3,000 restaurants. The Côte d’Azur hosts 50% of the world’s superyacht fleet each year, 90% of which visit the region’s shores at least once in their lifetime.

A large part of Provence will be named European Capital of Culture in 2013. The region is home to many famous natural sites, such as the Gorges du Verdon, the Camargue Regional Nature Park, the Calanques National Park and the typical landscape of the Luberon. Provence is home to dozens of famous historical sites such as the Pont du Gard, the Roman monuments in Arles or the Palace of the Popes in Avignon. Some cities also attract many tourists, such as Aix-en-Provence, Marseille or Cassis, on the coast of the Mediterranean Sea.

Another important destination is the castles of the Loire Valley. This World Heritage Site stands out for the quality of its architectural heritage, in its historic towns such as Amboise, Angers, Blois, Chinon, Nantes, Orleans, Saumur and Tours, but above all for its castles (chateaux), such as the castles of Amboise, Chambord, Ussé, Villandry and Chenonceau, which illustrate in an exceptional way the ideals of the French Renaissance.

France has many cities of cultural interest, some of which are classified as “Cities of Art and History” by the French Ministry of Culture.

The most beautiful villages in France

Some criteria must be met before joining the association: The population of the village must not exceed 2,000, there must be at least 2 protected areas (picturesque or legendary sites or sites of scientific, artistic or historical interest), and the decision to apply must be taken by the local council.

Other regions of France

In the east of France, there are ski resorts in the Alps.

Famous are the Mediterranean beaches of the French Riviera, Languedoc-Roussillon or Corsica. Away from continental tourism, there is French Polynesia (especially Tahiti), the Caribbean islands (Martinique, Guadeloupe, St Martin and St Barthélemy).

The Route Napoléon, the route Napoleon took on his return from exile in 1815, starts at Golfe-Juanto Grenoble in south-eastern France. It is a scenic route and a very popular destination.

The monuments to the battles of the First and Second World Wars are also popular. The former include the Mémorial des disparus de la Somme, the latter the D-Day Museum in Arromanches, one of the landing sites.

There are also many large natural areas with important collections of flora. For example, the federal arboretum of Pézanin gathers one of the richest forest collections in France, or the regional nature parks scattered throughout the territory.

France attracts many religious pilgrims on their way to Santiago de Compostela or to Lourdes, a town in the Hautes-Pyrénées that receives several million visitors every year. The Taizé community has become one of the most important Christian pilgrimage sites in the world. More than 100,000 young people from all over the world make a pilgrimage to Taizé every year to pray, study the Bible, share and work together.

Most popular sites by number of visitors

The most popular tourist destinations include (number of visitors per year) :

By plane Flights to/from Paris The main international airport, Roissy - Charles de Gaulle (IATA: CDG), is probably your point of entry if you arrive in France by plane from outside Europe. CDG is the headquarters of Air France (AF), the national airline, for most intercontinental flights. AF and the SkyTeam...

France is a diverse and colourful country and you will find everything from beautiful wooden chalets in the Alps to castles in the countryside to seaside villas on the Côte d'Azur - and everything in between! Hotels in France The hotels are divided into 5 categories from 1 to 5 stars....

Food in France With its international reputation for gastronomy, few would be surprised to learn that French cuisine can be quite good. To prove it, France is joint first with Japan in the ranking of countries with the most Michelin-starred restaurants. Unfortunately, it can also be quite disappointing; many restaurants...

Vacations Many French people take their holidays in August. Therefore, outside the tourist areas, many small shops (butchers, bakeries...) will be closed for part of August. This applies to many businesses as well as doctors. In tourist areas, shops are naturally more likely to be open when tourists come, especially...

Holidays in France French public holidays are based on the major Catholic holidays, with the exception of Good Friday, which is only celebrated in the prefecture of Alsace. Although most of them are movable, the Assumption of the Virgin Mary always falls on 15 August, All Saints' Day on 1...

France has been a centre of Western cultural development for centuries. Many French artists were among the most famous of their time, and France is still known worldwide for its rich cultural tradition. Successive political regimes have always encouraged artistic creation, and the creation of the Ministry of Culture in...

Prehistory (before the 6th century BC) The oldest traces of human life in what is now France date back about 1.8 million years, when humans were confronted with a harsh and changeable climate marked by several ice ages. The first homonids led a life as nomadic hunter-gatherers. In France there...

Stay safe in France Crime Crime-related emergencies can be reported by calling the toll-free number 17 or 112 (European emergency number). The law enforcement agencies are the National Police in urban areas and the National Gendarmerie in rural areas, although some towns and villages also have a municipal police (Police Municipale)...