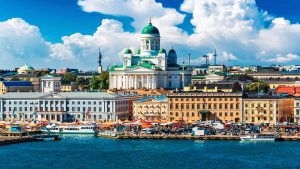 Finns are generally laid-back when it comes to manners and dressing up, and a visitor is unlikely to offend them by accident. In most cases, common sense is sufficient, however there are a few of considerations to bear in mind:

Finns are a notoriously quiet people with little time for small talk or social niceties, so don’t expect to hear phrases like “thank you” or “you’re welcome” very often. Because the Finnish language lacks a term for “please,” Finns may forget to say it while speaking English, even when they have no intention of being impolite. The difference between “he” and “she” is also missing in Finnish, which may lead to confusion. Loud speaking and laughing are not common in Finland and may annoy some Finns. Occasional silence is seen as a natural element of the discussion, rather than as a sign of animosity or annoyance. Although the word mitä kuuluu translates to “how are you?” in Finnish, it has a literal sense, i.e. a lengthier conversation is anticipated; it is not part of the welcome as it is in English.

All of this is to say that Finns are usually friendly and courteous, and they are happy to assist bewildered visitors if requested. The absence of pleasantries is due to the fact that honesty is highly valued in Finnish society; one should open one’s lips only to mean what one is going to say. When there is no later time to be anticipated, do not add “maybe later.” A tourist is unlikely to get many praises from Finns, but those that do are likely to be sincere.

Punctuality is another highly valued virtue in Finland. Even if they are just a few minutes late, visitors should apologize. Being late for an extended period of time generally necessitates a brief explanation. Typically, ten minutes is regarded the difference between being “acceptably” late and being very late. Some people will depart pre-arranged meeting places after fifteen minutes. With the invention of mobile phones, it is now common practice to send a text message even if you are just a few minutes late. Being even one or two minutes late for a business meeting is considered impolite.

A handshake is the traditional greeting. Hugs are only given to family members and close friends in certain circumstances, and kisses, especially on the cheek, are almost never given. Touching is usually reserved for family members. The gap between strangers is about 1.2 m, while the space between friends is approximately 70 cm.

The only mistake guests may make when welcomed to a Finnish house is failing to remove their shoes. Shoes will carry a lot of snow or dirt for the most of the year. As a result, even in the heat, it is usual to remove them. During the rainy season, you may request that your shoes be placed someplace to dry during your stay. These restrictions do not apply to more formal events held in private houses, such as baptisms (which are often held at home in Finland) or someone’s 50th birthday celebration. In the winter, this may imply that visitors bring clean shoes and put them on while leaving outside shoes in the hall. Bringing a gift to the host, such as a pastry, wine, or flowers, is welcomed but not necessary.

In Finland, there isn’t much of a clothing code. The typical dress code is informal, and even in business meetings, the dress code is more relaxed than in other nations (although sport clothing in a business meeting is indeed bad form). Topless sunbathing is acceptable but not particularly popular on beaches in the summer, but it is prevalent in lakeside saunas and the rare dedicated nudist beaches; at regular public beaches, swimwear is required for everyone over the age of six.

Finns are very egalitarian. Women engage in society and have positions of leadership all the way up to the Presidency. Both genders are to be treated with equal respect, and there is minimal official sex segregation. Because social status is not typically an essential component of social etiquette, a Dr. Spencer is frequently addressed to as just “Spencer,” rather than “tohtori Spencer” or “herra Spencer,” without any disrespect intended.