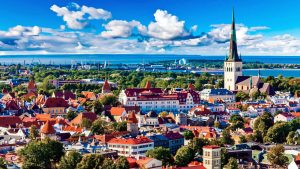 The Estonian currency is the euro. It is one of many European nations that utilize the Euro. All euro banknotes and coins are legal tender across the EU.

ATMs and currency exchange offices (valuutavahetus) are common. You will obtain the greatest exchange rates if you exchange only after arriving in Estonia. Avoid exchanging money at the airport or port since the exchange rates are cheaper.

Tipping became popular in Estonia just after the country regained its freedom, thus it isn’t usually expected. In restaurants, a 10% tip is typically included to the bill, while taxi drivers often retain the change. Some restaurants and bars feature a jar or box on the counter labeled ‘Tip’ where customers may place their spare coins.

Estonia is usually less expensive than Western Europe, although it is no longer the bargain cellar it was in the 1990s, and costs in touristic regions may be comparable to Scandinavian levels.

Regions in Estonia The country of Estonia is split into 15 counties (or maakonnad, singular - maakond). In this guide, we utilize four different areas to highlight Estonia's unique features. Because Estonia is a tiny country, most places can be visited in a few hours from Tallinn. North Estonia With almost a...

When meeting a stranger, Estonians in general are surprisingly reticent to begin with. They don't speak much in the way of social pleasantries or small chat; they just say what's appropriate. Once you've broken the ice, you'll find them to be open and honest. Estonians maintain a physical distance from...