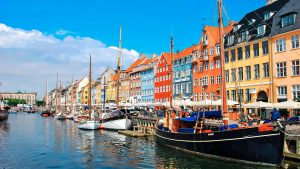 EuropeDenmarkHow To Travel To Denmark

Denmark is serviced by two large airports and numerous smaller airports, almost all of which have international connections. Although most European airlines fly to Copenhagen and several also fly to Billund, SAS Scandinavian Airlines remains the leading carrier. Norwegian, Easyjet, Transavia, and ultimately Ryanair are key participants in the low-cost sector.

There are six direct trains each day from Hamburg to Copenhagen, one of which continues to Berlin every two hours. These trains are put onto a boat for the crossing from Puttgarten to Rdby, and the entire trip duration is about 4.5 hours (6.5 hours to Berlin). The ferry route also serves as a border crossing, and there are plans to replace it with a bridge-tunnel combination that will open somewhere in the 2020s between the German island of Fehmarn and Denmark. There are additionally two trains each day from Hamburg to Aarhus, one of which originates in Prague. Other German trains include those from Flensburg to Copenhagen and Niebüll to Esbjerg. If you’re traveling from afar, there’s a night train from Amsterdam, Basel, Berlin, and Prague that stops in Denmark at Padborg, Kolding, Odense, Roskilde, and Copenhagen. However, the ongoing survival of these night trains is far from certain. There are hourly direct trains from Gothenburg and up to five direct trains from Stockholm to Copenhagen from Sweden. In addition to direct trains, resund trains link Copenhagen with trains ending in Malmö every 20 minutes, covering the trip in 35 minutes (currently up to an hour more from Denmark to Sweden because of the Swedish border control to stop refugees)

Denmark is directly linked to the German Autobahn through route E45 (German route 7), which passes near to Hamburg and goes along the east coast of the Jutland peninsula all the way to Frederikshavn in the north, passing via Denmark’s second largest city Aarhus along the way. Many drivers traveling from Germany to Copenhagen take one of the regular car ferries, which cut the trip by 137 kilometers from Hamburg and 309 kilometers from Berlin, respectively, and avoid the DKK235 bridge toll, so the cost of the ferry crossing is nearly offset by the extra gas required to take the long route around.

From Sweden, use the E20 route from Gothenburg (312 km) or the E4 route from Stockholm (655 km) to Malmö and link with the Øresund bridge (DKK325). Many Norwegians use this route to Copenhagen, although there are many vehicle ferries that bridge the strait between the two nations, particularly to Hirtshals on the north point of Jutland, which is linked to the Danish highway network.

Long-distance buses are a more cost-effective alternative to trains if you are in one of the neighboring nations. Several bus companies provide services from Hamburg and Berlin to Copenhagen and Aarhus in Germany. A journey from Berlin to Copenhagen may cost as low as DKK 200, but will usually cost about DKK300 (€40) and take around 8 hours. Another typical trip from Hamburg to Aarhus takes about 512 hours. Flixbus, Eurolines, and Abildskou are three businesses to look at. Many of the firms that operate intercity buses in Germany also have stops in Denmark.

There are three daily connections and a night bus from Gothenburg (4.5 hours) and Oslo (8 hours), and two daily buses from Stockholm (9 hours) divided into a day and a night bus, check out GoByBus and Swebus for prices and schedules – when searching, it may be helpful to know Copenhagen is Köpenhamn in Swedish.

Because of the Bosnian conflict in the 1990s, many bus companies serve the Bosnian diaspora, providing a cheap and hygienic means to travel to the other side of the European continent. Toptourist and Autoprevoz operate from different locations in Bosnia & Herzegovina and Serbia to Denmark, with a roundtrip ticket costing about DKK1,000 (€140) in the off-season.

The shortest route between Norway and the continent is through the Danish roads, which has resulted in regular ferry links to Norway, with the main port being Hirtshals, from which a journey to Norway may take as little as 312 hours. Other popular routes include the Rdby-Puttgarden ferry, which is the quickest route between Sweden and Copenhagen to continental Europe and is still one of the busiest ferry crossings in the world (though a bridge is on the drawing board). An alternate route from Poland to Zealand is through the ports of Ystad or Trelleborg in Sweden, as well as the resund Bridge. Ferries are usually of extremely high quality, with rigorous adherence to safety standards.