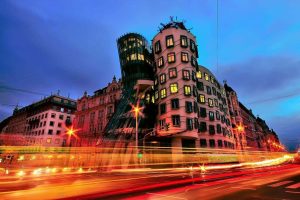 Václav Havel Airport, situated approximately 10 kilometers west of the center of Prague (Praha in Czech), serves as a hub for Czech Airlines (SA), a SkyTeam member.

There are many low-cost airlines that fly to and from Prague (e.g. EasyJet from Lyon). Ryanair flies from London and Bergamo to Brno. Nuremberg (200km) and Munich (320km) in Germany, Vienna (260km to Prague, 110km to Brno) in Austria, Wroclaw (200km) in Poland (may be a good option if you want to travel to the Giant Mountains), and Bratislava (280km to Prague, just 120km to Brno) in Slovakia are all neighboring airports.

You may use the following options to go from Ruzyn Airport to the center of Prague and beyond:

International bus service is available from several European cities, with direct connections from Germany, Poland, the Netherlands, Slovakia, Switzerland, and Austria, among others. Eurolines and Student Agency provide excellent service. PolskiBus provides low-cost tickets from Poland. Almost all modern long-distance bus companies in Germany, as well as Deutsche Bahn, provide buses from different locations in Germany or Austria to Prague; for a price list, see this German website. Because the industry is still extremely young and dynamic, businesses may stop operations or re-emerge at any time.

International rail service is available from the majority of European countries, with direct connections from Slovakia, Poland, Germany, the Netherlands, Switzerland, Austria, Hungary, Serbia, Belarus, and Russia; in the summer, it is also available from Romania, Bulgaria, and Montenegro.

Every two hours, EC trains run from Berlin or Hamburg to Prague and Brno through Dresden and Bad Schandau in Saxon Switzerland. Cologne, Frankfurt, Karlsruhe, Copenhagen, and Basel are all served by direct overnight sleeper trains. If purchased in advance, cheap tickets to Prague (and sometimes to Brno) are available on the German railroads website. The prices range from €19–39 for a seat to €49 for a couchette.

German Railways operates fast non-stop buses between Nuremberg, Munich, and Mannheim and Prague, which are completely integrated into the German railway fare. If you have an InterRail or Eurail card, keep in mind that these buses need a reservation.

There are four daily trains from Munich to Prague, although they are slower than the bus described above due to the sluggish and twisty (but scenic) track near the southern Czech border. The cheapest option is to combine a Bayern Ticket  (€21 for one person, €29 for groups of up to five persons) to the Czech border with a Czech domestic ticket.

Consider purchasing a Bayern-Böhmen-Ticket or a Sachsen-Böhmen-Ticket if you cross the border by local train (not EC or EN). If you live near the Czech-German-Polish border, you may take advantage of the ZVON transportation system’s single fare.

There is just one direct EC train from Warsaw to Prague and Ostrava, as well as direct sleeper trains from Warsaw and Kraków. The midday train ticket costs €19–29 if purchased at least three days in advance. There is no such low-cost option for night trains, but you may utilize a difficult combination.

Local trains (not IC or EC) sell a special cross-border ticket (Polish: bilet przechodowy) that is valid between Czech and Polish border stations (or vice versa) and costs just 15 K or PLN2. You may purchase it from the train conductor (or totally disregard it if the conductor does not appear before you reach the opposite border stop, which occurs) and mix it with domestic tickets from both countries. You may take advantage of the ZVON transport system uniform fare along the Czech-German-Polish border.

Railjet trains run every two hours from Graz and Vienna to Prague and Brno. There are two direct connections from Linz to Prague and two more with a change at eské Budjovice.

If purchased at least three days in advance, cheap tickets to Prague, Brno, and Ostrava are available on the Austrian Railways website. The fare starts at €19 for Vienna-Brno and rises to €29 for Vienna-Prague and Linz-Prague.

If you cross the border on a local train (not an IC or an EC), you may get a reduced return ticket EURegio.

Full-price international tickets are very costly, therefore if no commercial deal suits your requirements, you may save money by combining domestic flights:

The names of the border points are as follows:

Stay Safe in Czech Republic Taxi drivers: Caution: Before using a cab or using a reliable business, negotiate the price (e.g. Liftago, Uber). Taxi drivers in Prague are notorious for driving you the longest route possible in order to make more money. The Prague City Council has enacted new rules...