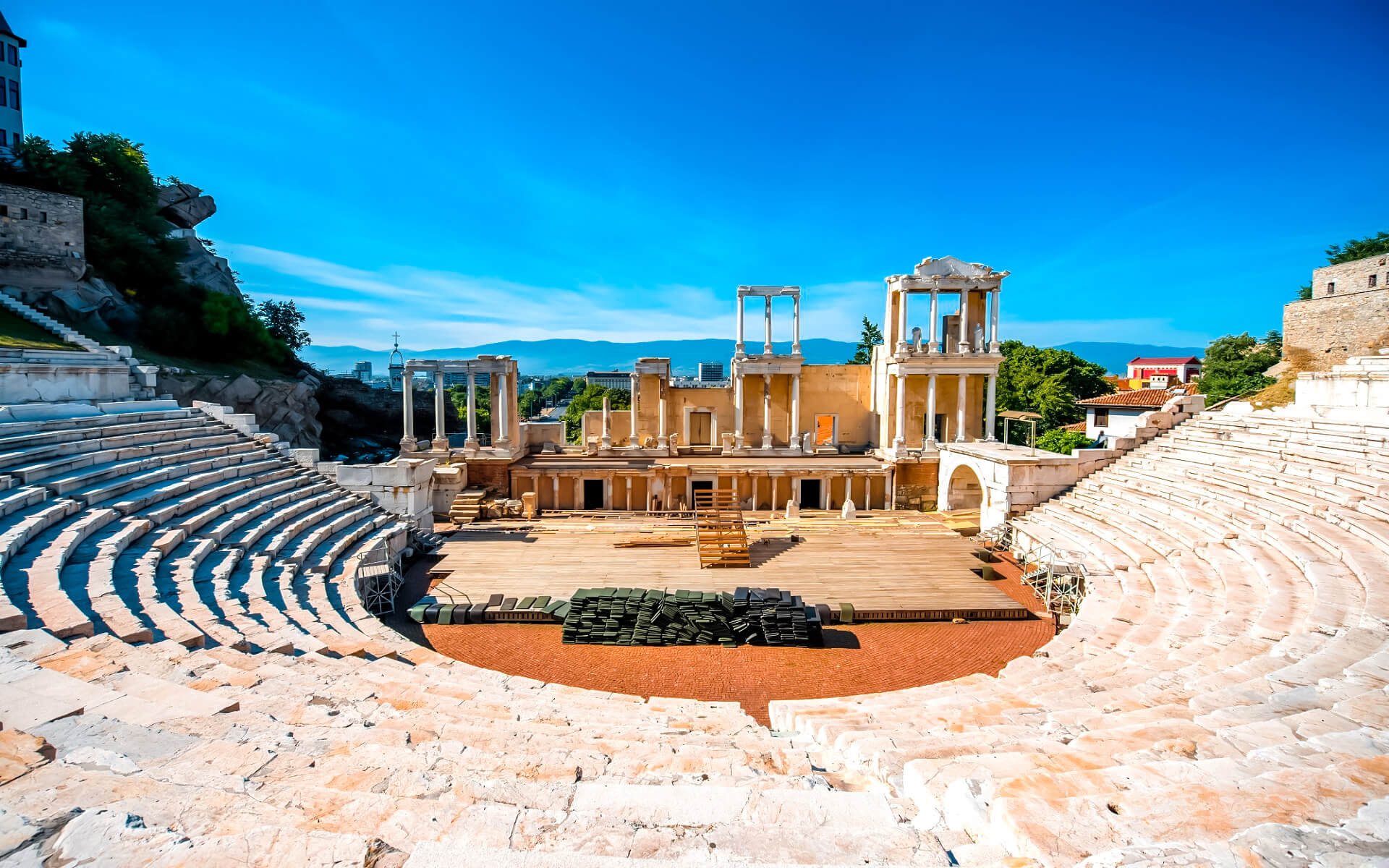 Plovdiv is Bulgaria’s second-largest city, with a population of 341,567 people in 2015, and a population of 544,628 in its urban area. It is a vital economic, transportation, cultural, and educational hub.

Plovdiv has been inhabited from the sixth millennium BC. There was already a Neolithic village there by the end of the fourth millennium BC. The settlement grew into a true town occupied by Thracians in the 12th century BC, making it one of the world’s oldest towns. For the majority of its documented history, Plovdiv was known as Philippopolis (Greek: o; Turkish: Filibe; “Philip’s Town”). The city was founded by the Thracians and was subsequently attacked by the Persians, Greeks, Celts, Romans, Goths, Huns, Bulgarians, Slav-Vikings, Crusaders, and Turks. The Russian army rescued Plovdiv from Ottoman authority on January 4, 1878. It remained under Bulgarian boundaries until July of that year, when it was designated as the seat of the independent Ottoman district of Eastern Rumelia. Plovdiv and Eastern Rumelia became part of Bulgaria in 1885.

Plovdiv is located on the two banks of the Maritsa River in a rich area of south-central Bulgaria. The city sprang up atop seven syenite hills, some of which are 250 meters (820 feet) tall. Plovdiv is known in Bulgaria as “The City of the Seven Hills” because of these hills.

Cultural events in Plovdiv include the International Fair Plovdiv, the international theatrical festival “A stage on a crossroads,” and the TV festival “The Golden Chest.” Many antiquity remnants have been preserved, including the old Plovdiv Roman theatre, Roman odeon, Roman aqueduct, Roman Stadium, the archaeological complex Eirene, and others.

The first American educational institution outside of the United States was established in Plovdiv in 1860, and it was eventually relocated to Sofia, where it is now known as the American College of Sofia.

Plovdiv was chosen as Bulgaria’s European Capital of Culture 2019 on September 5, 2014. This was made possible with the assistance of the Municipal Foundation “Plovdiv 2019,” a non-governmental entity founded in 2011 by Plovdiv’s City Council. The major goals were to create and finalize Plovdiv’s proposal book for European Capital of Culture in 2019. The organization is governed by a board of directors comprised of nine members and an Executive Director. The foundation also has a Public Council, which is led by the mayor, and a Control Board, which oversees the organization’s work. The foundation’s primary goal is to design and execute a bid book strategy.

With a history dating back to 6000 BC, Plovdiv is debatably Europe’s oldest continuously inhabited city. It had seven towering hills at one time, some of which were utilized for quarries. It was previously known as Eumolpias, a Thracian village. With different inhabitants and rulers, the city’s name has changed numerous times: from Philippoupolis and Pulpudeva (“the city of Philip,” the father of Alexander the Great), to Pldin, Plpdiv (лдив), and Plovdiv. They also left their mark: various Roman ruins may be seen in or around the city center region. During the Ottoman Empire’s lengthy occupancy, a massive mosque, which still stands in the city center, was erected. During the Communist era, a monument of an unknown Russian soldier was constructed on one of the city’s three major hills.

Plovdiv is becoming a popular tourist destination in its own right, as well as a gateway to a variety of other attractions. Plovdiv is well-known for its ancient, medieval, and enlightenment sites, as well as for holding the Plovdiv International Fair twice a year.

When you visit Plovdiv, you may obtain assistance and additional information about the city at one of the city’s two tourist information centers. The first is in the city center, immediately next to the post office; whether you arrive by rail or bus at “Yug” or “Rhodopi” stations, this is one of the first buildings you’ll see in the city center. The second is in the Old City, on the main street (Saborna St), between the Ethnographic Museum and the lovely church of Saint Konstantin and Elena.

More than 200 archaeological sites are located in the city, with 30 of them being of national significance. Many antiquity remains — Plovdiv is one of the rare towns with two antique theatres; medieval wall and tower ruins; Ottoman baths and mosques; and a well-preserved old neighborhood from the National Revival period with lovely buildings, churches, and small paved lanes. There are a plethora of museums, art galleries, and cultural organizations to choose from. Musical, theatrical, and cinematic events are held in Plovdiv.

The city serves as a jumping-off point for excursions to nearby attractions such as the Bachkovo Monastery 30 km (19 mi) to the south, the ski resort Pamporovo 90 km (56 mi) to the south, and the spa resorts Hisarya, Banya, Krasnovo, and Strelcha to the north.

Tourist information centers may provide you with a variety of services, such as city maps, concert information, bus and rail timetables, and assistance in locating a place to stay.

Plovdiv has a humid subtropical climate influenced by humid continental air. There are four different seasons, with considerable temperature swings between them.

Summer (mid May to late September) is hot, dry, and sunny, with a maximum average temperature of 31 °C (88 °F) in July and August. Plovdiv sometimes sees very hot days, which are common in the country’s interior. Summer evenings are pleasant.

Autumn begins in late September, and the days are long and generally mild. By September, the evenings had become cold. On average, the first frost comes in November.

Spring comes in March, however it is a colder season than fall. The frost season usually ends in March or April. In mid-spring, the days are moderate and reasonably warm.

Gentle breezes (0 to 5 m/s) dominate the city, with wind speeds of up to 1 m/s accounting for 95 percent of all winds throughout the year. Mists are widespread throughout the colder months, particularly near the Maritsa’s banks. During the year, there are 33 days with mist on average.

Plovdiv is located on the Maritsa River, southeast of Sofia, Bulgaria’s capital. The city is located in the southern section of the Plain of Plovdiv, which is an alluvial plain that forms the western component of the Upper Thracian Plain. The Sredna Gora heights rise to the northwest, the Chirpan Heights rise to the east, and the Rhodope mountains encircle the plain from the south. The city had initially formed to the south of Maritsa, and had only recently extended over the river. Plovdiv is about 101 km2 (39 sq mi) in size, accounting for less than 0.1 percent of Bulgaria’s entire land area. Plovdiv has the highest population density in the nation, with 3,769 people per square kilometer.

Plovdiv, located in the heart of a fertile agricultural area, has grown as an industrial hub since the early twentieth century. The mainstays of the industry were food processing, tobacco, brewing, and textiles. During Communist administration, the city’s economy increased significantly and was dominated by heavy industry; it still produces lead and zinc, as well as equipment, electronics, motor vehicles, chemicals, and cosmetics. A number of industrial complexes were shuttered after the fall of Communism in 1989 and the breakdown of Bulgaria’s planned economy.

Plovdiv is one of the fastest-growing economies in the nation, with an average GDP growth rate of 12–13 percent. Total sales in 2005 were 9.4 billion leva (about 4.8 billion euro), an increase of 88 percent over 2001. Profits increased 4.5 times within the same time span. The unemployment rate is 6.5%, which is lower than the national average. One recent issue has been the municipality’s administrative boundaries, which nearly entirely overlap with the city limits. Due to the continual expansion in investments, which totaled $465,000,000 in 2005, some firms have been transferred to Maritsa or Rodopi municipalities, such as the Radinovo village industrial zone.

Since the late 1990s, industry has been increasing again, with industrial factories established in the city or on its outskirts, mostly in the municipality of Maritsa. During this time, around €500,000,000 has been spent in the development of new industries. The Liebherr refrigerator plant, with 1,850 employees and a capacity of 450,000 items per year, the Socotab tobacco processing plant (2,000 employees), a bicycle plant (500 workers and a capacity of 500,000 units), a Schneider electronics factory, a biodiesel plant, the Bulsaphil textile plant (790 workers), and several electronics and high-tech plants producing CD players and other electronic equipment are among the new plants. In the adjacent town of Voivodinovo, the biggest electronics facility in the Balkans was launched.

The business sector is rapidly expanding. Shopping malls have mostly been constructed in the Central District and the Trakiya District. Shopping Center Grand, Market Center, and two more on Kapitan Raycho Street, Forum in Trakiya, Excelsior, and others are among them. Several malls are under development, including the €40 million Mall of Plovdiv, which will have a retail space of 40,000 m2 (430,556.42 sq ft), 11 theaters, and parking for 700 automobiles. Central Mall Markovo tepe, a massive €60 million mall and hotel complex in Trakiya, as well as a number of other projects planned or under development.

Plovdiv also features the Galeria Mall, which offers a free 1350-car parking lot, 100 stores, coffee shops, an ice skating rink, a 6 storey indoor climbing wall, and other attractions (bowling and arcade center). The mall is 6 floors tall and has a total area of 127 000 square meters, half of which is a parking lot and the rest is a retail area, making it one of the biggest in the Balkans. Carefur, Zora, Multirama, Paolo Botticelli, Adidas, Cult, Aqua, Rivas, Roberto Zago, Swatch, DM, Lustro, Fabiano, Denix, Colette, and many more well-known brand shops can be found there.

Several hypermarkets, mostly on the outskirts of the city, have been constructed: Metro, Kaufland, Triumf, Praktiker, Billa, Mr. Bricolage, Baumax, Technopolis, Technomarket Europa, and others. The center street, with its stores, cafés, and restaurants, is the primary shopping district. The Old Town and the narrow lanes in the center, known among locals as “The Trap” (Bulgarian: аана), include a variety of cafés, handicraft workshops, and souvenir stores.

Since 1987, the city has enjoyed a duty-free zone. It features a customs facility that handles truck and rail freight.