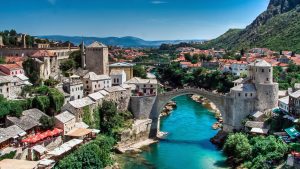 Bosnian, Serbian, and Croatian are the official languages of Bosnia and Herzegovina; all three are known as Serbo-Croatian since they are almost identical. Serbo-Croatian is written in both Latin and Cyrillic characters, making it the only Slavic language to do so. Signs in the Republika Srpska are in Cyrillic, therefore a Serbian-English dictionary would be useful.

Serbo-Croatian dialects vary only in the most scholarly of settings, as well as in traditional households. There are many dialects of the language spoken across the region, and spoken language varies by location. The language distinctions, however, are mainly superficial and do not impede dialogue between Orthodox Serbs, Catholic Croats, and Bosnian Muslims.

Because of familial ties and tourism in former Yugoslavia before to the conflict, many Bosnians know English as well as German. Some elderly individuals can also communicate in Russian since it was taught in schools during the Soviet period.