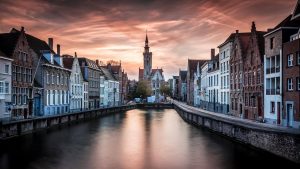 With the exception of certain areas in the centre of Brussels and the outskirts of Antwerp (the port and the docks), Belgium is a safe country. Belgians are somewhat shy and introverted, but generally helpful towards foreigners.

For those who end up in Charleroi and Liège, these are the regions with the highest crime rates in southern Belgium. But if you watch your stuff and avoid walking alone at night, nothing really serious will happen to you.

There can be mild resentment among Muslims and people of North African origin, a problem that is particularly acute in Brussels and Antwerp. The burqa is banned in public.

The marijuana laws are quite lenient, small amounts are only punishable by fines.

The emergency number in Belgium (fire brigade, police, ambulance) is 112.

In winter, as in most other European countries, only the flu will cause you considerable inconvenience. No vaccination is required to enter or leave Belgium.

By plane Brussels Airport (also known as Zaventem because of the city where it is mainly located) is the main airport in Belgium (IATA: BRU). It is not located in Brussels itself, but in the surrounding area of Flanders. The airport is the base of the national carrier Brussels Airlines....

Belgium is a member of the Schengen Agreement. There are normally no border controls between the countries that have signed and implemented the treaty. This includes most countries of the European Union and a few other countries.Before boarding an international flight or ship, there is usually an identity check. Sometimes...

Regions in Belgium Belgium consists of three regions, listed from north to south: FlandersThe Dutch-speaking region in the north of the country. It includes well-known cities such as Antwerp, Ghent and Bruges.BrusselsThe bilingual region of the country's capital and seat of the EU.WalloniaThe French-speaking region in the south, which includes a...

Budget Couchsurfing. has many members in BelgiumVriendenop challenges. If you are cycling or walking in Flanders, there is a list of 260 addresses where you can stay in private accommodation with bed and breakfast for a maximum of € 18.50 per person per night, but you also have to pay...

Food in Belgium Belgians love to eat. Belgium is famous for its good food and people like to go to restaurants frequently. The best description of Belgian food would be "French food in a German crowd". General rules Like everywhere else in the world, you should avoid tourist traps where thugs try...

Currency Belgium uses the euro. It is one of the many European countries that use this common currency. All euro banknotes and coins are legal tender in all countries. One euro is divided into 100 cents. The official symbol of the euro is € and its ISO code is EUR. There is...

Belgium has a modern phone system with nationwide mobile phone coverage and several internet access points in all cities, which are free in most libraries. Wi-Fi is also available in many petrol stations, NMBS stations and motorway service stations. Nowadays, many cafés offer free Wi-Fi but for some reason don't...

Belgium is the heir to several ancient medieval powers, and you will see traces of them everywhere as you travel through this country. After the collapse of the Carolingian Empire in the 9th century, the area that today makes up Belgium, the Netherlands and Luxembourg was part of Lotharingia, a...