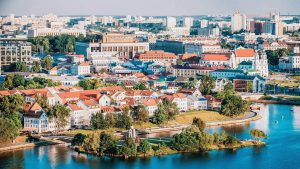 From 5000 to 2000 BC, Bandkeramik cultures predominated. In addition, remains from the Dnieper-Donets culture were found in Belarus and parts of Ukraine. Cimmerians and other pastoralists roamed through the area by 1,000 BC, and by 500 AD, Slavs had taken up residence, which was circumscribed by the Scythians who roamed its outskirts. Invaders from Asia, among whom were the Huns and Avars, swept through c. 400–600 AD, but were unable to dislodge the Slavic presence.

The region that is now Belarus was first settled by Baltic tribes in the 3rd century. Around the 5th century, the area was taken over by Slavic tribes. The takeover was partially due to the lack of military coordination of the Balts but the gradual assimilation of the Balts into Slavic culture was peaceful in nature.

The area of current Belarus became part of Kievan Rus’, a large East Slavic kingdom controlled by the Rurikid dynasty, in the 9th century. Following the death of Kievan Rus ruler Yaroslav I the Wise, the kingdom was divided into separate principalities.

A massive Mongol invasion in the 13th century completely destroyed or seriously harmed several early Russian kingdoms, but the territories of Belarus escaped the brunt of the invasion and were ultimately absorbed by the Grand Duchy of Lithuania.

When the Grand Duchy of Lithuania captured Polotsk and Navahrudak in 1250, it became the first to integrate Belarusian areas into its borders.

The incorporation of Belarusian territories into The Grand Duchy of Lithuania resulted in economic, political, and ethno-cultural unity. Nine of the Duchy’s principalities were inhabited by a population that would ultimately become Belarusians. During this period, the Duchy was engaged in numerous military operations, notably fighting with Poland against the Teutonic Knights in the Battle of Grunwald in 1410; the joint victory gave the Duchy control of Eastern Europe’s northern borders.

The Grand Duchy of Lithuania and the Kingdom of Poland were united in a personal union on February 2, 1386, when their monarchs married. This marriage put in action the events that led to the establishment of the Polish–Lithuanian Commonwealth in 1569. Polish supplanted Belarusian as the official language in 1696, and Belarusian was banned.

In 1486, the Muscovites, headed by Ivan III of Moscow, launched military operations in an effort to annex the lands of Kievan Rus’, particularly the regions of Belarus, Russia, and Ukraine.

Within the Russian Empire

The union of Poland and Lithuania dissolved in 1795, when Imperial Russia, Prussia, and Austria partitioned Poland. During this period, the Russian Empire gained the lands of Belarus during Catherine II’s reign and held them until their conquest by the German Empire during World War I.

Although national cultures were suppressed under Nicholas I and Alexander III owing to de-Polonization and Russification efforts, which included the return to Orthodoxy, the 19th century saw the development of the modern Belarusian nation and self-confidence.

Belarus proclaimed independence under German occupation on March 25, 1918, during the Treaty of Brest-Litovsk talks, establishing the Belarusian People’s Republic.

Immediately after, the Polish–Soviet War erupted, and Belarus was partitioned between Poland and Soviet Russia.

Agricultural reforms were initiated in the 1920s, culminating in the Belarusian phase of Soviet collectivization. The execution of the Soviet five-year plans for the national economy in the 1930s resulted in fast industrialisation.

The invasion and occupation of Poland by Nazi Germany and the Soviet Union in 1939 marked the start of World War II. Much of northeastern Poland, which had been a part of the nation since the Treaty of Riga two decades before, was seized by the Byelorussian SSR and is now part of West Belarus. On October 28, 1939, at Biaystok, the Soviet-controlled Byelorussian People’s Council formally seized control of the regions, whose inhabitants were a mix of Poles, Ukrainians, Belarusians, and Jews. In 1941, Nazi Germany attacked the Soviet Union. The Brest Fortress, which had been seized in 1939, was subjected to one of the most devastating onslaughts of the war at this time. Statistically, the Byelorussian SSR was the worst-affected Soviet republic during WWII, remaining in Nazi control until 1944. During that period, Germany destroyed 209 of the republic’s 290 cities, 85 percent of the republic’s industry, and almost one million structures.

The number of casualties was believed to be between 2 and 3 million (about a quarter to one-third of the entire population), while the Jewish community of Belarus was decimated and never recovered. Belarus’s population did not recover to pre-war levels until 1971. Stalin also established the ultimate boundaries of Belarus following this war, when portions of Belarusian land were handed to the newly acquired Lithuania.

Belarus was one of the 51 founding nations of the United Nations Charter after the war, and as such, it was granted an extra vote at the UN in addition to the Soviet Union’s vote. Following the conclusion of the war, vigorous postwar rebuilding began, and the Byelorussian SSR quickly became a significant center of industry in western USSR, generating employment and recruiting ethnic Russians. The Byelorussian SSR and Poland’s boundaries were revised, and this became known as the Curzon Line.

To isolate the Byelorussian SSR from Western influences, Joseph Stalin launched a Sovietization program. This strategy included sending Russians from different areas of the Soviet Union and putting them in important positions in the administration of the Byelorussian SSR. Moscow restricted the official usage of the Belarusian language and other cultural elements. Following Stalin’s death in 1953, Nikita Khrushchev carried on his predecessor’s cultural hegemony campaign, declaring, “The sooner we all start learning Russian, the quicker we will establish communism.”

The Byelorussian SSR was exposed to substantial radioactive fallout from the Chernobyl power plant accident in the adjacent Ukrainian SSR in 1986.

Archaeologist and BPFZyanon Christian Conservative Party chairman Paznyak found mass graves of people murdered in 1937–41 in Kurapaty, near Minsk, in June 1988. Some nationalists argue that this finding proves the Soviet government’s attempt to eliminate the Belarusian people, which prompted Belarusian nationalists to seek independence.

Elections for seats in the Supreme Soviet of the Byelorussian SSR were held in March 1990. Despite the fact that the pro-independence Belarusian Popular Front received just 10% of the seats, the public was pleased with the delegates chosen. On July 27, 1990, Belarus proclaimed itself independent by releasing the Declaration of State Sovereignty of the Belarusian Soviet Socialist Republic.

On August 25, 1991, the country’s name was changed to the Republic of Belarus with the approval of the Communist Party. On December 8, 1991, Stanislav Shushkevich, the chairman of Belarus’ Supreme Soviet, met with Boris Yeltsin of Russia and Leonid Kravchuk of Ukraine at Belavezhskaya Pushcha to officially proclaim the breakup of the Soviet Union and the establishment of the Commonwealth of Independent States.

Under March 1994, the President of Belarus was granted the duties of prime minister in a national constitution.

Two-round presidential elections on (24 June and 10 July 1994) propelled the hitherto unknown Alexander Lukashenko into national prominence. He won 45% of the vote in the first round and 80% in the second round, beating Vyacheslav Kebich, who received 14% of the vote. Lukashenko was re-elected president in 2001, 2006, 2010, and 2015. Western countries, Amnesty International, and Human Rights Watch have all condemned Lukashenko’s autocratic leadership style.