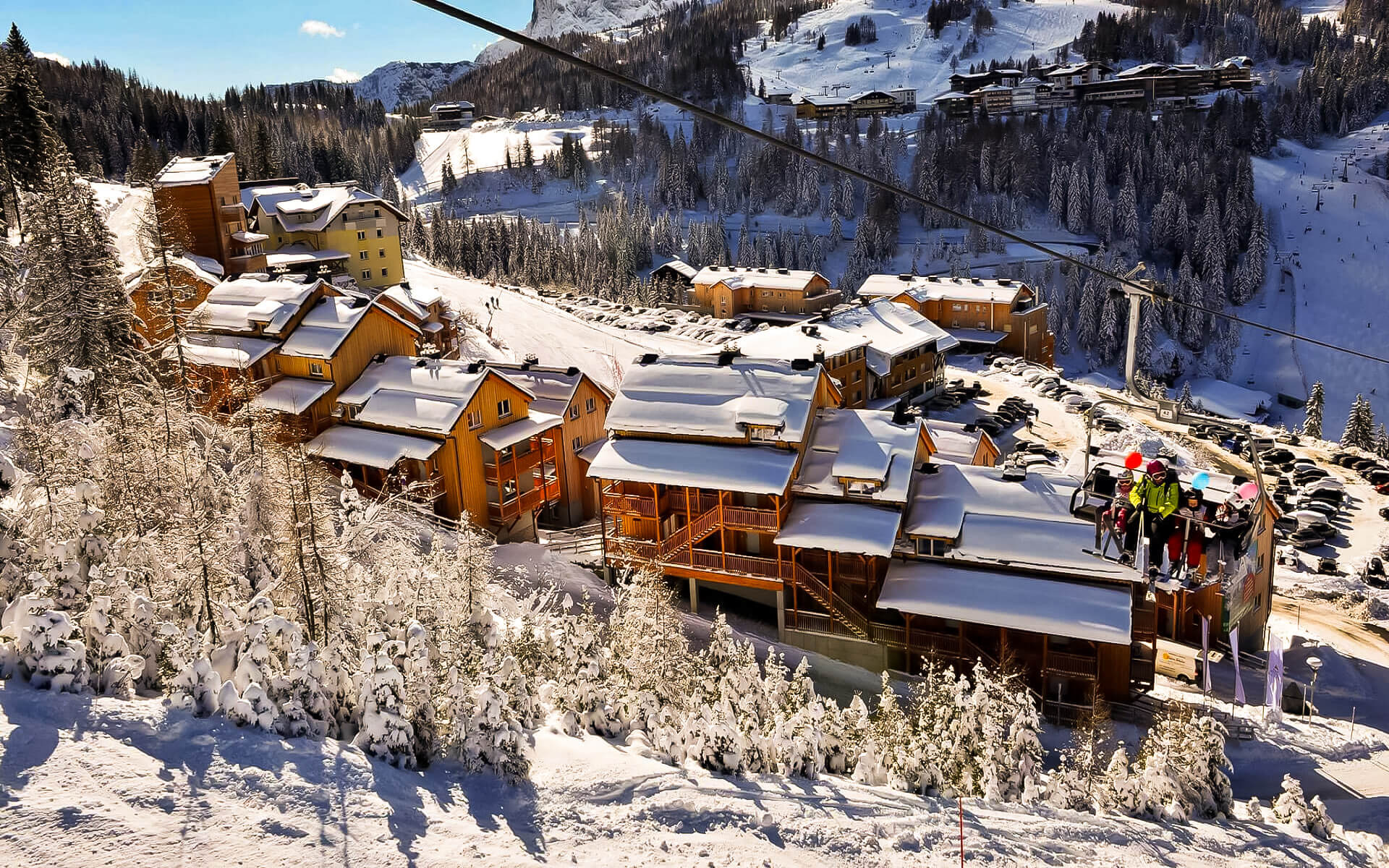 Nassfeld or Naßfeld is a village and ski resort in the Austrian state of Carinthia’s district Hermagor, close to the Italian and Slovenian borders.

Nassfeld is a prominent winter and summer sports resort with over 1000 km of hiking trails and provides skiing, snowboarding, cross-country skiing, and mountain hiking. There are 30 ski lifts in the region, including five gondolas, four six-seater chairlifts, four four-seater chairlifts, and 17 tow lifts. The ski resort includes around 220 artificial snow machines and 110 kilometers of ski trails. In less than 15 minutes, the Millennium-Express cable car can transport visitors to the peak, which is 1919 meters high. The ski resort is situated between 600 and 2000 meters above sea level. Carnia, with a length of 7.6 kilometers, is one of Carinthia’s longest runs. The weather in these places varies greatly, although it is often bright and hot throughout the summer months (5-15 degrees Celsius)

Nassfeld may not yet be a household name among skiers outside of Austria, but it is in every other way. Because its name is connected with lots of superlatives, its lack of visibility is more due to a lack of devoted worldwide marketing than any inadequacies on the side of the resort.

It is the largest resort in the Carinthia region, Austria’s most southern ski resort, and the site of the world’s longest gondola ski lift (the 4-mile, 3-stage Millennium Express). It also features a stretch of the seven-mile Carnia run that is the longest floodlit run in the Alps.

However, although little-known outside of the nation, the home narrative is much different. Nassfeld has risen to the top ten Austrian ski resorts thanks to significant investment in recent years. If its quick growth and expansion are any indication, it will continue to rise up the ranks.

Nassfeld is more of a cluster of communities than a distinct entity, both on the mountain and in the valley. Sonnenalpe or Sonnleitn are the best choices for ski-in, ski-out convenience. Tropolach, a delightful small town at the Millennium Express’s bottom station, may alternatively be described as ski-in ski-out.

They all offer basic shopping – ski apparel and rental stores, pubs and restaurants – but they aren’t large settlements. However, the hotels provide all you need for a ski vacation, including superb amenities, spas, restaurants, and pubs.

The closest town is Hermagor, which has a shuttle bus service to the slopes and is named after St Hermagoras, a Roman bishop who fell foul of Emperor Nero and was tortured and killed (his monument is in the town).

Villach, the next big town, has a lot of shopping, restaurants, and nightlife.

With 110 kilometers of slope, the ski resort Nassfeld provides everything a winter sports aficionado could want. With 69 red-marked slopes, skilled skiers have a wide variety of options. There is adequate terrain for beginners and specialists with 30 kilometers (18.6 miles) of blue designated trails and eleven kilometers (6.8 miles) of black marked pistes.

Nassfeld has also just built the Millennium-Express, the longest gondola lift in the Alps, to its resort. Nassfeld offers a variety of ski school practice fields and children’s places for their first ski tries. The Tressdorfer Alm’s BOBO’s Mini Club “All-in-one” is a kindergarten for children aged three and above. Professional personnel will look after your children while you explore the Nassfeld ski resort on your own.

Snowboarders will discover a fantastic and thrilling terrain park with a fun-cross course at the Gartnerkofel. A rails portion with a Beginners Line, Jib Line, and Pro Line is also available. There are snowboard and freeski workshops on Sundays. The greatest thing is that you don’t even have to register; just drop by and participate in the fun!

In Nassfeld’s “Schneeloch,” freeriders have their own unique terrain with specially defined freeride sections. One-of-a-kind deep snow slopes with superb powder snow may be found here. For ski touring enthusiasts, there are a variety of trips to choose from, each with a distinct degree of difficulty. For example, the tough Rosskofel-Tour begins at the base of the peak Rosskofel. The Millennium-Express may take you to the starting location. The remainder of the excursion will take you past the Rosskofel rock massif, which offers a spectacular perspective and is well worth viewing.

The vast nursery slopes of Tressdorfer Alm, near the top of the Millennium Express gondola, or the Sonnenalpe beginning slopes are ideal for beginners.

This is an excellent region for intermediates, featuring a variety of blue and red courses on which to hone your skills. Relaxed intermediates will enjoy the blue and red slopes that go down to Sonnenalpe Nassfeld from the top of the main gondola, while those seeking a more challenge will like the pistes in Gartnerkofel and Watschiger Alm.

There aren’t many pisted slopes at Nassfeld that will provide a serious challenge for experienced skiers – the Trogkofelbfahrt is the only marked black run, and the bulk of the lines are red. However, there are a variety of off-piste ski trails that can be accessed from higher slopes. If you want to attempt touring, it’s recommended obtaining a guide to keep safe and discover the freshest powder.

Skiing on a cross-country course

There are a variety of cross-country skiing tracks in and around the resort, with varied heights (between 600m and 1500m) and difficulty levels. Nassfeld-Pressegger See (Tröpolach, Rattendorf, Nassfeld) is one of Austria’s major cross-country centers, with multiple routes stretching into Italy and winding through snow-covered woods and past breathtaking views. A Nordic Competence Centre featuring biathlon is offered for visitors, as well as equipment to rent and a ski school to assist with practice.

Nassfeld and the surrounding mountains are a sanctuary for powder junkies looking to sharpen their talents. Many of the courses are accessible by lift, but if you want to go higher, you may walk up the mountains before skiing down. There are long slopes, tree skiing, and cliff drops to be found here. The Lesachtal Valley is one of the greatest places to travel since the snow is mostly pristine and uncrowded. There are seven popular routes that demand a steep approach but reward you with deserted descents with vertical drops of up to 4,000 feet.

Nassfeld’s 110 kilometers of pistes are in excellent shape all year, since it is one of Austria’s top ten ski resorts. Each winter, the Carnic Alps are blanketed with snow due to a particular microclimate in the area. Every night, our 17 piste bashers (three of whom are equipped with cutting-edge GPS equipment to assess snow depth) are out and about prepping the slopes for the following day.