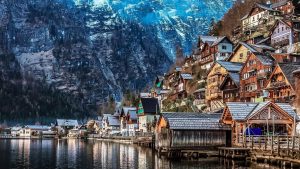 Austria uses the euro. It is one of the many European countries that use this common currency. All euro banknotes and coins are legal tender in all countries.

The best rates for exchanging money are offered by banks.

The old currency, the schilling, can still be exchanged for euros without limit, but not all banks can offer this service.

Prices are comparable to those in Western European countries and slightly higher than in the United States. General sales tax of 20 % is included in the prices, but lower sales taxes apply to certain services and especially food. A can of Coke costs about 55 cents, a good meal 15 euros. Prices in tourist areas (Tyrol, Vienna, Salzburg, Zell am See) are far above average. B&Bs and restaurants in cities and in the countryside are quite cheap.

Shops are generally open from 8am to 7pm on weekdays and 8am to 6pm on Saturdays and closed on Sundays, except for (expensive) petrol station shops, train station shops and restaurants. Especially in rural areas, small shops may close around noon on Saturdays. Some may also be closed on weekdays between 12pm and 3pm. Be aware that paying by credit card is not as common as in the rest of Europe or the United States, but all major credit cards (Visa, MasterCard, American Express, Diners Club) are accepted at almost all petrol stations and in department stores, especially in shopping centres. In small towns and villages there are usually one or two small shops or bakeries offering almost everything, called “Greißler”, although they are threatened by large shopping centres.

In Austria, ATMs are called Bankomat. They are widespread and you can even find them in small rural villages. Many shops (and also some restaurants) offer the service of paying directly with a debit card. The majority of ATMs accept cards from abroad. All ATMs in Austria are easily recognisable by a sign with a green stripe above a blue stripe. There are usually no fees, but Euronet charges €1.90 per withdrawal.

In Austria, tipping is common and, although not required by law, is often considered socially obligatory. It is customary to give 5-10% of the total amount; a higher figure indicates exceptionally good service. Rounding to multiples of one euro is common; small amounts are often paid in multiples of 50 cents (i.e. a bill of 7.80 may be paid as 8 or 8.50).

Tipping is not done when goods are exchanged at the counter (e.g. in fast food shops or street stalls). Traditionally, the owner of a restaurant does not receive a tip. Tipping is known in German as Trinkgeld, which literally means “money for a drink”. It is also customary to tip other service providers, such as taxi drivers or hairdressers. Attempting to tip a government employee can be construed as bribery and will get you into trouble.

Bargaining is not common in Austria, except at flea markets. It may be acceptable to ask for a reduction but accept a refusal as an answer.

Which gifts should be taken home?