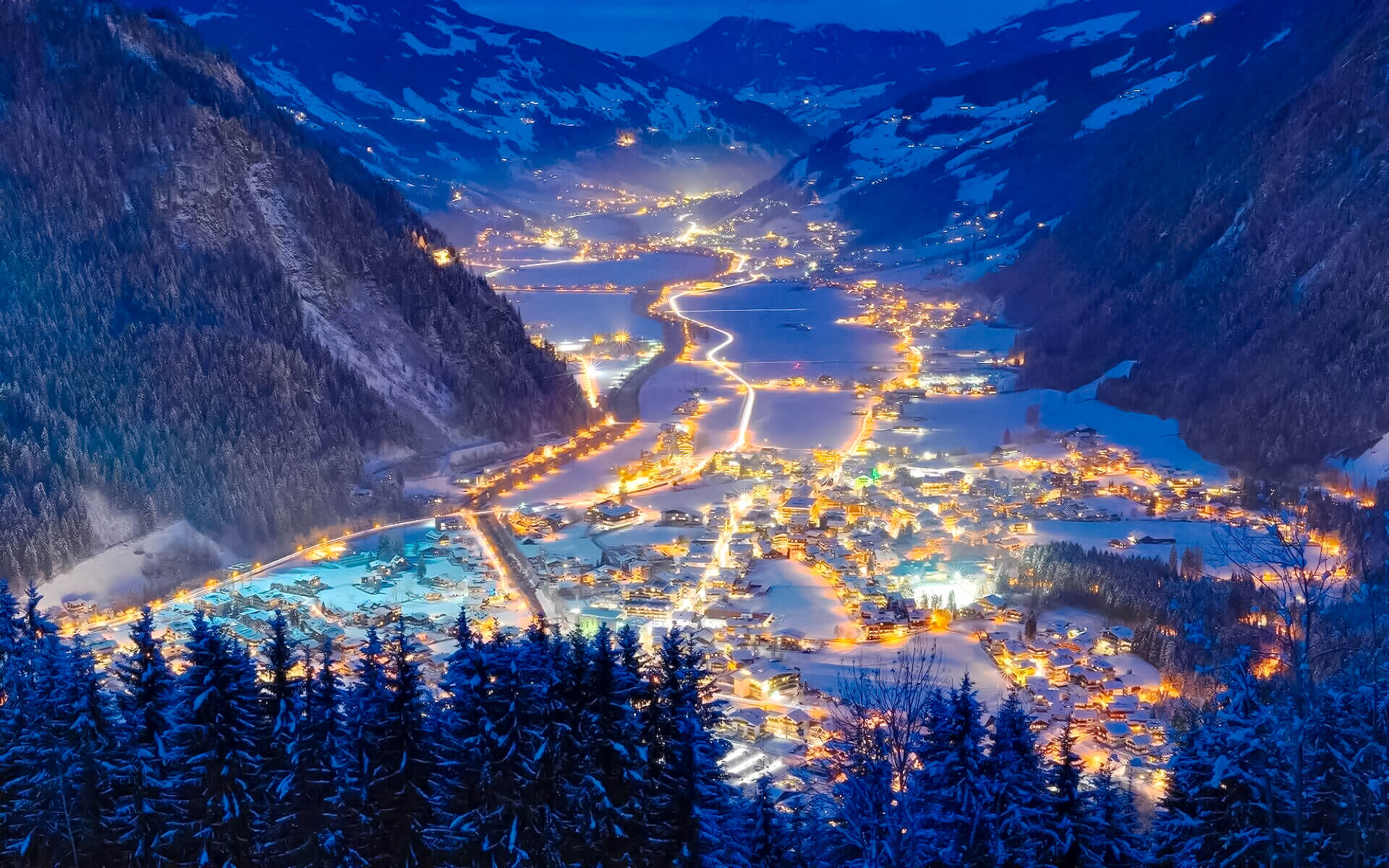 Mayrhofen, located in the magnificent Ziller Valley, has long been regarded as one of the world’s best ski and snowboard resorts, nestled in the extensive Zillertal region.

Mayrhofen is one of the most diversified Alpine resorts, with 57 lifts, 136km of skiing, and Austria’s steepest line, Harakiri, located at the foot of the Penken and Ahorn mountains. Because all of the slopes are accessible by gondola, novices will need a complete lift pass from the start, even though the ski schools are excellent and the variety of simpler routes allows for rapid advancement. Mayrhofen offers a diverse range of more difficult lines, as well as some outstanding off-piste in the correct circumstances. You get to wear the “I survived Harakiri” t-shirt and enjoy your 5 minutes of fame at a free picture session every Friday if you beat the 38-degree gradient of Harakiri. Vans Penken Park is also one of Europe’s most popular freestyle parks. But don’t worry if you’re a newbie; the Kids Park part will allow you to perfect your talents.

Mayrhofen, located three hours from Munich airport and an hour or so from Innsbruck, has a long history as one of Austria’s most important teaching destinations. It also has a strong snow record, and its altitude neighbor, Hintertux, ensures snow all year. The merged regions are promoted as Ski and Glacier World Zillertal 3000 and are covered by the Zillertal Superskipass, despite the fact that they are not connected.

Hintertux has an equally solid reputation as an enduringly reliable location for summer skiing (especially in an age of diminishing glaciers), which is a godsend for national ski teams eager to maintain their skills without having to waste valuable time traveling to mountain ranges in the southern hemisphere. Summer snowboard camps in Hintertux also draw snowboarders.

Mayrhofen’s apres-ski and nightlife can be rather vibrant for those with enough energy to party and ski. At the same time, the resort is known for providing a warm welcome to young families.

Welcome to a skier’s, snowboarder’s, and party-dream goer’s come true. Super contemporary lifts, fantastic piste skiing, entertaining and demanding off-piste, access to massive linked resorts up and down the valley, as well as fantastic après and nightlife On so many levels, the Mayrhofen ski resort offers.

Penken, Ahorn, Finkenberg, Rastkogel, and Eggalm are the names of five separate places on the Mayrhofen skiing and snowboarding terrain. Except for Ahorn, which lies alone in the valley, they are all lift connected. The terrain is suitable for all levels, and it extends over a large area and in all directions (sun and shadow).

Mayrhofen has recently invested considerably in a number of new lifts, resulting in exceptionally efficient uphill transportation. A series of contemporary chairs, including a hybrid chair/gondola (funnily enough dubbed the Kombibahn), carry you quickly to the good stuff from the massive Ahorn cable car and Penken gondola that depart immediately from town. Around the summit of Penkenbahn, many surface tows and conveyors serve beginning regions.

With the exception of ski route 30 down to Hippach and piste trail 5 towards Mayrhofen, all piste trails and off-piste terrain are located close or above the tree line. With approximately 1300m of skiable vertical and a northerly aspect, Ahorn’s piste track 5 is very exciting top to bottom skiing. Those looking for powder will find a large off piste in the days after new snow. There are some difficult steeps and vast open alpine bowls, but if the snow is thick and low, there are numerous possibilities to freeride the meadows and trees down into the valleys. Barb wire fences should be avoided!

Mayrhofen is a good place to snowboard (not too many flat places). The terrain park beside the SunJet chair will appeal to park aficionados.

Nearly a third of Mayrhofen’s slopes are deemed beginner-friendly, and the majority get sufficient skiing sunlight.

The bulk of the simple slopes in the Penken region enjoy lots of sun, which is always a plus for beginners, and Mayrhofen boasts that about a third of its slopes are suited for beginners, totaling 45 kilometers (28 miles). It also claims that the 90 kilometers (55 miles) of red runs are well-prepared enough for novices to ski on. This is perhaps a touch overconfident.

Mayrhofen is a traditional intermediate ski area with wide, open slopes that descend from above the treeline.

With enormous, wide, sweeping, above-the-treeline pistes scattered throughout the major Penken slopes – plus a plethora of skiing for those willing to spend in the Zillertaller Superski Pass – Mayrhofen truly comes into its own as a traditional intermediate ski destination. Despite the steepness of the hills, even the most hesitant intermediate will have plenty of time to prepare for that crucial turn. On the Tuxer Glacier, intermediates may also enjoy several simple yet steep routes.

Mayrhofen has a lot of off-piste possibilities, including two undeveloped but well-marked ski slopes.

There is plenty of off-piste potential, however the resort is quick to warn skiers and boarders that going off-piste is at their own risk in these litigious times. There are also two unmarked “Ski Routes,” one from the Penken to the bottom station of the Horberg cable car in Schwendau, 3 km (2 miles) from Mayrhofen, and the other from the Rastkogel to the Eggalm. These are only used if there is enough snow on the ground.

The Harakiri, located near the Knorren lift, is advertised as “Austria’s steepest ski slope” and is one of Mayrhofen’s most popular black lines. Another thrilling black run is the ‘Devil’s Run’ under the Schneekar lift on the Schafskopf. There are 22 kilometers of black runs in all. The resort’s longest run, the 5.5 km Ebenwald piste down the Ahorn, is described as “the longest artificially snow-covered valley downhill run in the Zillertal,” descending nearly 2,000 meters to the valley floor – a challenging vertical descent of 1,335 meters that provides some much-needed excitement to revive interest in the Ahorn area, which has lost much of its original appeal – partly due to the effort required to get there.

The Burton Funpark in Mayrhofen, which is one of the most popular in the Alps, has just been expanded.

Mayrhofen has held many important snowboarding contests in recent years, notably the British Snowboarding Championships. The Burton Funpark in Mayrhofen, one of the most popular in the Alps, has recently been expanded to include additional features for both skiers and snowboarders. There are three separate lines (pro line, medium line, and beginner line) as well as a halfpipe and rails that are formed on a daily basis. There are several new little jumps and rails on the beginner line, as well as a banked slalom. Hintertux is a popular summer destination. Boarders may participate in a summer glacier camp on the adjacent Tuxer Glacier beginning in May each year.

Mayrhofen may have been a victim of Mother Nature’s fickle nature in recent years – exacerbated by its low base elevation – but the resort has invested substantially in snowmaking to compensate for any natural deficits in the lower areas. Fortunately, the majority of the actual terrain is above 1500 meters, and when Mother Nature offers natural snow, Mayrhofen delivers promptly with its alpine meadow terrain.

Mayrhofen offers a variety of lodging options. From 5-star luxury hotels to inexpensive guesthouses, Mayrhofen even has an Igloo at the White Lounge on Ahorn where you may spend the night. It’s always enjoyable to stay in the center of town because it gives you convenient access to the lifts. Quality lodging close outside of Mayrhofen, on the other hand, may appeal to some.

Mayrhofen is a full-service ski resort that also happens to be a large city. Restaurants on the hills are great. The Gschösswandhaus is a favorite among the locals. It’s no longer a secret!

There are more ski rental and gear stores, ski schools, instructors, and guides in the ski region than you can count. Compare prices to get the best deal.

The Penken top station in Mayrhofen features some of the greatest and most intellectually taxing male restrooms in the Alps — evidently the builders had a sense of fun. People stepping outdoors in front of the urinals may be seen via the one-way glass. Check out the mind vs. matter challenge and see if you can beat it.

Mayrhofen’s unique ‘Snow Limo’ trips for individuals unable (or unwilling) to ski are also worth highlighting. The participants are transported down the Ahorn pistes in a sit-ski limo. My mother would have jumped at the opportunity. The same goes with paragliding!

Apres-ski, restaurants and other activities in Mayrhofen

Numerous pubs and clubs stay open till the wee hours of the morning. Bruck n Stadl, Ice Bar, Scotland Yard Pub, Strass Sports Lounge, and Harakiri are some of the best pubs in town. Don’t forget about Snowbombing, the iconic end-of-season bash. Step inside the igloo to observe the amazing ice sculptures or relax on a deckchair outdoors in the sunlight at the White Lounge igloo bar on the Ahorn mountain.

Mayrhofen’s advent season spans from the 16th to the 18th of December and includes a typical Christmas market as well as a plethora of lovely decorations. It’s great for families, and kids will like the petting zoo.

Other Activities at Mayrhofen

If you’ve worn out your skis or snowboard, or if you’re traveling with non-skiers, Mayrhofen offers a variety of different sports.

Tandem paragliding from the top of Penken all the way down to Mayrhofen is the most enjoyable Mayrhofen activity.

Winter hikes, beautiful gondola and train excursions, or a trip to the breathtaking summit of Hintertux Glacier and a visit to the Ice Caves are all possibilities.