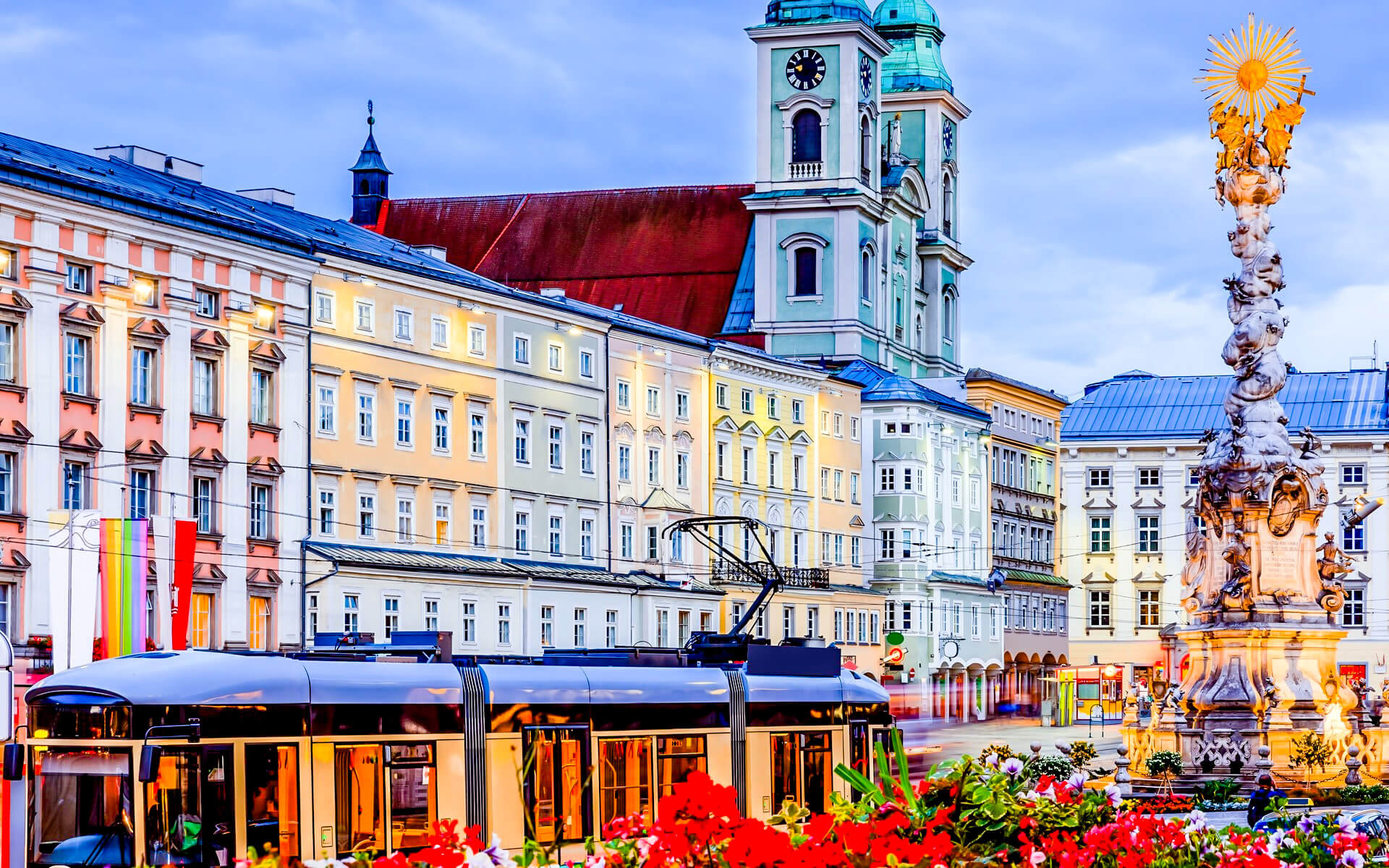 Linz is Austria’s third-largest city and the capital of Upper Austria (German: Oberösterreich). It’s in Austria’s north central region, around 30 kilometers (19 miles) south of the Czech border, on both banks of the Danube. The city has a population of 200,839 people, while the Greater Linz conurbation has a population of over 271,000 people.

Linz, together with Vilnius, Lithuania’s capital, was named European Capital of Culture in 2009. Linz has been a member of the UNESCO Creative Cities (UCCN) network as a City of Media Arts since December 1, 2014. Cities earn this distinction for enhancing urban life via the sponsorship and effective integration of media art, as well as integrating society in these electronic art forms. Linz is famous for the Linzer torte, which is considered to be the world’s oldest dessert, with a recipe going back to 1653.

Linz is a Danube-side industrial city (with massive steel and chemical plants) located halfway between Salzburg and Vienna. Linz was a Roman Empire frontier station in antiquity, and it had its ups and downs. It was a bustling town with crafts and trade in the Middle Ages, owing to its strategic position on the Danube River and the presence of one of the few permanent bridges. Then came the arrival of a well-known tyrant (Adolf Hitler), who was born two hours away in Braunau but grew up in Linz and selected the city to become the “Führerstadt.” Apart from a few buildings and the major bridge, he was primarily interested in the massive chemical and metal industries: what is now VOEST was the notorious “IG Farben,” and what is now the Chemiepark Linz was the “Hermann Göring Werke.”

The city was brutally attacked during World War II, and it was one of the few cities in Nazi Germany that survived utter devastation. The 1950s growth boosted the economy, but it also made Linz the city with the worst air quality in Austria. The prominence of industry decreased dramatically during the industrial transition in the late 1980s and early 1990s. What’s left is the image of a “steel city,” which Linz utilized.

As a result, Linz lacks a significant “Altstadt,” which may frustrate visitors who are used to the allure of Graz or Salzburg. Linz is predominantly a student and industrial town, and although not very attractive, it is more indicative of a “genuine” Austrian city than Salzburg, which has a fairy tale aspect.

Linz is more interested in its modern attractions, including as museums, architecture, and art. Because to its yearly Ars Electronica Festival, the city receives a lot of worldwide media attention. In September, it also hosts the “Klangwolke” (“sound-cloud”), a large cultural open-air event with contemporary and traditional music as well as a gigantic light display. In 2009, Linz was designated as the European Capital of Culture.

Linz has an oceanic climate, with continental airflows having a substantial impact. Summers are hot, and winters are very cold as a consequence.

Linz lies in the heart of Europe, on the west–east axis of Paris–Budapest and the north–south axis of Malmö–Trieste. The Danube is the city’s most important tourist and transportation corridor.

Linz is one of Austria’s major economic centers. The Voestalpine AG is a big steel company (established as the “Hermann-Göring-Werke” during WWII) that is well known for the LD- (“Linz-Donawitz”) steel-making technique. The erstwhile chemical group “Chemie Linz” has been divided into many entities. Linz has become one of Austria’s most significant economic centers because to these firms.

Linz employs almost 190,000 people, which is nearly twice as many as the city’s population. Linz has to cope with a lot of commuter traffic as a result. On a typical weekday, over 100,000 employed people travel to Linz and approximately 18,500 commute out of Linz.

Linz is also a desirable site for logistic and trade businesses since it is home to one of Austria’s four Donau-Harbors (Donauhäfen). However, industrial factories may be located along the shoreline, for example. Linz’s economic prominence has been built through centuries of commerce. Furthermore, National Socialism was responsible for Linz’s long-standing reputation as an industrial city. As a consequence, big industrial businesses have remained in Linz to this day. As previously indicated, Voestalpine AG and “Chemie Linz” are excellent instances of this. They represent a big number of employment and, of course, industry-related businesses from an economic standpoint.

Linz is the third most significant congress location in Austria, according to the Meeting Industry Report Austria (mira), with a share of 7,4 percent of all congresses, conferences, and seminars hosted in Austria. More than 60 conference and event venues can be found in Linz. The local tourist organization has created the Blue Meeting® concept, a conference format that focuses on individual participant requirements and conforms to the notion of green meetings, therefore encouraging waste avoidance, energy efficiency, climate-neutral travel, and regional added value.

Ptuj is a city on the Drava River in Eastern Slovenia. It is well-known for its ancient structures as well as the Kurentovanje festival. Ptuj...
Read more

Grand-Bassam is a town in the Ivory Coast’s south-eastern region, east of Abidjan. It served as the French colonial capital from 1893 until 1896,...
Read more

Singapore, also known as the Lion Metropolis, the Garden City, and the Red Dot, is a sovereign state and global city in Southeast Asia,...
Read more

Slovakia, formally known as the Slovak Republic (Slovak: Slovensko or Slovenská republika; both names are legally accepted) is a landlocked nation in Central Europe....
Read more