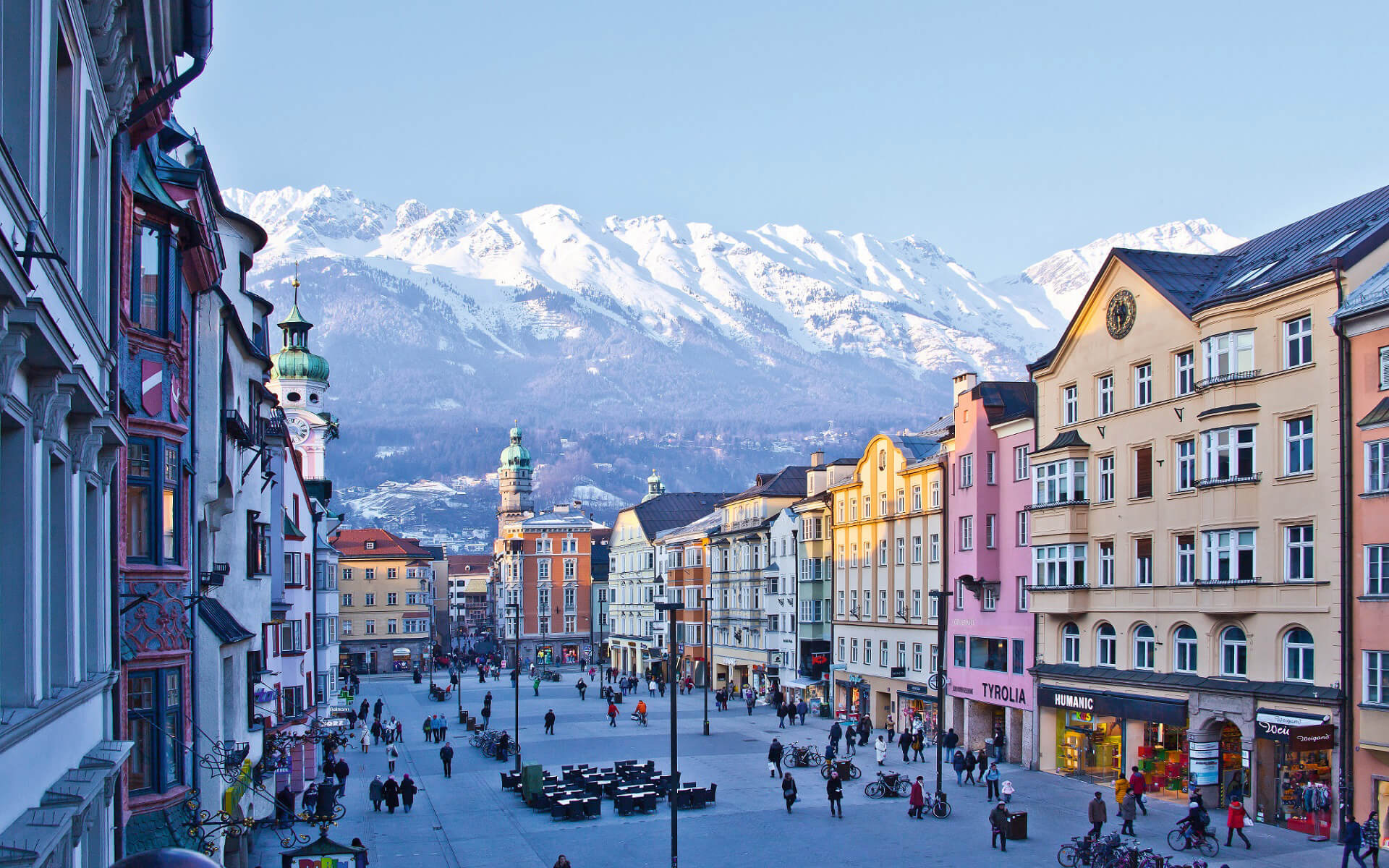 Innsbruck is the capital city of Tyrol, which is located in western Austria. It is situated in the Inn valley, at the intersection of the Wipp valley, which allows access to the Brenner Pass 30 kilometers (18.6 miles) to the south.

Innsbruck is a world-renowned winter sports destination, having hosted the Winter Olympics in 1964 and 1976, as well as the Winter Paralympics in 1984 and 1988. In 2012, Innsbruck also hosted the inaugural Winter Youth Olympics. The name literally translates to “Inn bridge.”

Innsbruck is Austria’s fifth-biggest city, the provincial capital of Tyrol, and one of the major cities in the Alps. It is a center of an area known for skiing and other mountain-related sports, as well as a bustling tourist attraction, located in a valley of the river Inn between mountain ranges of more than 2000 meters above sea level, midway between Bavaria and northern Italy. Its prominence as a winter sports destination was heightened by the fact that it hosted the Winter Olympics twice.

Innsbruck is a prominent tourist destination that hosts the following events each year:

Because it is located in the Alps and surrounded by mountains, the city is widely recognized for its sporting options, particularly alpine sports. Several ski resorts are located inside the city limits or within a short distance. Innsbruck was one of the epicenters of the snowboard boom in the 1990s, and the resulting unique subculture has persisted to this day. As a result, the number of skateboarders, snowboarders, and people in general is above normal and nothing out of the ordinary. This culture is also honored through a number of events in and around Innsbruck, particularly during the winter season, which draw (mostly young) people from all over the globe.

Innsbruck has two universities and many colleges, with over 25,000 students in total (including a sizable Italian community), making the city’s nightlife quite active.

Innsbruck, like the rest of Central Europe, has an oceanic climate with continental influences (particularly in winter) owing to its central location and proximity to hilly terrains, which results in higher yearly temperature fluctuations. The winters are very cold (much colder than most major European cities) and snowy. Winter evenings may be very cold, with temperatures as low as 12 °C (10 °F) on rare occasions.

Summer is a very fickle and unpredictable season. Days may be cold (17 °C) and wet, or bright and quite hot, with temperatures sometimes reaching 34 °C (93 °F). Summer diurnal temperature fluctuation is typically quite large, as predicted for an alpine-influenced climate, while evenings are generally chilly, averaging 12 °C (54 °F) on average but sometimes plunging as low as 6 °C (43 °F).

Innsbruck is the economic and cultural capital of western Austria. It is also a major tourist destination, with over a million overnight stays. Innsbruck is a university town, with various colleges and institutions located in the area.

There are around 78,000 people and 8,000 enterprises in Innsbruck. Every day, almost 35,000 people travel into Innsbruck from the neighboring municipalities. For the year 2012, the unemployment rate was 4.2 percent.

Quebec City is the capital of Quebec, a Canadian province. Quebec City’s Old Town, perched on cliffs overlooking the St. Lawrence Seaway, is a...
Read more

Montenegro (Montenegrin: Crna Gora ), Italian for “Black Mountain”, is a sovereign state located in Southeastern Europe. It borders Croatia on the west, Bosnia and...
Read more

Tromsø is a city and municipality in the county of Troms, Norway. The municipality’s administrative center is the city of Tromsø. Tromso and Tromsö...
Read more

Kiev is Ukraine’s capital and biggest city, situated on the Dnieper River in the country’s north center region. The population was 2,887,974 in July...
Read more
Tourist attractions