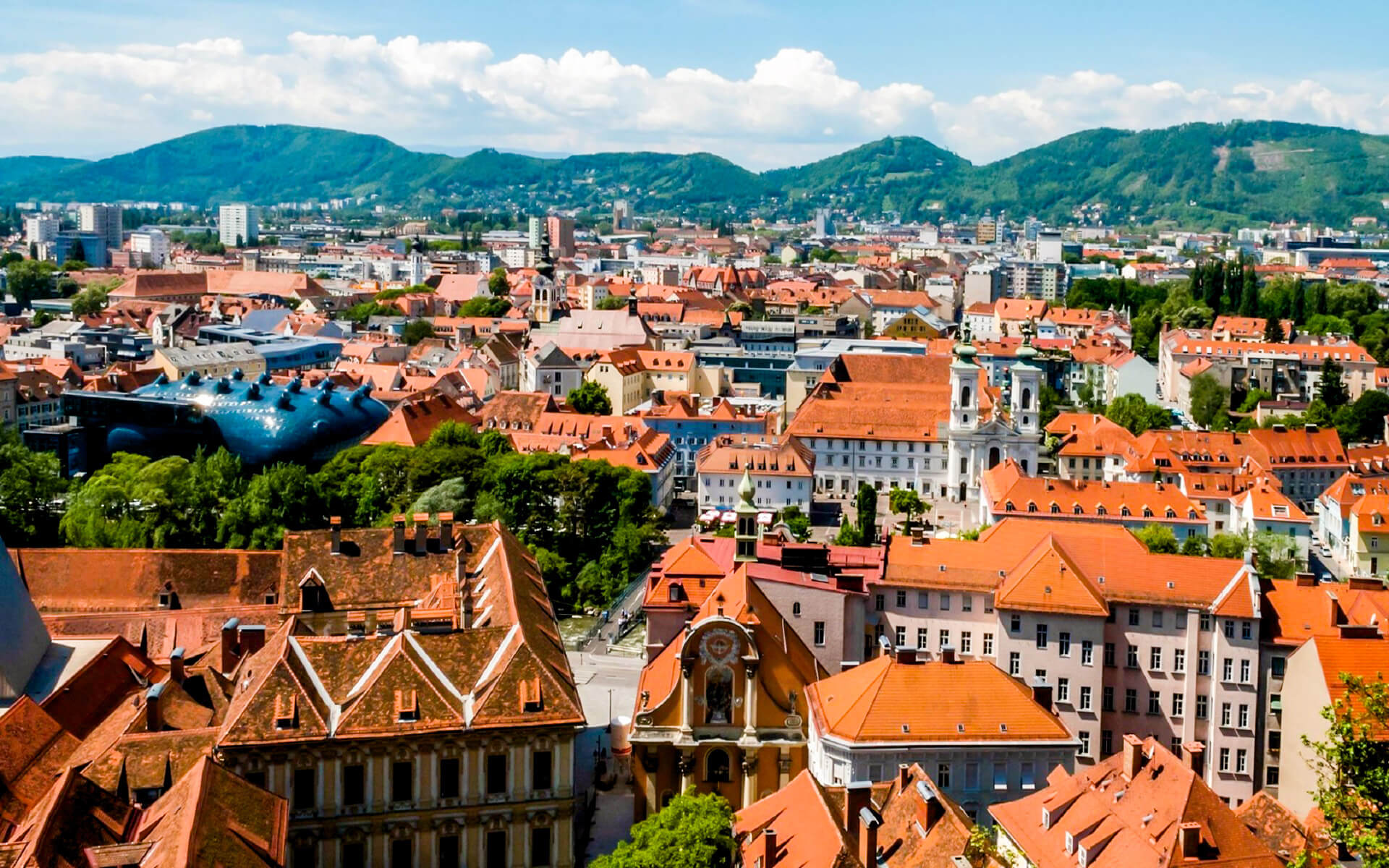 Graz has a long history as a “university town,” with six institutions and around 44,000 students. Its “Old Town” is one of Central Europe’s best-preserved city centers.

Graz was historically and culturally more significant for Slovenes than Ljubljana, Slovenia’s capital, and it continues to be so.

Graz was listed to the UNESCO list of World Cultural Heritage Sites in 1999, while Schloss Eggenberg was added to the site in 2010. Graz was named the single Cultural Capital of Europe in 2003 and a City of Culinary Delights in 2008.

Graz’s term as Cultural Capital of Europe resulted in the construction of numerous startlingly contemporary new public buildings. The most well-known is the Kunsthaus (house of contemporary art) created by Peter Cook and Colin Fournier, a museum built exactly next to the Mur River, and the “Murinsel” (island in the Mur), a steel island located in the river. Vito Acconci, an American architect, created it, and it has a café, an open-air theater, and a playground.

The old town was included on the UNESCO World Heritage List in 1999 owing to the peaceful coexistence of distinctive structures from several epochs and architectural styles. Graz, located on a cultural crossroads between Central Europe, Italy, and the Balkan states, absorbed numerous influences from the neighboring areas, giving rise to its distinctive townscape. The old town now has around 1000 structures ranging in date from Gothic to contemporary.

OUTSIDE THE OLD TOWN

Graz is protected from the predominant westerly winds that bring weather fronts in from the North Atlantic to northwestern and central Europe due to its location southeast of the Alps. Graz’s weather is consequently affected by the Mediterranean, and it enjoys more sunny hours per year than Vienna or Salzburg, as well as less wind and rain. Graz is located in a basin that is solely accessible to the south, resulting in a milder temperature than would be anticipated at that latitude. Plants that grow far further south may be found in Graz. However, the city’s air quality suffers as a result of the warmer, less windy environment, which renders it prone to smog in winter. The exhaust fumes from the approximately 120,000 automobiles driven into Graz every workday by persons living in the surrounding districts, together with car travels made by Graz residents, constitute the most major cause of air pollution.

Graz is located in southeast Austria on the Mur River. It is located roughly 200 kilometers (120 miles) southwest of Vienna. Maribor, Slovenia’s largest city, is roughly 50 kilometers (31 miles) away. Graz is the capital and biggest city of Styria, a lush and wooded region.

Sousse, often known as Soussa, is the capital of the Sousse Governorate in Tunisia. The city, which is 140 kilometers (87 miles) south of...
Read more

Grenada is an island nation in the southeastern Caribbean Sea. It consists of Grenada and six other islands near the southern end of the...
Read more

Honolulu is the state capital and the most populous city of Hawaii, located in the United States. On the island of Oahu, it is...
Read more

Sapporo is the fourth most populous city in Japan and the major city on the northern Japanese island of Hokkaido. It is the capital...
Read more

Fuerteventura (literally “strong fortune,” although others read it as “Strong Winds” or a translation of the French phrase for “Great Adventure”) is one of...
Read more

Geneva is the second most populated city in Switzerland (after Zürich) and the most populous city in Romandy, Switzerland’s French-speaking region. It is the...
Read more
Travel news