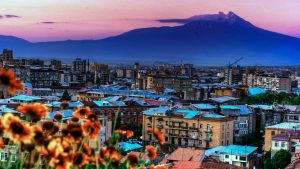 Yerevan is teeming with cafés that provide free wifi. These are also starting to appear in a number of places outside of Yerevan. Many hotels and cafés provide free WiFi to their customers. Prepaid mobile phone cards may be used to make international calls from a landline. Mobile phone providers often provide specific prefixes to dial before the number in order to utilize VoIP, which is very inexpensive and provides a high quality connection. It is also possible to hire a mobile phone for a short period of time. Regular phone calls may always be made at the post office, and they are inexpensive inside Armenia, but they are a little pricey for international calls. Look for a phone office that utilizes the internet to provide considerably lower prices. Local calls may be made via kiosks or the occasional payphone.

Phone numbers in Armenia are of the format +374 312 57659, where “374” is the country code for Armenia, the next 2-5 digits (beginning with a 1, 2, 3 or 4 in the case of land lines), and the remaining 3 to 6 digits are the “local” part of the subscriber number that can be called from within that specific area code using abbreviated dialing.

Internet telephony service providers have been given area codes beginning with 6 in order to offer non-geographically based numbers. All mobile phone numbers begin with a 9 and contain two digit mobile prefixes indicating the originating network ( Nagorno-Karabakh mobile networks that used to start with a 7 have now been re-numbered to 97).

You must dial “0” before the geographic area code if you are calling from outside that area code (but when still within Armenia).

No matter where they are called from, mobile numbers in Armenia must always be dialed with all digits (including a “0” prefixing the “9n” from inside Armenia). The 9n is a mobile prefix rather than a “area code,” and the second and occasionally third digits (the n portion) indicate the original mobile network allocated. They may also be phoned inside or outside of Armenia using the international format, as is the case with most mobile numbers. Most Armenian toll-free and Premium Rate Numbers are inaccessible from outside Armenia. The format of these numbers is 800-23-456.

In Armenia, there are three GSM service providers. It is highly recommended to get a temporary prepaid SIM card since they are inexpensive and handy, enabling both local and international calls, charging no for incoming calls, and charging no monthly cost. Mobile internet and UMTS are also available from all providers, in addition to the standard complete range of wireless services.

At the airport, VivaCell MTS and Orange provide kiosks where arriving guests may get free SIM cards. The majority of international tourists find their unlocked mobile phones (GSM 900/1800) functional with Armenian SIM cards.

VivaCell MTS and Beeline claim to reach 90% of the Armenian population with 2G services and up to 60% with 3G services. Orange presently has the least amount of 3G coverage, although it is quickly expanding. Orange’s 2G coverage reaches about 70% of the population, while Orange’s 3G coverage only covers the capital and the two second largest cities, Gyumri and Vanadzor. All of these networks are constantly developing and extending their 2G and 3G service coverage.

VivaCell MTS launched its 4G (LTE) network in January 2012, making them the first operator in Armenia to do so.