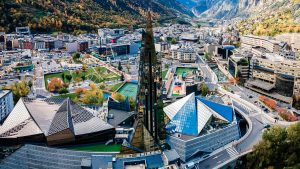 Catalan is the official and historic language. As a result, the culture is Catalan, with its own distinctiveness.

Folk dances such as the contrapàs and marratxa may still be seen in Andorra, particularly in Sant Julià de Lria. Andorran folk music is comparable to that of its neighbors, but it has a distinct Catalan flavor, particularly in the presence of dances such as the sardana. Contrapàs in Andorra la Vella and Saint Anne’s dance in Escaldes-Engordany are two more Andorran traditional dances. Our Lady of Meritxell Day, celebrated on September 8, is Andorra’s national holiday. Malvina Reynolds, an American folk singer, composed the song “Andorra” after being fascinated by their $4.90 defense budget. On his 1962 CD The Bitter and the Sweet, Pete Seeger contributed lyrics and performed “Andorra.”

Ski Resorts The majority of these resorts were originally tiny mountain towns that grew in recent years as a result of skiing. In recent years, the resorts have merged such that your ski ticket now includes access to neighboring regions. As a consequence, two major alpine skiing regions have emerged:...