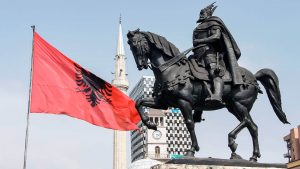 EuropeAlbaniaThings To See in Albania
September 6, 2021

Albania has a diverse range of cultural influences. The heritage of the Turks and Greeks may be seen in the south, while numerous old Illyrian remains can be seen in the north.

The coastline is usually a good location to visit, with its beautiful turquoise waters and many islands dotted along it, such as Saranda, Albania’s southernmost coastal city. It is worth noting that more than half of the coastline to the north of Vlore and up to the Montenegrin border is made up of sand beaches, while the Albanian Riviera to the south of Vlore is made up of rocky beaches. As lodging facilities along the Albanian Riviera, from Vlore to approximately Qeparo, there are mostly wooden villa complexes, bed & breakfasts, camping sites, and a few beach resorts. Llogara Pass is a mountain pass in Llogara National Park that provides a spectacular view of the Riviera from above. Cesar’s Pass lies nearby, where Julius Cesar crossed on his way to pursue Pompey.

Dajti Mountain, a famous tourist attraction in Tirana, offers a panoramic view of the city.

A stroll through southern towns such as Butrint, a UNESCO World Heritage Site, is usually perfect and unforgettable. Butrint is home to a number of ancient ruins..

Castles may be found in several Albanian cities. Their beauty harkens back to Albania’s and the world’s ancient periods. Petrela Castle is in Tirana, Rozafa Castle is in Shkodra, Berat Castle is inhabited, and Skanderbeg Castle is in Kruje (named after the national hero and now a popular museum holding his belongings).